Home » Archive » Europe » New Career For 'Angel Of The North'

New Career For 'Angel Of The North' 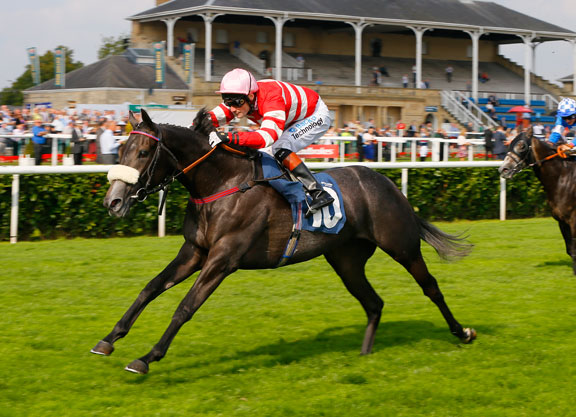 English highweight Mecca's Angel (Ire) (Dark Angel {Ire}–Folga {GB}, by Atraf {GB}), oft dubbed the 'Angel of the North', has been officially retired by her Yorkshire based trainer Michael Dods. The 5-year-old was bred by Yeomanstown Stud and bought for 16,000gns out of the Tattersalls October Yearling Sale by her trainer before passing her on to owner David Metcalfe while retaining a share for himself. She proved an inspired purchase, winning successive editions of the G1 Coolmore Nunthorpe S. at York in 2015 and 2016, as well as three additional group stakes. In all, Mecca's Angel won half of her 20 trips to the post, retiring with a mark of 20-10-4-1 and $999,035 in earnings.

Paying tribute to the filly Dods said, “You dream of having horses like her. She's won two Group 1s and she's campaigned in all the top sprints. She's given us a lot of fun and taken us to all the big meetings.”

Her owner David Metcalfe has already stated his intention of selling Mecca's Angel to continue her career as a broodmare, preferably privately as opposed to at public auction. She is the first foal out of the winning mare Folga (GB) (Atraf {GB}), who subsequently bred the group-winning sprinter and soon to be Derrinstown stallion Markaz (Ire) (Dark Angel {Ire}).