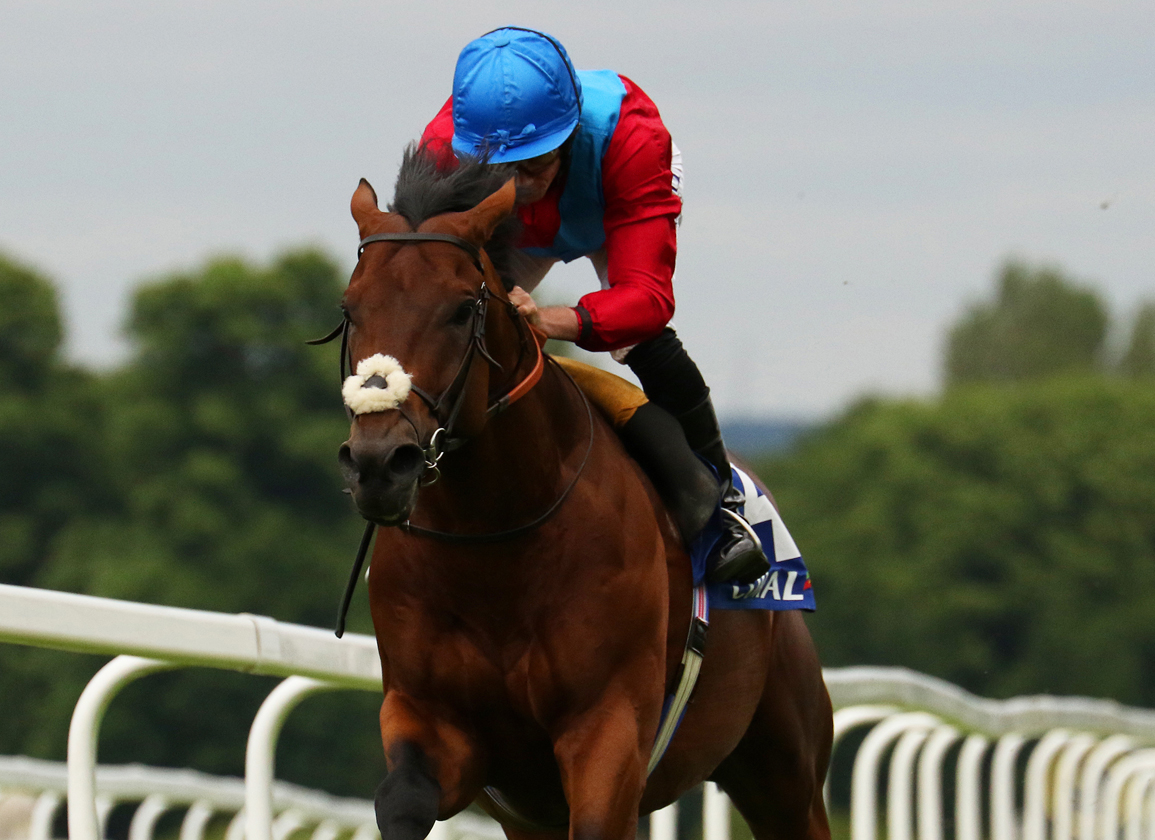 Sandown witnessed something truly special on Thursday evening as James Wigan and Ballylinch Stud's Bay Bridge (GB) (New Bay {GB}–Hayyona {GB}, by Multiplex {GB}) brought up a sensational 12th renewal of the G3 Coral Brigadier Gerard S. for Sir Michael Stoute. The way the seasonal debutante hit the line with five lengths to spare over Shadwell's exciting Mostahdaf (Ire) (Frankel {GB}), who was previously unbeaten here, with Addeybb (Ire) (Pivotal {GB}) another length away in third, it is hard to say that any of the former Freemason Lodge winners of this vital 10-furlong staging post have been any more impressive.

Finally unveiled after a winter under wraps, the Listed James Seymour S. winner who had only hinted at his deep talent in 2021 was the subject of a notable gamble into 7-4 second favouritism with Ryan Moore keen to hold on to him in fourth early. Moving to the the 6-5 favourite Mostahdaf with unerring ease approaching the furlong pole, the bay set off to the line with minimal encouragement to spreadeagle a class field. “We thought there was something special in him last year and Ballylinch bought into him in the winter,” James Wigan commented. “We have always thought a lot of him and Sir Michael's been very complimentary about him, so it is a very nice surprise. He is such a big strong boy and we rather thought in the paddock that he might just need the race, so we are particularly pleased.”

Attempts to dampen enthusiasm for this display could centre around the fact that Mostahdaf was carrying a three-pound penalty for a win in the G3 Gordon Richards S. and that Addeybb was coming back from a lengthy spell out due to serious illness, but Bay Bridge was himself operating under a mix of inexperience and rustiness that should have curtailed something this impressive. Brought along quietly last term, he broke his maiden first up and at the third career attempt by five lengths over this trip on Newcastle's Tapeta in April but sidestepped anything major and instead added Newbury's prestigious London Gold Cup to his tally by four the following month. His light was still under a bushel when next appearing after a sizeable break with a half-length verdict in another handicap at York in early October and he was still only pushing a small amount of his raw material at Newmarket when upstaging Majestic Dawn (Ire) (Dawn Approach {Ire}) in the James Seymour late that month.

While not exactly a ghost orchid to date, Bay Bridge is now out in the harsh rays as he catapulted himself to another environment altogether. “He is in the Prince of Wales's and the Hardwicke,” Wigan added. “We will ask Sir Michael what he thinks, but I think we will probably be inclined to stick to a mile and a quarter at the moment. I think we would have thought he would go to group one level, as he has won a group three with some good horses in the race today. Ryan said he didn't have to get too serious with him and he is a very exciting prospect.”

“What excited me was the way he quickened away from good horses,” Wigan continued. “He was sitting there going easily and you could see Ryan did not want to expose him too early and he was keeping him in. There was obviously something in the tank and he didn't know what. I would have thought, on the dam's side, a mile and a half would be within reach.” Moore added, “He picked up very nicely and went through the line well. He had a few issues last year, nothing major, he just had to wait but he has improved with every run.”

Mostahdaf's rider Jim Crowley admitted to an element of surprise afterwards. “I thought he ran a good race and I hold my horse in quite high regard, but the winner came past me quite easily and was very impressive,” he said. “I think my fellow would like faster ground, but there are no excuses–we were in the right spot, it's just the winner is a very good horse. I'm sure there are top races in our lad throughout the season.”