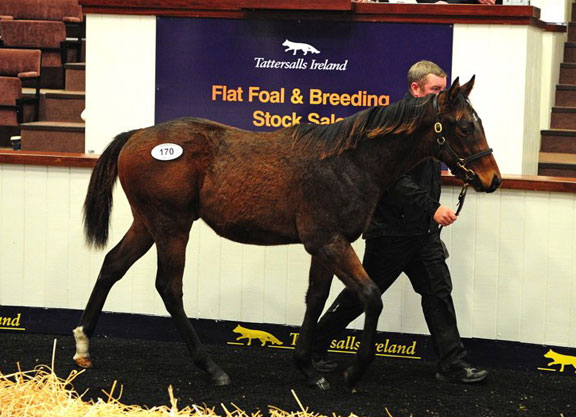 The first two New Bay (GB) foals to take their turn in a sales ring-and the only two by the stallion in the sale–were offered at the Tattersalls Ireland Flat Foal and Breeding Stock Sale on Friday, and they returned the top price for a weanling colt and filly, respectively. Lot 170 was the top lot with a pricetag of €60,000. The colt, the first foal out of Soteria (Ire) (Acclamation {GB}), a daughter of the multiple stakes producer Roo (GB) (Rudimentary {GB}), was bought by Powerstown Stud. The other New Bay, a filly (lot 164), brought €20,000 from Mark Byrne. Both horses were bred by China Horse Club, a shareholder in the G1 Prix du Jockey Club winner New Bay, who stands at Ballylinch Stud for €15,000. Both were consigned by Baroda and Colbinstown Studs.

“This is a well-made colt by a Group 1-winning son of Dubawi,” said China Horse Club's Mick Flanagan of the top lot. “I spent the day chewing on Gaviscons, all because of rising stud fees in Europe. The progeny by New Bay are very exciting and he is very good value in 2019 at €15,000. Sometimes things that happen in the past tell us a little bit about the future, and given New Bay was bred and raced by Juddmonte, much like Danehill and Showcasing were, I think he looks to be a stallion to get involved in if in any way possible.”

“He has a good page, and it's a happening family–there is a Horris Hill S. winner in there now, too,” said Whitehead. “New Bay was a good racehorse and is by Dubawi too. The plan will be to resell next autumn.”

The second-highest price on the day for a foal was the €44,000 Tally-Ho stud shelled out for lot 71, a colt by Dandy Man (Ire) from the family of Group 1-winning sprinter Kingsgate Native (Ire). The sale's highest-priced mare was Shadwell's stakes-placed Naadrah (GB) (Muhtathir {GB}) (lot 222), who was bought by Herbertstown House for €42,000 in foal to Derrinstown Stud resident Awtaad (Ire). Ronan Burns of Herbertstown said, “She is a good-looking mare and was stakes-placed, while her 2015 foal Moonlight Bay has reached a rating of 95. The mare is in-foal to a Classic winner on a February cover.”