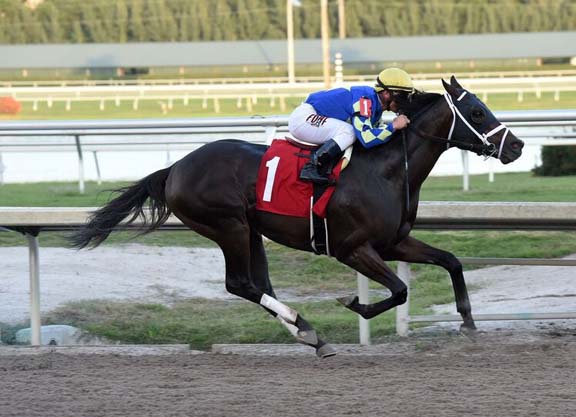 Starlight Racing's Neolithic (Harlan's Holiday), auditioning for a potential start in the Jan. 28 GI Pegasus World Cup, romped home a dominating nine-length winner as the 1-5 favorite in a 1 1/16-mile allowance at Gulfstream Park Wednesday. After setting early fractions of :23.28 and :45.97, the 3-year-old colt completed the mile in 1:35.28 and his final time of 1:41.58 was just off the track record of 1:40.97.

“I'm usually not overconfident, but when one of the partners asked me today how he'd run, I said, 'I think he goes off at 2-5 and wins by six lengths,'” said Starlight's Jack Wolf. “But the way he did it was very impressive, especially the second quarter he went pretty fast, and that gave me a little pause, but he kept it up.”

Neolithic broke his maiden going 1 1/16 miles at Gulfstream last December, but was then sidelined for eight months. Second in a pair of New York allowance races, he was coming off a runner-up effort in the Nov. 12 GIII Discovery S. at Aqueduct.

“He has always been a very good horse for us,” Wolf said. “We had to stop on him because he had some issues and then we brought him back. He's always wanted two turns and the allowance races that we ran in at Saratoga just happened to be at seven furlongs and we just had troubled trips. [Trainer] Todd [Pletcher] never gave up on thinking the horse is a good horse.”

Asked if the allowance win had earned Neolithic a shot at superstars California Chrome (Lucky Pulpit) and Arrogate (Unbridled's Song) in the Pegasus next month, Wolf said, “I would think so. The thing that is lacking in the Pegasus is a horse familiar with the course and this horse has obviously won twice there going two turns. So I think that makes him appealing. Although, he could possibly run in the AE race on the undercard [Poseidon S.]. We'll keep all of our options open at this point and see how he comes out of the race.”

Wolf remained realistic about his chances against the pair of California heavy hitters.

“He definitely stamped himself as one of the prospects for the race, but having said that you've got Arrogate and California Chrome in there and there is no way you could see this horse running the kind of race that those horses have run,” Wolf said. “He's been over the course and he's relatively fresh, but the true class of the Pegasus will obviously be those two.”