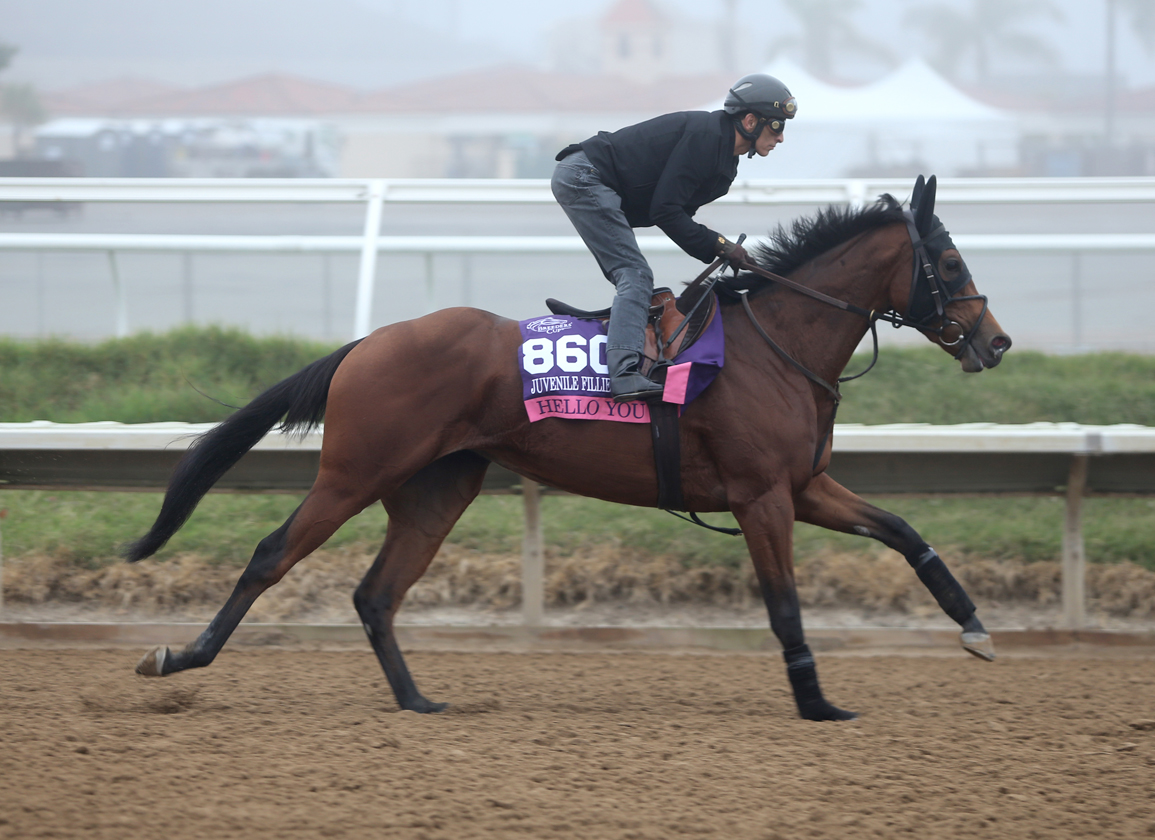 The Classic trials caravan rolls into Newmarket today with the Rowley Mile venue primed and ready to host a seven-race card and open its three-day Craven fixture. Sophomore fillies take centre stage on day one with nine set for another competitive edition of HQ's G3 Lanwades Stud Nell Gwyn S. over a straight seven furlongs. Middleham Park Racing's 2012 victrix Esentepe (Ire) (Oratorio {Ire}) is the only winner since the turn of the century to have undertaken a preparatory run, so the trends are not in favour of Scuderia Archi Romani & Partner's hitherto undefeated Ribbon Rose (GB) (Time Test {GB}), who makes her stakes bow coming back off seven-furlong score at Kempton last month. She had previously graduated over this course and distance in October.

Top billing in this G1 1000 Guineas trial is shared by familiar rivals Hello You (Ire) (Invincible Spirit {Ire}) and Cachet (Ire) (Aclaim {Ire}), with the former leading their ongoing series 2-1. Amo Racing's Hello You placed ahead of Cachet in Royal Ascot's G3 Albany S. and was too good for Highclere Thoroughbred Racing's 'TDN Rising Star' when best in September's G2 Rockfel S. over this strip.

“Hello You might just need her first race,” admitted trainer David Loughnane. “If she does, she does, but if she doesn't, she'll be there in the business of things. It is a long season ahead and we didn't want to overcook her. She has grown nicely, she has done very well and we are very happy with her. She did a nice piece of work 10 days ago at Wolverhampton and we are very pleased with her. She has proved she goes on any ground and has handled most tracks. She was very consistent last year and you never know until you run them whether they have trained on or not, but she has certainly shown the right signs.”

Cachet gained a small measure of revenge when a close-up fourth, one place and 3/4-of-a-length ahead of Hello You, in Del Mar's GI Breeders' Cup Juvenile Fillies Turf last November. “That [Breeders' Cup] form was given a good boost when Francis-Henri Graffard's horse [Malavath] won [the G3 Prix Imprudence] in France and that was nice to see,” said trainer George Boughey. “Although Cachet was busy at two, she had a good break in the middle of the summer and had a proper break at the National Stud in the winter. Fortunately, she has come back and not missed a day's training, so it is one of those things where she has been pretty straightforward. If she had missed, she would be behind the kick, but she hasn't. She looks great, she is a filly who got physically better as the year went on and I think she will do that again. I think her career best was on firm ground at Del Mar and I have never really worried about the ground with her. She has a fast-ground action and seems to handle anything. This is a good stepping stone [to the G1 1000 Guineas] and looks a race where she should be very competitive.”

William Stone trainee Romantic Time (GB) (Time Test {GB}) is better than her seventh to Hello You and Cachet in the Rockfel and had Sheikh Rashid Dalmook Al Maktoum's Perfect News (GB) (Frankel {GB}) back in eighth when annexing Salisbury's G3 Dick Poole Fillies' S. earlier in September. British bookmakers rate Perfect News, who has since finished third in the Oct. 8 G3 Oh So Sharp S. over course and distance, as a 5-1 chance and Romantic Time at much higher odds of 16-1.

Five have been nominated for the first stakes heat of the day and Godolphin's Listed Pat Eddery S. winner and G3 Prix La Rochette fourth New Science (GB) (Lope de Vega {Ire}) will be a warm order for the Listed European Free H., another Guineas trial over seven furlongs.

The €260,000 Arqana Select yearling has the benefit of match fitness this term, having posted a staying-on third tackling one mile in Meydan's Feb. 3 Listed Jumeirah Classic when last seen, and Charlie Appleby is hopeful of a good effort in this European return. “New Science has definitely come forward from his run in Dubai,” the trainer revealed. “If he brings the best of his 2-year-old form to the table, it will make him very competitive.”

He is confronted by Shadwell's homebred Ribhi (Ire) (Dark Angel {Ire}), who bookended a fifth in September's Listed Flying Scotsman S. at Doncaster with victories in six-furlong contests at Salisbury, Listed Prix Zeddaan victrix Honey Sweet (Ire) (Adday {Ire}), the Richard Hannon-trained G3 Horris Hill S. third Tacarib Bay (GB) (Night of Thunder {Ire}) and Listed Stonehenge S. second Power of Beauty (Ire) (Slade Power {Ire}). “Ribhi seems to be going there in good form, he is in good shape and I'm looking forward to seeing him run,” said trainer Marcus Tregoning. “Hopefully he will run well and we gauge something from the race, although it is difficult to gauge things in a small field. It is a fact-finding mission, but going back up in trip should help.”