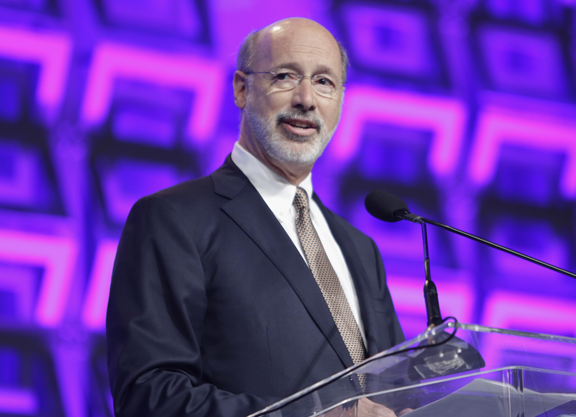 Addressing the plight of the state's racetracks on Tuesday, Pennsylvania Governor Tom Wolf laid out a difficult path that must be followed before the state's three Thoroughbred tracks can start running again.

As is the case with many governors, Wolf has put forth a plan that calls for the state to reopen in stages, in Pennsylvania's case red, yellow and green phases. While horsemen have advocated that racing, without spectators, should be among the first businesses in the state to reopen, Wolf said the tracks cannot resume racing until their geographic areas have been placed in the green category.

Wolf's statement came in response to a letter sent to him by Pennsylvania Racing Commission Chairman Russell Redding that stated the case being made by racing interests that it was safe to begin racing again. Wolf wrote: “We foresee horse racing reopening when counties enter the green phase, like other entertainment.”

Nowhere in his letter to Redding did he bring up the sport's position that it can run safely without spectators and that racing under those conditions has been conducted in a number of other states.

“Broad re-openings or re-openings that are not structured around ongoing social distancing, universal masking, or other public health guidance would likely result in a spike of cases and new stay-at-home and closure orders,” he wrote.

“Looking at the response he sent to the racing commission, it's not clear if he really grasps what is being asked of him,” said Pete Peterson, the president of the Pennsylvania Horse Racing Association, which represents horsemen and breeders in both Thoroughbred and Standardbred racing. “We were not asking to re-open racing as normal. It was to have live racing with no fans. He compared racing to movie theaters and casinos. They are indoor activities with patrons interacting with one another. There is no comparison. I'm not sure he fully understands what the racing industry is seeking.”

The red, yellow, green phases are decided on a county-by- county basis. The majority, including the counties that are home to Parx Racing and Penn National, remain in the red phase and none has moved on to green. Presque Isle Downs is in a “yellow” county.

The green phase is when all businesses in the state are allowed to open and includes businesses like casinos and movie theaters, indoor businesses where social distancing is particularly difficult. A county's status is determined by per-capita virus case counts, ability to do tracing and testing and population density.

There has been no racing in the state since Mar. 16, and Peterson noted how difficult the shutdown has been on horsemen.

“We're getting to the point where we are going to have an equine welfare crisis,” he said. “Without people having an income source, they are facing challenges caring for their own families, let alone the horses in their care. They need to start seeing some income coming in so they can care for these equine athletes.”

Joe Taylor, the leading trainer in wins at Parx in 2019, said he has grown so discouraged by the Pennsylvania situation that he is sending strings of horses to Gulfstream and Charles Town.

“This is just devastating,” Taylor said. “I'm not very optimistic about when Parx is going to reopen or how Parx is going to come out of this,” he said. “We should be running. I don't see a light at the end of the tunnel anymore. I know people were hoping we'd be running by June 15, but I think getting into the green area by then would be almost impossible. We have to start making some money. Like the rest of the people in our business we are going broke.”

This is not the first time the racing industry has been upset with a Wolf decision. In February, he issued a budget plan that called for the $204 million that annually goes to purses from slots revenues to be diverted to a fund that would provide college scholarships for Pennsylvania residents.