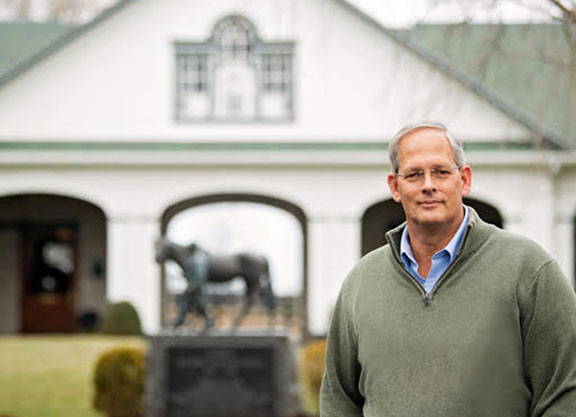 Business is booming at Spendthrift Farm. The once-defunct stallion station has enjoyed a remarkable resurgence in the past decade, thanks in large part to a superstar stallion, a deep-pocketed owner and the steady hand of an experienced general manager. Ned Toffey has seen it all since B. Wayne Hughes purchased Spendthrift in 2004, and he joined the TDN Writers' Room presented by Keeneland Wednesday. Calling in via Zoom as the Green Group Guest of the Week, Toffey talked about the explosive growth of the farm, what makes Into Mischief special, likely Horse of the Year Authentic (Into Mischief), the future of recent Spendthrift purchases Monomoy Girl (Tapizar) and Got Stormy (Get Stormy) and much more.

“Once we did some renovations here at Spendthrift, we brought Malibu Moon over and really thought that was going to be our flagship horse. And all the while there was this little son of Harlan's Holiday we bought for $180,000,” Toffey recalled when asked about Into Mischief. “The first couple of years he was here, he was a very tough sell. One of the programs that we did, 'Share the Upside', was actually designed to help sell seasons to Into Mischief. But it turned out to be the opposite. Into Mischief made the program. He gave us credibility and has given us the confidence to start to go after other top horses. He's done so much. He drives traffic to the farm. We'll be fortunate if we can ever have another one as good as him. People give us a lot of credit for having 'made' Into Mischief. We're happy to take that credit, but I think the credit goes to Into Mischief.”

“We wanted to have some marquee mares to breed Into Mischief, Authentic and even some of the stallions that came in within the last year as well,” Toffey explained. “We generally will move our own mares out of the way if we have clients that really need to get their mares bred. So oftentimes some of the mares that we start out planning to breed to some of these stallions, end up getting bred to somebody else. This year we wanted to have some mares that we just felt were really strong. We may not breed a lot to Into Mischief. Mr. Hughes usually likes to collect the stud fee and make room for our clients. But now we've got a handful of mares that will certainly need to go to Into Mischief, Authentic and the likes of those.”

Asked about the reasoning for retiring Authentic as a 3-year-old while bringing Monomoy Girl and Got Stormy back to the racetrack in 2021 as 6-year-olds, Toffey offered, “You're talking about a little different price point. We were wide open in terms of what we might do, but his racing career just went so well and Bob [Baffert] said, 'He's done so much. He's done everything that he really can.' And our primary business is breeding. That's what drives things here and the stallion complex is the epicenter of Spendthrift. That is our primary focus and everything we do revolves around that. He's such a sound, talented horse, it was very tempting to go on and run next year, but again, this is such a central part of what we do, we felt like it was time for him to come and start his career here.”

Elsewhere on the show, the writers debated which Eclipse categories are still to be decided, appreciated strong 2-year-old performances from the weekend and, in the West Point Thoroughbreds news segment, broke down the latest developments in the indictments surrounding Jason Servis and Jorge Navarro. Click here to watch the podcast; click here for the audio-only version.