Near Record Field Lines Up at NHC 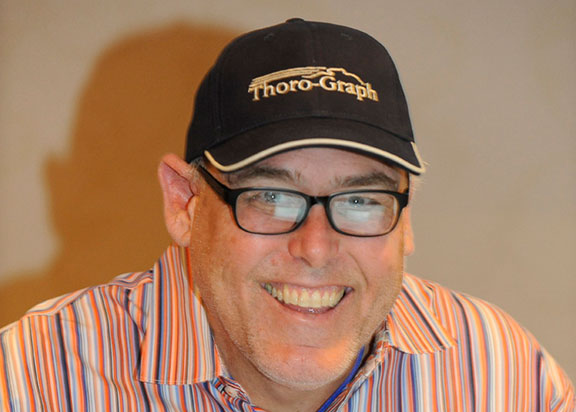 A near-record field of 670 entries are set to battle it out this weekend in Las Vegas at the 20th NTRA National Horseplayers Championship, presented by Racetrack Television Network, STATS Race Lens and Treasure Island Las Vegas. On the line is $2.9 million in cash and awards, as well as bragging rights as the Eclipse Award “Horseplayer of the Year.” Both the field size and the prize money are second-highest in tournament history. The three-day NHC begins today and runs through Sunday, with action centered at the Treasure Island Ballroom.

Cumulative scores will be tallied Friday and Saturday, and the top 10% of the field will make it through to Sunday’s semifinal. From there, the 10 highest players advance to the Final Table, where they’ll try to add to their existing bankrolls. The tournament is based on mythical $2 win/place wagers. To ward against a massive longshot affecting the standings to an unreasonable degree, win bets are capped at $42 (20-1) and place bets at $22 (10-1).

The first two rounds and Sunday’s semifinal are a mix of mandatory and optional races. There are eight mandatories and 10 optionals on each of the first two days for a total of 36 races. The semifinal round is comprised of 10 races, all optional, while players at the Final Table are assigned seven mandatory races. The NHC first prize is worth $800,000.

“We are delighted to play host to many of the nation’s top horseplayers at the historic 20th NHC,” said Keith Chamblin, the NTRA’s chief operating officer and NHC tournament director. “The NHC is a true celebration of the horseplayer–the individuals who fuel every aspect of the sport and business of Thoroughbred racing.”

A player can hold a maximum of two entries, and there were 138 dual-qualifiers heading into yesterday’s Last Chance Tournament, also held at Treasure Island. Regardless of the outcome of that tournament, there will be plenty of new faces at the NHC. There are 118 rookies, representing almost a quarter of the field.

Back to defend his title is Chris Littlemore, who was on hand in Miami to collect his Eclipse Award. The Whitby, Ontario resident amassed a bankroll of $348.30 a year ago from his 53 mythical bets. No person has ever won the NHC twice, and in addition to a stacked field, Littlemore faces six other returning champs: Ray Arsenault (2017), Paul Matties Jr. (2016), Jim Benes (2013), Michael Beychock (2012), Richard Goodall (2008), and Stanley Bavlish (2007).

At least two players are up from massive bonuses should they win. David Gutfreund secured $100,000 and a berth to the NHC by taking the NHC Tour, a year-long series of NTRA-sanctioned local tournaments, and could take down as much as $6 million in bonuses if he’s the last handicapper standing on Sunday. Chuck Grubbs, meanwhile, won the Breeders’ Cup Betting Challenge at Churchill, and is eligible for the $3 million BCBC/NHC bonus.

An NHC scoreboard will be updated regularly at www.ntra.com/nhc. To keep up on the action live, catch At the Races with Steve Byk on SiriusXM (Sirius 219; XM 201) from 2-7:30 p.m. ET daily; and catch updates on Twitter at @thorostride and @thetdn.

Stauffer Back at NHC

Oaklawn Park track announcer Vic Stauffer is back for his third go at the NHC, and he’s confident about one thing.

“If the person who has done the most work comes out on top, it’ll be me,” he said.

Reached by phone Wednesday in Arkansas, Stauffer was knee deep in past performances and had been handicapping since he woke that morning. “And I’ll keep at it until I fall asleep tonight,” he said. “But listen, I’ve done the most work the three previous years, and the best I could do was 122 [in 2018].”

Stauffer has qualified for the NHC three times previously and competed twice before (a stint as a steward in California precluded participation in one event). He had two entries in 2016, finishing 129th and 147th, and had two more a year ago, finishing 122nd and 317th. He carries two entries into the 2019 renewal, and talking to Stauffer, it’s clear he takes his handicapping as seriously as he takes his race calling. His passion is such that Oaklawn agrees to relieve him of calling duties each year for a weekend should he qualify.

So what’s the appeal of the NHC? “The world’s watching,” Stauffer said simply.

Stauffer is a long-time handicapper who began playing tournaments several years back, in part because they provided a needed structure.

“I found tournaments interesting because of the additional strategy that goes into them, but probably more than anything else, I wasn’t the most disciplined gambler ever,” he explained. “In fact I was pretty undisciplined. So if I had a bad day, I’d chase with bets I’d never make if I was ahead or even. And you shouldn’t do that. The structure of tournaments prevents that. You have a finite amount of money you risk. If it goes good, you win. If it goes bad, you don’t. But you can’t lose any more than what you put up to play the tournament.”

In a short period, Stauffer became a formidable tournament player. He won the 2016 Del Mar Fall Challenge, the 2017 Santa Anita Preakness Challenge, and had high finishes in consecutive renewals of the Breeders’ Cup Betting Challenge in 2016 and 2017.

Stauffer is in a unique position. Of the 530 or so individual players at the NHC, he’s one of only a handful who make their living full-time in horse racing. In addition to race calling, he’s worked as a steward, a jockey’s agent, and an assistant racing secretary, and has owned horses. He currently serves as an analyst at TVG, as well. And all that, he said, is a difference maker.

On the last point, Stauffer gives an example. He was working at Hialeah and stuck around after the season to bet Gulfstream. One day he was asked to sub for Caton Bredar doing paddock interviews, and interviewed Bill Mott on the afternoon Cigar won the GI Donn H.

“Mott was the leading trainer at the time, and I asked him about it, and people thought he was being a smart-ass when he gave his answer,” said Stauffer. “But I knew he wasn’t, and I know to this day he wasn’t.”

Stauffer’s question: What does it take to be leading trainer? Mott’s reply: Running 8-5 shots.

“And people were like, ‘Well duh,'” said Stauffer. “But the point he was making is that if you have a horse ready to run his best race, and he finishes a good 4th at 40-1, you’re an idiot. You have to have that horse in the right spot to win.”

At the track, Stauffer says he’s almost exclusively a win bettor. “Some exactas, but the great preponderance of my play is win bets,” he said. “If I can target a horse I feel the public has made a mistake on, I don’t feel the need to branch out. It’s also the most economical bet, costing 14 cents [takeout] for every dollar and not 22 cents. It’s not the most glamorous, but to me it’s the truest test of a handicapper. With win bets, you’ll find out very quickly whether you know what you’re doing.”

Stauffer does, and recently began a service selling Santa Anita picks for the weekend cards (www.vicstauffer.com).

“The way it’s evolved, and the response I’ve gotten to it, has been so incredibly gratifying,” he said. “And it’s not necessarily from picking winners. What people are saying is that they really appreciate seeing how I break down a race, and that they’re learning from that. And listen, I’m an adulation junkie. That’s a stone-cold hard fact. So when people give me ‘atta-boys and say I’m terrific at something, I like that.”

Ego aside, said Stauffer, there’s also an important component that involves developing the next generation of horseplayers.

Stauffer said the new venture is a team effort between himself and his wife Tina. “I couldn’t do any of this without with my wonderful wife Martina Stauffer, and that’s not just me trying to curry favor,” he laughed. “She handles all the web site stuff–she’s the marketing manager, the CFO, the head of client relations. She literally does everything.”

For Stauffer, making the trip from Oaklawn isn’t just about returning to the NHC. It’s about returning to his adopted home. Last year, after the Oaklawn season ended, he and Tina moved to Peccole Ranch, a suburb about 10 miles from the Las Vegas strip. But don’t get the wrong impression–the Stauffers didn’t move for the Vegas glitz and the glamor.

“We could just as well be in Nebraska,” Stauffer said of the laid-back neighborhood. “We like the strip, and going down to a buffet or seeing a show, but it’s a community that really doesn’t have anything to do with what people think of Vegas.”

When it comes to the handicapping process, most players have a particular approach, and Stauffer was asked about his.

“Every race I make a wager on will basically have four components,” he explained. “1) I will have watched replays on every horse in the race. At least their last race, and oftentimes more. 2) I will get a feel for how the race is going to play out. If I don’t have a good feel for that, I usually won’t play. 3) I try to get a feel for owner/trainer intent. And 4) At the end of the day, I’ll never make a bet–never–without consulting Thoro-Graph.”

Stauffer is an effusive fan of Jerry Brown’s speed figures. “If I had to handicap a race and was given only one tool, it would be Thoro-Graph 100 times over,” he said. “Beyer [Speed Figures] are like a Chevy Nova, and Thoro-Graph [figures] are like a Maserati. Which isn’t to say I don’t have a huge respect for Andy Beyer. He realized something a long time ago that people didn’t understand. People bet billions of dollars based on all kinds of things other than the simple fact that fast horses beat slow horses. And he was able to reduce that to a single number. But the Thoro-Graph figures are 10 times better because they’re more sophisticated and you can completely and implicitly trust the number. And I do.”

At the end of the day, however, Stauffer said that, for him, there is no substitute for hard work.

“I wish I knew some shortcuts and I don’t,” he said. “I have to start at Race 1, Horse 1, and go from there. There are guys out there who are better than me that don’t put in that much time, but I don’t know how to do it any other way. So it becomes a gothic amount of work. But it’s like Beyer said: If you can pick a winner, you can predict the future, and you feel like King of the World. That’s very intoxicating to me and my 700 compatriots who are going to try and stand up there and be champion.”