Unbeaten superstar sophomore and ‘TDN Rising Star‘ Nadal (Blame) exited a breeze Thursday morning with a condylar fracture and has been retired. The Bob Baffert trainee was credited with a four-furlong drill in :48.80 (7/45) (XBTV Video) at his Santa Anita home base before X-rays revealed the injury and he underwent surgery, requiring two screws.

“I always say to get my trophies–and I have three Eclipse Awards and one Cartier–you have to get massive scars along the way,” co-owner George Bolton told the TDN. “You have to understand days like this will happen. This is a very sad day. It’s very hard to get these kinds of horses.”

Bolton said the surgery went well and that the injury could have been much more severe if it hadn’t been caught when it was.

A $65,000 KEESEP yearling turned $700,000 Fasig-Tipton Gulfstream juvenile purchase by Kerri Radcliffe off a :10 flat breeze, the bay colt is owned by Bolton, Arthur Hoyeau, Barry Lipman and Mark Mathiesen. A debut winner in Arcadia Jan. 19, he added a sprint score in the GII San Vicente S. Feb. 9 before stretching out effectively while surviving a hot early pace in the GII Rebel S. at Oaklawn Mar. 14. Nadal was last seen winning the faster division of the GI Arkansas Derby May 2–stablemate Charlatan (Speightstown) won the other division. He was expected to compete next in the GI Belmont S. June 20. 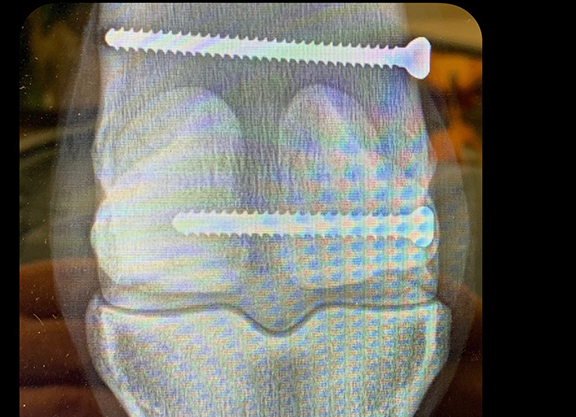 “It would have been really fun to see him against Tiz the Law (Constitution) in the Belmont,” Bolton said. “I think both are really goods horses. It was going to be like Green Bay vs. New England. That’s the sad part. When a horse gets hurt you wind up getting a bill and no more fun. We thought this was going to be a really exciting summer ahead.”

Nadal hails from the extended female family of champion Pleasant Stage and Grade I winners Marsh Side, Changeintheweather, A Phenomenon and Seattle Meteor.

“He’s going to have a great career at stud,” Bolton said. “He took a second to wind up. Coming out of the gate, he wasn’t a little bottle rocket. Once he got going three or four strides later, he was a :21, :43 horse. That’s what the breeders want. His resume includes the San Felipe and the Arkansas Derby, two great stallion-maker races.”

Bolton said that the phone had been “ringing off the hook” from stud farms calling to secure Nadal’s breeding rights, adding, “Spendthrift [Farm] is in the pole position.”

The Nadal news comes just days after reports that two Baffert trainees from that May 2 Oaklawn card–believed to be Charlatan and allowance winner Gamine (Into Mischief)–tested positive for an illegal substance.