Mystic Guide Much The Best in the Dubai World Cup 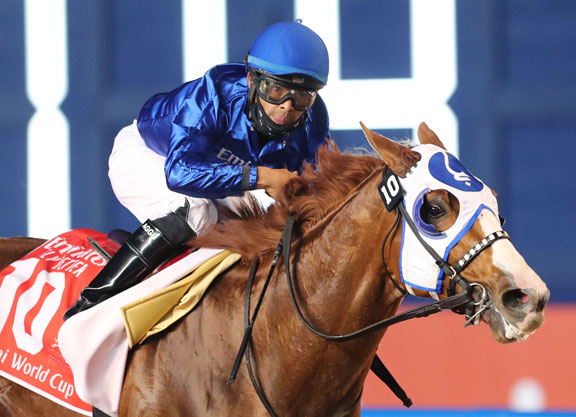 On paper, the 25th running of the G1 Dubai World Cup looked a wide-open affair. At the end of a mile and a quarter on the Meydan dirt, however, it was the international favourite Mystic Guide (Ghostzapper) who posted a straightforward and convincing victory for owner/breeder Godolphin and trainer Mike Stidham. It was a ninth win in the Dubai World Cup for Godolphin-and a first trained from the U.S.-and the 12th American-trained winner overall.

The $12-million race with not without its drama, with two horses-Great Scot (GB) (Requinto {Ire}) and Military Law (GB) (Dubawi {Ire})-getting lose in the preliminaries and subsequently scratching-but once the gates sprung at last it was soon apparent that Mystic Guide would be a force to be reckoned with. Away with the field from gate six, the 4-year-old settled on the heels of last-out G1 Al Maktoum Challenge R3 second Hypothetical (Ire) (Lope De Vega {Ire}) on the run into the first turn, with a keen Capezzano (Bernardini) passing him on the outside to provide further cover. Luis Saez soon switched Mystic Guide out to the three path to track that pair about three lengths adrift, with G1 Champions Cup scorer Chuwa Wizard (Jpn) (King Kamehameha {Jpn}) back on the rail in fourth. Mystic Guide began to inch closer at they approached the turn, first overtaking a tiring Capezzano and then drawing even with Hypothetical as they cornered. The favourite never looked like a loser after straightening, and he pulled clear under minimal urging from Saez to post a three-length score over the staying-on Chuwa Wizard. Andre Fabre's Magny Cours (Medaglia d'Oro), making his dirt debut off three straight wins over the turf and all-weather in France, made eye-catching late progress after racing midpack to be third for Godolphin.

Stidham was having his first runner outside the U.S., having taken out his training license in 1980.

“I want to start by giving my condolences on the passing of Sheikh Hamdan,” said Stidham. “This was a special night. You're seeing 40 years of emotions right now.

“I am so happy to be here and the horse performed to his capability. It's a beautiful thing. He was getting antsy in the parade ring and then with a loose horse it made it more difficult, then we had to load a couple times. It was a little scary at the start but he stayed relaxed.

“All that added to the concerns. He gets a little tough and doesn't like being restrained a lot. I saddled him outside the stall because he was getting a little antsy in the stall. With all that went on, I was really concerned, like I said, but he overcame it.

“I got a good feeling when I saw him lying in third on the backside then down the lane it was amazing. I'm so proud to be here on the 25th anniversary of the Dubai World Cup for Sheikh Mohammed and the sky's the limit for this horse. We'd love to come back next year, I'll know the lay of the land better then.”

Saez added, “Our plan worked out. To break well, get a position and then I knew he would give me that kick at the top of the straight–and he did. I didn't want to be too far back and I just asked him turning for home and he kicked. The plan worked out perfectly. He's a young horse and last time I rode him I knew he was a Group 1 winner.

“Today he proved he is a champion and I know he is going to get better and better. What a nice horse, he has all the ability. It's an honour for me. This was my dream as a little kid and I can't believe I'm here now. It's a dream come true.

“He was a little nervous before the race and in the post-parade, but he does that sometimes and I wasn't too worried. He is just a very talented horse and it is amazing to win this race. I can't believe it.”

A debut third after traveling wide going six furlongs at Fair Grounds last February, Mystic Guide broke his maiden by five lengths stretching out to 1700 metres five weeks later. Five lengths second in a first-level allowance at Belmont Park on June 4, the chestnut was third on his stakes debut in the GIII Peter Pan S. at Saratoga. Rather than targeting the U.S. Triple Crown rearranged by Covid-19, Mystic Guide reappeared in the GII Jim Dandy S. at Saratoga on Kentucky Derby Sept. 5, winning by three-quarters of a length. Moving into Grade I company and stepping up to a mile and a quarter for the first time in the Oct. 10 GI Jockey Club Gold Cup, Mystic Guide posted an ominous sign of things to come with a staying-on second. A six-length romp in the Oaklawn Park mud in the Feb. 27 GIII Razorback H. was his lone prior start in 2021.

Mystic Guide is the sixth foal and first stakes winner out of Music Note (A.P. Indy), who was bred by Sheikh Maktoum's Gainsborough Farm and trained from Saeed bin Suroor's former American base to win the GI Mother Goose S., GI Coaching Club American Oaks and GI Gazelle S. as a 3-year-old in 2008 before adding the GI Ballerina S. and GI Beldame S. in 2009. Music Note is a half-sister to Musical Chimes (In Excess {Ire}), who was raced by Sheikh Maktoum to win the G1 Poule d'Essai des Pouliches with Andre Fabre and later the GI John C Mabee H. with Neil Drysdale. Music Note and Musical Chimes are out of the unraced Sadler's Wells mare Note Musicale (GB), who is out of the champion 2-year-old filly and five-time Grade I winner It's In The Air (Mr. Prospector), who was bought by Darley for $4.6-million at Keeneland November in 1984 in foal to Seattle Slew, with the resulting filly being the G2 Criterium de Maisons-Laffitte scorer Bitooh (GB). Another daughter of It's In The Air, Try To Catch Me (Shareef Dancer), produced Sheikh Maktoum's G1 Champion S. and GI Charles Whittingham Memorial H. and GI Clement L. Hirsch Memorial Turf Championship victor Storming Home (GB) (Machiavellian).

Music Note has a 2-year-old filly by Maclean's Music named Gina. She didn't have a foal in 2020 and foaled a Medaglia d'Oro colt on Saturday morning, just hours before Mystic Guide's victory.