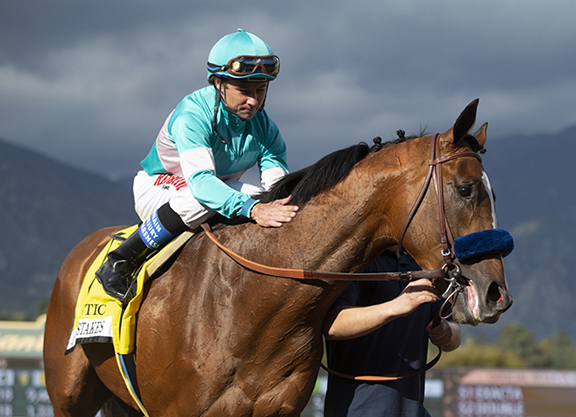 If you've got a dream and $206 you, too, can own a piece of a contender for the GI Kentucky Derby. MyRacehorse.com has purchased a 12.5% interest in GI Santa Anita Derby runner-up Authentic (Into Mischief) and will soon begin the process of selling micro shares in the horse to clients. The transaction includes buying into the horse's stallion career, which is a first for the racing partnership that specializes in selling very small shares in horses for a few hundred dollars or less.

Launched by CEO and Founder Michael Behrens in 2018, MyRacehorse has taken the traditional racing partnership and turned it into something almost anyone can afford. Rather than sell 20 or 25 shares in Authentic, MyRacehorse will sell 12,500. Behrens expects the final price for a share to be $206. For one share, the client will own .001% of the breeding and racing rights in the horse.

MyRacehorse often partners with Spendthrift Farm and was given the opportunity to purchase a part of Authentic after Spendthrift bought a majority interest in the 3-year-old earlier this month.

MyRacehorse has never sold more than 6,000 shares in a horse, but Behrens expects the offering on Authentic to sell out quickly. He cannot officially sell shares until getting approval from the SEC, which, he says, typically takes between five to 15 days. Partners can buy more than one share, but their total active investments cannot exceed 10% of a person's annual income or total assets.

MyRacehorse has bought into high-profile horses before, most notably Street Band (Istan), who won the GI 2019 Cotillion S., and Lazy Daisy (Paynter), the winner of the 2019 GII Pocahontas S. But this is their most ambitious venture yet.

“We think this is a great chance to bring in people on the periphery or maybe people who have become a little less involved in a game they used to love,” Behrens said. “What we are seeing over and over again is people get re-energized by something like this because it is such an easy way to enjoy the sport you like. We're hoping this brings in a lot of new people.”

With all prior partnerships, the horses were sold at the end of their racing careers and whatever monies were available were distributed to the owners. In the case of Authentic, Behrens is counting on even greater interest than normal because the owners will be in on his stallion career.

“We decided it would be really cool, not only for people to have the opportunity to have a Derby prospect, but also to stay in as he becomes a stallion,” he said. “We never had any desire to move into the stallion, breeding games. But with all the growth and all the people we have who are particpatory, we thought we should try this. The idea will be that you buy in for  racing and breeding equity and will own your pro rata percentage. We want to take people on the same great journey we always do. It will be fun to have a shot at the Kentucky Derby and also the chance to own a part of a great stallion. I think the ability to participate in that side of the game is going to attract a lot of people.”

Trained by Bob Baffert, Authentic won the GII San Felipe S. before finishing second as the 6-5 favorite in the Santa Anita Derby. He is considered by many to be top five threat for the Sept. 5 GI Kentucky Derby.

The MyRaceHorse perks include getting reports on the horses at least twice a week and access to the winner's circle. Behrens said that if fans are allowed in for the Kentucky Derby and Authentic runs, the stable will buy as many seats as possible and then hold a lottery in order to figure out which partners get the seats and winner's circle access.