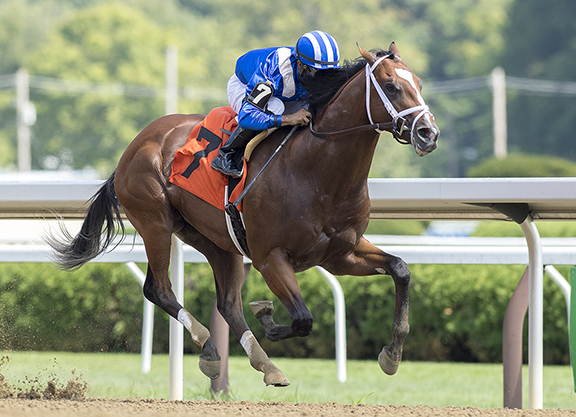 Hammered down to 85 cents on the dollar off a worktab that shouted ready, Shadwell Stable’s Mutasaabeq (Into Mischief) was not the quickest out, but was fastest late as he raced away to score by 4 1/2 lengths and the ‘TDN Rising Star’ designation.

Drawn widest in the field of seven, the $425,000 Keeneland November weanling acquisition broke near the back of the pack and was under a hustling Luis Saez ride as American Gentleman (American Pharoah) showed the way through an opening couple of furlongs in :22.21. Responding to his jockey’s busy ride, Mutasaabeq rolled up four deep on the turn, challenged wide and hit the front in upper stretch and ran up the score from there. The Wesley Ward-trained filly Guana Cay (Air Force Blue) plugged on gamely late to be second.

While Mutasaabeq legged up for the debut over the Belmont training track in June and over the Oklahoma Training Track for his first couple of breezes in July, it was over the Saratoga main track that he truly showed some spark, working a best-of-17 five furlongs from the gate in :59 2/5 July 19 and capping his tab with a half-mile from the gate that was clocked in :46 2/5 (1/50) Aug. 1

A 16th Rising Star for Into Mischief, Mutasaabeq is out of a half-sister to MGSW Cool Cowboy (Kodiak Kowboy) who was acquired with this foal in utero for $180,000 at the 2018 Keeneland January sale. The winner has a yearling half-sister by California Chrome and a foal half-brother by Uncle Mo. Downside Scenario was most recently bred to Into Mischief’s GI Xpressbet Florida Derby-winning son Audible.