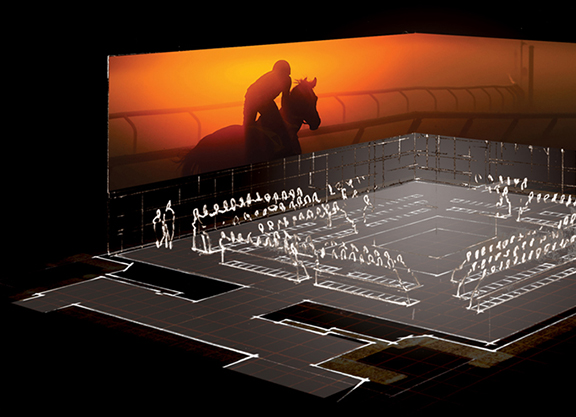 The National Museum of Racing and Hall of Fame opened in 1959, and it was showing its age. With out-of-date plaques, no interactive exhibits and new technologies, it was a 20th-century museum in a 21st-century world.

That, however, is about to change. An effort to modernize started when John Hendrickson was named the museum's president in 2017. He vowed to improve the facility and the fan experience. Some three years later, and after $12 million was poured into the project, future visitors will find a new, better and more modern racing National Museum of Racing and Hall of Fame.

“It is a project that has been a couple of years in the works and something the industry has been supportive of,” said the museum's director of communications, Brien Bouyea. “We think this is going to be a great tourist destination. Saratoga has always been a popular place to go. We think we can make this racing's version of Cooperstown, a place people have to come to, a must-visit.”

The museum was closed in late December and will not re-open until mid-July, in time for opening day at Saratoga. The most obvious change will be to the Hall of Fame itself. Unlike most other sports, racing inducts many of its human competitors before their careers are over, and the plaque put up at the time of induction remained there forever. Whatever an individual accomplished after going into the Hall of Fame went unmentioned.

“We had a very nice, traditional, hallowed space, but the plaques were outdated,” Bouyea said. “We induct trainers and jockeys when they are still going. For example, if you go to Nick Zito's plaque, it doesn't mention his most recent Belmont win. Gary Stevens's plaque doesn't have his comeback, his winning another Preakness and a number of Breeders' Cup races. Mike Smith's plaque didn't mention Zenyatta.”

Once the Hall of Fame re-opens, the plaques will be gone. They will be replaced with interactive monitors. With a touch of the screen, visitors will be able to see a complete record of the individual, learn more about them and watch races that were parts of their career.

“With these interactive screens, the Hall of Fame will come to life,” Bouyea said. “Instead of having the traditional plaques, they're going to be represented by digital interactive stations. You can punch up Secretariat and not only will his plaque come up, but you can watch the stretch run of a race like the Belmont. There will also be photo galleries. The plaques have kind of just been sitting there and, now, this will change the experience and take the visitor inside the careers of these Hall of Fame members.”

The plaques are not going to wind up in a storage shed at the museum. Bouyea said the plan is to lend them out to racetracks and racing organizations and that they could become part of a traveling exhibition.

The other major project is the development of a movie that the museum describes as a “larger-than-life cinematic experience.” Much like the film shown at the Kentucky Derby Museum, it will be presented on a 360-degree screen and will be produced by Donna Lawrence Productions, the same company that produced the Derby movie.
“This is going to be a replacement of the 'Race Day America' film that has been in there since the 1980s,” Bouyea said. “They've been on location, shooting at Saratoga, Santa Anita, Churchill Downs, and have been doing interviews with Hall of Fame members and getting the ambiance of the sport. This film is going to be a signature experience; it's going to be something that nobody has ever seen before. I don't want to let too much spill out, but if you imagine what the Kentucky Derby museum has done with a 360-degree presentation, it's going to be like that but at the same time, also different. There will be elements that nobody has seen before in a theater experience.”

The fund-raising aspect of the project has not yet concluded. To participate, or learn more about the National Museum of Racing and Hall of Fame, click here.