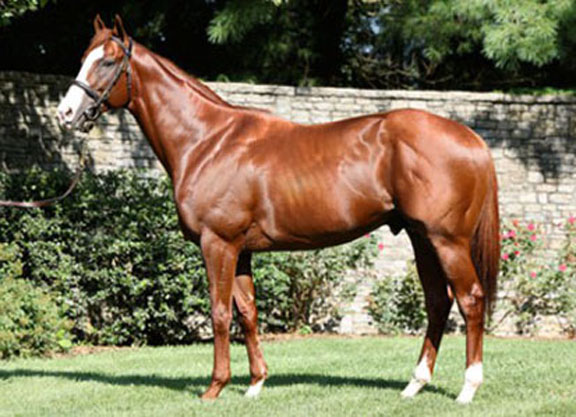 
2–Jan's Reserve, 122, c, 3, Ready's Image–Reserve Bid, by Pine
Bluff. ($65,000 Ylg '14 FTKJUL; $150,000 2yo '15 FTFMAR).
O-GRD Two Racing; B-David E. Hager, (KY); T-Michael Dilger.
$25,000.
3–Sallisaw, 116, c, 3, Exchange Rate–Smokey Diplomacy, by
Dynaformer. ($100,000 Ylg '14 KEESEP; $90,000 RNA 2yo '15
OBSMAR). O-Cheyenne Stables LLC; B-Nolan Creek Farm (KY);
T-Kiaran P. McLaughlin. $12,500.
Margins: 1, 3, HD. Odds: 1.70, 1.60, 6.00.
Also Ran: Zen Papa, Atizapan. Scratched: Purcell, Condo King.
Perseverance finally paid off for Zayat Stables' King Kranz, as the dark bay–in receipt of first-time blinkers–came away late to break his maiden in style in the inaugural running of this New Year's Day feature. Drawn widest in a scratched-down field of five sophomores, King Kranz was off alertly, but was forced to take up a stalking role when slow-starting 5-2 chance Zen Papa mustered up the fence to take up the running through an opening quarter in :23.31. The gray was allowed to bowl along, but King Kranz, the clear second choice, turned up the pressure three-sixteenths of mile from home, took command while racing on his wrong lead and held on to score by a length. Jan's Reserve, favored by a little more than $3,000, came from last to complete the exacta. A well-bet second to subsequent MGSW Mohaymen (Tapit) in a Sept. 19 Belmont maiden, King Kranz was runner-up as the favorite in that track's GII Futurity S. Oct. 17 and third in the Nov. 14 James F. Lewis S. at Laurel. He was exiting a neck defeat at the hands of Condo King (Tiz Wonderful), who was scratched from this spot in favor of Saturday's GIII Jerome S., in a Dec. 5 maiden over this main track. King Kranz was also cross-entered in that event. “It was frustrating last year [going winless in five starts] but at least he started off the New Year right,” commented Tonja Terranova, assistant to winning trainer John Terranova. “We just left it up to Cornelio [Velasquez]–he had the perfect draw, and could position himself wherever he needed to. We had worked him in blinkers, and it seemed to focus him more. Cornelio said todayhe was in the bridle the whole way.” The winner's dam, a half to SW & GISP King Congie (Badge of Silver), is responsible for a juvenile filly by Dialed In and a yearling filly by Liaison. Click for the Equibase.com chart or VIDEO, sponsored by Fasig-Tipton.