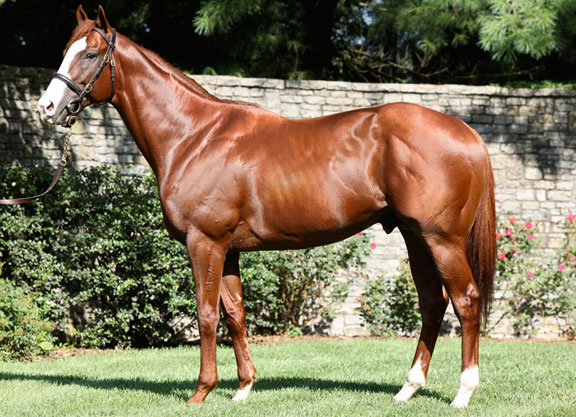 Off a modest initial stud of $12,500 back in 2011, Munnings (Speightstown) has written his own Cinderella story as he's worked his way to the top tier of the general sires list. But this year has potential to witness the sire's biggest breakthrough yet.

With a 2020 fee set at $30,000 and five stakes winners already this year, many of the horses ranking beside Munnings in terms of black-type winners are standing at five and six times his fee.

“He's a horse that really in the last two or three years has gained a lot of traction,” said Adrian Wallace of Coolmore America. “When you stack him up against sires besides him on the general sires list, he looks to have really good value.”

His most recent success has been in no small part from two fillies hot on the GI Kentucky Oaks trail. Finite and Venetian Harbor currently rank first and third on Bill Finley's TDN Kentucky Oaks Top 10 list.

“We're very proud of the people who have bred to him and proud of the owners who are enjoying the ride this year. It's an exciting time for Munnings,” said Wallace.

A homebred for Winchell Thoroughbreds, Finite broke her maiden at Kentucky Downs last September and never looked back. Undefeated in stakes company, the Asmussen trainee leads all contenders in terms of Oaks points with dual Grade II wins in the Golden Rod S. and the Rachel Alexandra S.

“This is a filly that deserves her place on the list,” Wallace said. “She's got a very high cruising speed and looks to be very hard to beat as we go farther on into the year.”

He continued, “If any filly can take it up to her, it might be Venetian Harbor.”

Trained by Richard Baltas, Venetian Harbor broke her maiden second time out by over 10 lengths at two before going on to win the GII Las Virgenes S. by nine in February.

“She was ultra impressive in her last start and I think that if she can go on, she'll be a very exciting filly to watch down the road,” Wallace said.

While Munnings himself excelled over seven furlongs, taking the GII Woody Stephens S., GII Tom Fool H., and the GII Gulfstream Park Sprint Championship S., his all-time leading earner, I'm A Chatterbox, achieved her three Grade I wins all at distances beyond a mile.

“I think that for most of Munnings's progeny, they've got his high cruising speed and they're tough, but they also have the stamina to go a mile and beyond,” Wallace noted. “With these two fillies, hopefully, we'll see them go the Oaks distance in the near future.”

“While he has Storm Cat and Mr. Prospector on the top, he's a complete outcross on the dam side, which makes him very attractive for the vast majority of American bloodlines,” Wallace said. “Finite is out of a Tapit mare, so he works well with the A.P. Indy and Pulpit lines. And Venetian Harbor is out of a Street Cry (Ire) mare, so he also works well being bred back into Mr. Prospector. He's had good success with Sadler's Wells through El Prado and Medaglia d'Oro, so I think there's great scope to breed into most American bloodlines.”

The two Oaks-bound fillies aren't the only ones succeeding for their sire this year. Munnings already has two other graded stakes-winning older horses. Warrior's Charge became a graded stakes winner last month after fighting to take the GIII Razorback H.

“What most impressed me about Warrior's Charge was his tenacity,” he said. “He was on the lead for the whole race and coming into the stretch, there was a wall of five horses behind him. You expected him to get swallowed up, but he found some inner determination to stay up by a head.”

“I think it's a testament to the horse, to get his third stakes win at six years old. These Munnings horses are durable and sound, and they've got that aspect of brilliance to them as well,” Wallace said.

“As his quality of mares has gotten better, his sales record has improved. After everything he's done so far this year, I'd imagine it would continue even more this year,” said Wallace. “He's definitely on an upward curve and it will be reflected on demand at the sales.”

While Speightstown and his sons are historically noted as dirt sires, Munnings has had recent success with offspring on the turf. Finite broke her maiden last fall on turf at Kentucky Downs, and Wesley Ward's Kimari ran second in the G2 Queen Mary S. at Ascot last year before going on to win two consecutive stakes races stateside on the grass.

“While there is definitely a certain amount of versatility to him, I think he's generally your all-American dirt sire, which is part of what makes him so popular,” said Wallace. “Another thing that helps his demand is that everyone can breed to him. He's at a price point where he's very accessible.”

“We initially set his fee this year at $25,000, but we were bowled over in terms of demand so we raised it to $30,000,” Wallace said. “We probably could have gotten away with setting it even higher, but we didn't want to be overly greedy and I think we were rewarded in that. He's pretty much booked full for this year, and demand has been like never before.”

As Finite and Venetian Harbor continue to work toward the first Friday in May, the team at Ashford Stud prepares for demand to grow even more for next year. Wallace noted the surge in demand for Uncle Mo after Nyquist's victory in the Kentucky Derby, as well as for Lookin At Lucky after Country House last year.

“Races like these can put sires in a rarified air,” said Wallace. “If Munnings were to have success in one of these iconic races, it would really make him a household name. I think he's already well on his way to becoming that, but with these two fillies, he's got a real chance this year.”