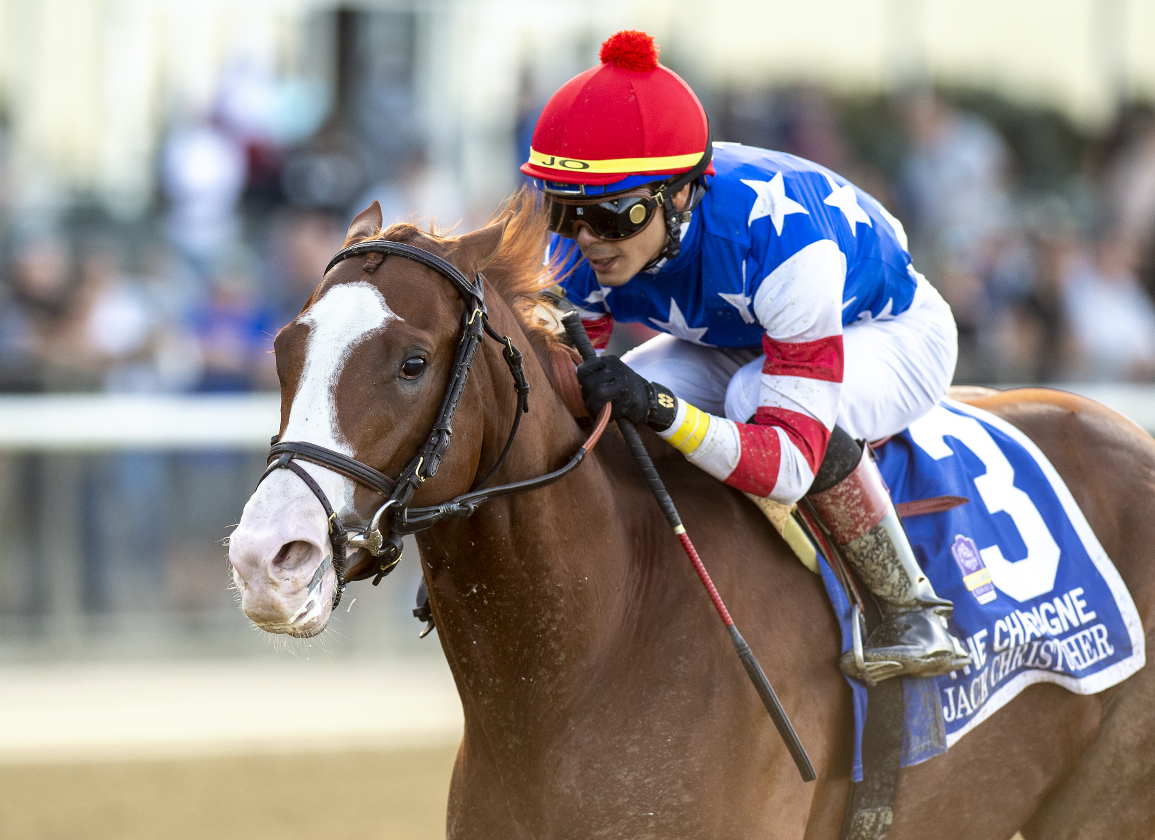 Apparently, 'Jacks' are wild where it comes to the GI Champagne S., in the last couple years, at least.

Twelve months after Jackie's Warrior (Maclean's Music) put on a show in the 'Win and You're In' qualifier for the GI TVG Breeders' Cup Juvenile, Presented by TAA, 'TDN Rising Star' Jack Christopher (Munnings) turned in a dazzling performance of his own, racing away to a 2 3/4-length success to stamp himself as one of the favorites on Breeders' Cup Friday, Nov. 5.

Accorded 'Captain Obvious' Rising Star status after covering six furlongs in 1:09.85 to thrash a field of Travers Day maidens by 8 3/4 lengths Aug. 28, the chestnut–who bears a striking resemblance to his Ashford Stud-based stallion–was sent off as the 17-10 favorite in the Champagne. It was a field short on numbers, but high on quality that included GI Hopeful S. hero Gunite (Gun Runner), GSW, Hopeful runner-up and 'Rising Star' Wit (Practical Joke) and 10-length Saratoga maiden romper and 'Rising Star' My Prankster (Into Mischief).

In the end, Jack Christopher left them all eating his dust.

Away fairly, the $135,000 Fasig-Tipton October acquisition landed in third position early, but was angled out and around longshot Kavod (Lea) in the opening quarter-mile and assured that Gunite would not get away with cheap fractions. Just off the leader's flank through a half-mile in a solid :46.49, Jack Christopher traveled ominously well on the turn as the top two pulled well clear of the trailing quartet. The chalk claimed a hard-ridden Gunite under a hold at the five-sixteenths pole, opened an unassailable advantage and was ridden out to a comfortable victory. Commandperformance (Union Rags), runner-up in a muddy Spa maiden in his lone previous appearance Sept. 6, raced at the tail of the field with the notoriously slow-starting Wit, but made good overland progress into the stretch and was gaining late. Wit did manage to close up the fence for third while no menace to the top two. The disappointment of the race was My Prankster, who was niggled at fully five furlongs from home and never landed a blow in a distant fourth.

“We knew we had speed and Jose [Ortiz] and I agreed to not take that away from him. We just wanted to break out of there and get a good spot,” said winning trainer Chad Brown, whose previous Champagne winners include Practical Joke (2016) and Complexity (2018). “He was a horse that identified himself as early on as his first work. I was on the phone with the connections saying, 'This is potentially a really good horse. I can't believe what I just saw.' He's just been brilliant in every work. There was some buzz around him before he ran, and he lived up to it.”

The last horse to complete the Champagne/Breeders' Cup Juvenile double was Uncle Mo in 2011, though Brown's lone Juvenile winner, Good Magic (Curlin), was second to Firenze Fire (Poseidon's Warrior) in the 2017 Champagne before causing an upset at Del Mar.

Jack Christopher is the 52nd stakes winner, 21st graded winner and fourth top-level winner for the very reliable and versatile Munnings, joining dual GISW I'm A Chatterbox, this year's GI Madison S. heroine Kimari and GI A. G. Vanderbilt H. victor El Deal, a Louisiana-based stallion who has already been represented by two black-type winners from his first crop to the races this year. Jack Christopher is the first graded winner of any variety out of a daughter of Half Ours (Unbridled's Song), who passed away earlier this year.

A Jan. 30 foal, Jack Christopher is out of a daughter of Blushing Ogygian, the dam of MGISW and successful dual-hemisphere stallion Street Boss (Street Cry {Ire}) and to MGSP Habiboo (Unbridled's Song), who counts GSWs Bellera (Bernardini) and Life Imitates Art (More Than Ready) among her produce. Third dam Fruhlingshochzeit was a half-sister to the likeable handicap horse Running Stag (Cozzene).

Rushin No Blushin is the dam of a yearling Mo Town filly, a $5,000 KEENOV weanling last year, was empty to Munnings this year and was most recently covered by Complexity.