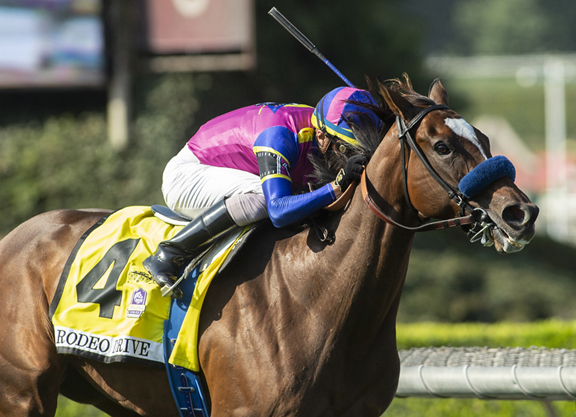 George Krikorian’s homebred Mucho Unusual went wire-to-wire to win the GI Rodeo Drive S. at Santa Anita Saturday and earn an automatic berth in the GI Breeders’ Cup F/M Turf. Tonahutu took the lead from her inside post in the early strides, but Mucho Unusual strode past her down the stretch for the first time. The bay filly loped along through pedestrian splits, scampered further clear rounding the final bend and resolutely held off Maxim Rate late, while late-closing favorite Lady Prancealot did her best to close into the slow fractions, finishing third.

“My filly ran very sharp and she was really comfortable in the race,” said winning rider Juan Hernandez, who was earning his first Grade I triumph and his second graded race of the weekend following Big Runnuer (Stormy Atlantic)’s tally in Friday’s GII Eddie D S. “They let me go to the lead easily, so I took it, and then the rest of the race the filly did by herself. She’s a really nice filly. When I asked her to run at the stretch, she responded really well.”

Winning trainer Tim Yaketeen added, “This mare is unbelievable, her mother, Not Unusual is a great producer. It was great to get a Grade I win on the page for her. It’s very gratifying. She’s been such a hard-knocking filly. She’s been knocking on the door with Grade Is, so to pull this out is amazing. She’s very easy to train and very straightforward. She makes my job easy.”

Mucho Unusual, winner of last year’s GII San Clemente S. and second in the GI American Oaks, opened 2020 with third-place efforts in the Feb. 22 GII Buena Vista S. and May 25 GI Gamely S. Shipped east, she was eighth in the July 11 GI Jenny Wiley S. at Keeneland and returned home to be third in the Aug. 15 Solana Beach S. going one mile over the Del Mar lawn last time out.

George Krikorian purchased Not Unusual for $67,000 as a yearling at the 2007 Barretts October sale. The mare, the dam of GIII Transylvania S. winner Big Score (Mr. Big), has a yearling filly by Mr. Big and a weanling colt by Kitten’s Joy. She was bred back to Uncle Mo.