Much to Love with Grade I-Winning Fasig-Tipton Offering 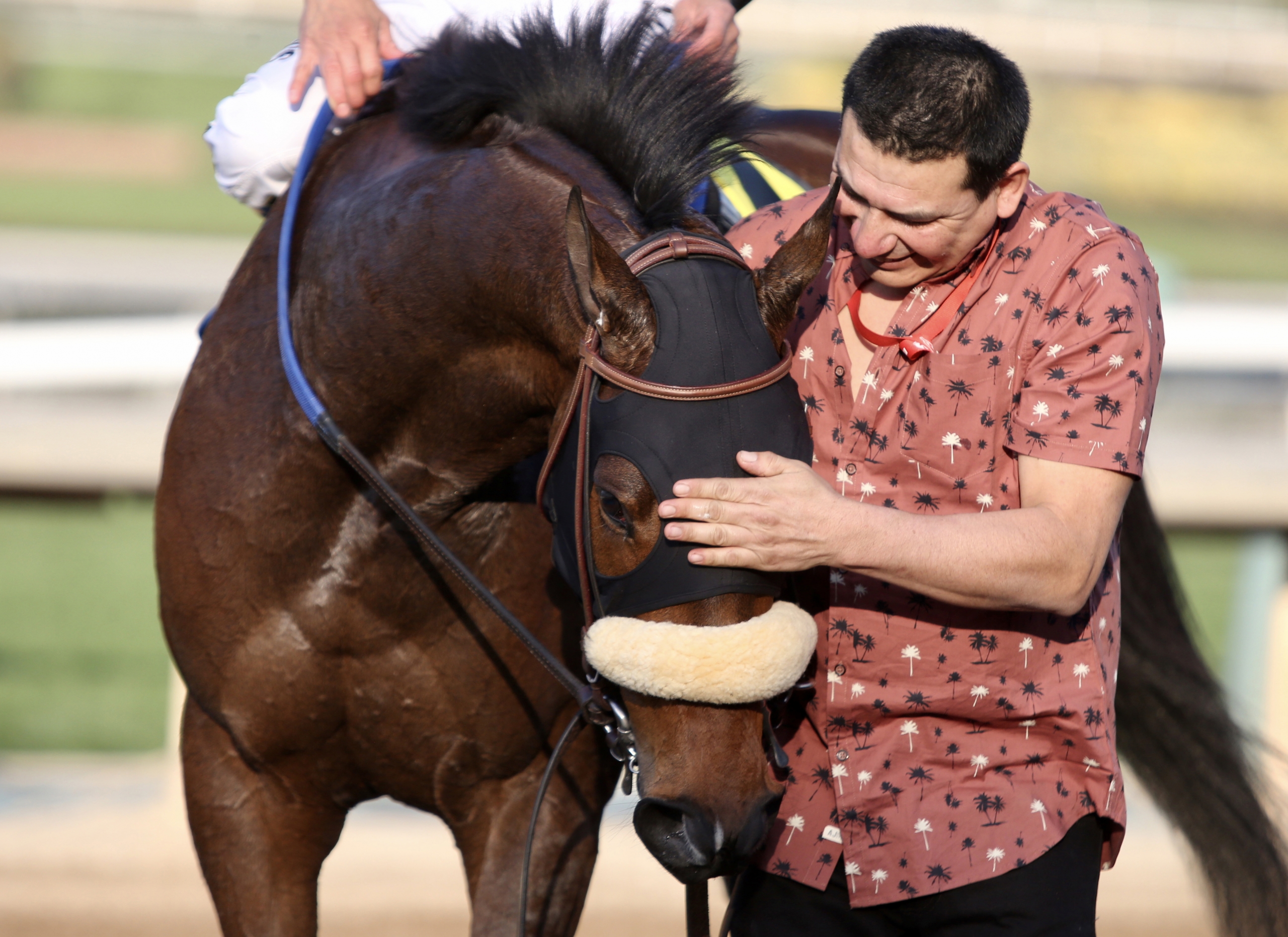 Hard Not to Love stole the hearts of racing fans across the country. She now sells at the Fasig-Tipton November Sale. | Horsephotos

Whatever Hard Not to Love (Hard Spun – Loving Vindication, by Vindication) may have lost with the absence of one eye, she gained with the loyal following that developed over her career as she won the hearts of racing fans and earned the respect of the racing community.

“She was special because she dealt with a problem that I knew she was thinking about and I knew was on her mind, but she had the class and the style and the substance to fight through the issue,” said Terry Finley, whose West Point Thoroughbreds campaigned the filly along with Mercedes Stables, Scott Dilworth, David and Dorothy Ingordo and Steve Mooney. “She was very special to all the racing fans and all the people in the business out on the West Coast and especially to John Shirreffs and his barn. There was a lot of goodness around her career and I think she really drove home the things that cause us all to love this great business.”

After a three-year campaign marked by wins in the GI La Brea S. and GII Santa Monica S. and placings in four additional graded stakes races at Santa Anita, Hard Not to Love will be offered this week at the Fasig-Tipton November Sale.

“She's sure appropriately-named,” said Fasig-Tipton's Boyd Browning. “Everybody cheered for her and you wanted to see her get to the winner's circle. To watch her grow and develop and to see her accomplishments on the racetrack was pretty remarkable and I would say that her offspring are going to be hard not to love also. She combines all the elements of what you look for in a brilliant broodmare prospect and she provides a world of opportunities.”

Bred by Anderson Farms, Hard Not to Love was picked out by David Ingordo at the 2017 Keeneland September Sale.

“She came out and was just a queen-looking physical,” Ingordo recalled of the moment he first saw the daughter of Hard Spun. “She was very correct in front and was a very strong filly behind.”

On the day of her $400,000 purchase, the filly's pedigree listed just one stakes-winning half-brother as offspring of her Saratoga allowance-winning dam Loving Vindication (Vindication). But later that afternoon, the yearling's 2-year-old half-sister placed in a Grade I. The filly, named Wonder Gadot (Medaglia d'Oro), would become a multiple graded stakes winner and 2018 Horse of the Year in Canada.

“Since then, there have been other different family members that have popped up, so the family just became explosive and all at Grade I levels,” Ingordo said. 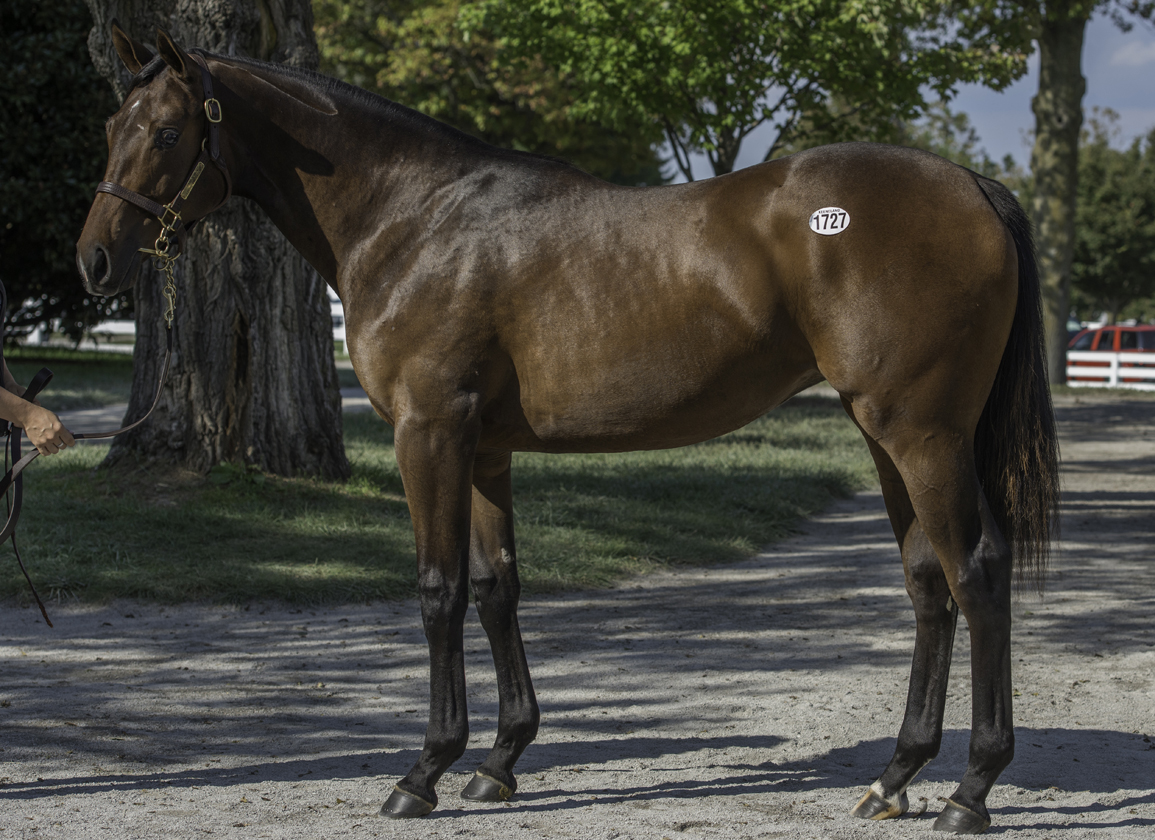 Hard Not to Love as a yearling at the Keeneland September Sale. | Louise Reinagel

Hard Not to Love was sent to McKathan Brothers Training in Ocala and had just turned two when Ingordo received a call about a paddock accident. The filly's eye had to be removed surgically.

“She was broken into training, from saddling to breezing, without ever having the benefit of that eye,” Ingordo said.”But we had a group of six fillies in the partnership and she was the star from day one.”

“You get really excited when [you have a horse with] John Shirreffs and you can start to hear it in his voice,” Finley said. “He said, 'It will probably take me a little while to get this filly to the races, but she's a good one.' So everybody was really excited and John was right on with this filly; she was a runner from the start.”

Early in her 3-year-old season, Hard Not to Love debuted with a front-running, three-length win at Santa Anita to earn the 'TDN Rising Star' nod.

After two more trips to the winner's circle over allowance company, she stepped up to Grade I company in the GI La Brea S. Up against a quality field that included MGSW Bellafina (Quality Road) and GIISW Bell's the One (Majesticperfection), Hard Not to Love rallied from the back of the field to win be over two lengths and earn a 102 Beyer Speed Figure.

“It was a good group of fillies, but I thought from the feel I got around the barn that she was sitting on a big effort,” Finley recalled. “I knew going into the far turn that they were going to have a difficult time trying to contain her. She ran by a couple of fillies that turned out to be exceptional and she did it with style and grace and with a flourish. I think that's been her calling card is the ability to finish with a flourish.”

The accomplished bay kicked off her 4-year-old campaign with a 3 1/2-length winning performance in the GII Santa Monica S. and then ran second in her next two starts against top company in the GI Beholder Mile S. and the GII Santa Maria S.

“Hard Not to Love was certainly at the top of her game posting those back-to-back graded stakes wins,” Browning said. “They were quality races against quality competition. She was also very, very consistent. An eight-time graded stakes performer, very versatile in terms of the distances she ran and was a fun filly to watch because sometimes she would be on the lead and other times she would close.” 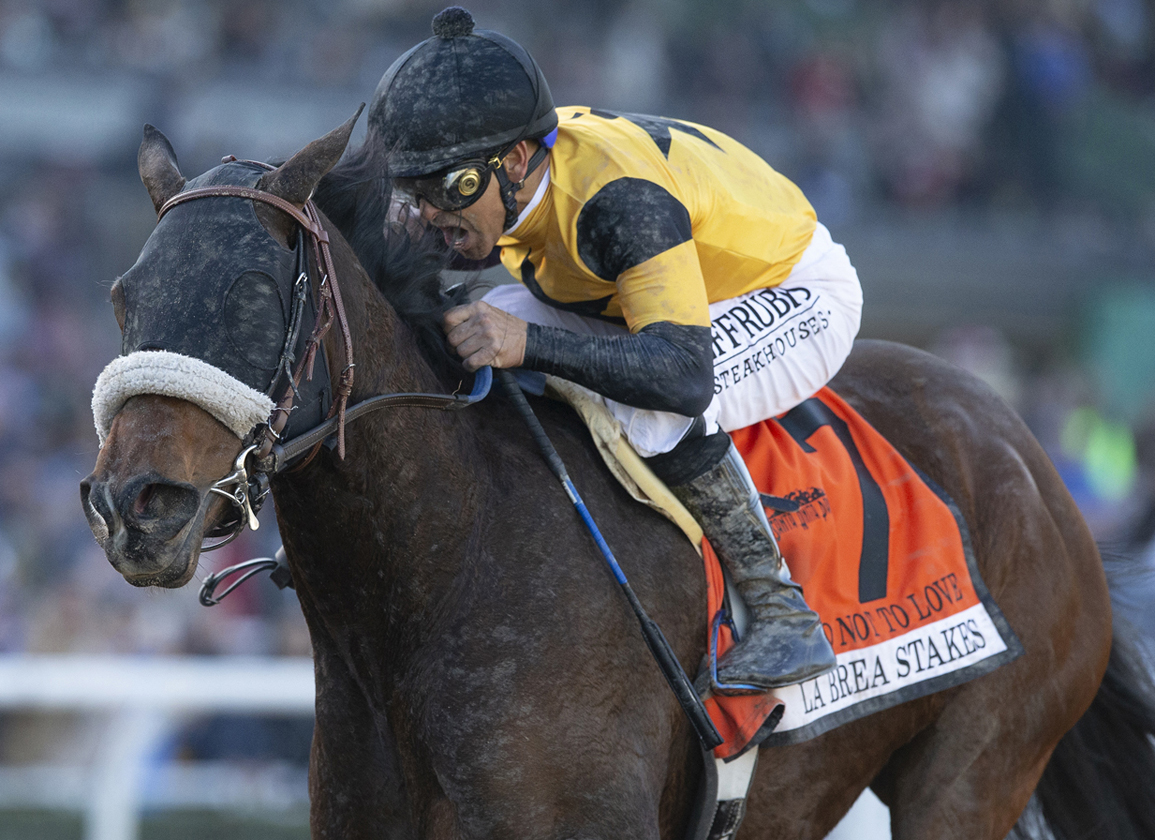 After placing in two more graded stakes in California, Hard Not to Love was retired this year with five wins in 12 career starts, placing in all but two.

“Hard Not to Love's hallmark for me, and it's something I look for in any horse, is when they're consistently competing at a high level,” Ingordo said. “She showed up every race, competed against the best of her generation and left it all on the track each time.”

Ingordo said he strongly believes that if it were not for the dedication of John Shirreffs, the talented filly never would have had the chance to show off her ability.

“There's no doubt in my mind that if Hard Not to Love was in a mega-trainer's barn, they would have sent her home,” he said. “She was a talented filly and she had a great mind, but you had to teach her and work through some things. John's process was well thought out and was for the filly's best interest. Having Hard Not to Love with John Shirreffs is like being in private school versus public school, and we got a valedictorian.”

The 5-year-old will begin her new career as a broodmare after selling as Hip 184 on the 'Night of the Stars.'

“Hard Not to Love will be a successful broodmare because she had style, class and elegance and she was able to put all those together and perform on the racetrack,” Finley said. “She always had that sparkle in her eye and I think people that know the business can see those special ones.”

Along with the success of her half-sister Wonder Gadot, who sold for $2 million at the 2019 Fasig-Tipton November Sale, Hard Not to Love's pedigree received another Grade I  boost since her yearling purchase with the success of GI Beholder Mile S. victress Secret Spice (Discreet Cat).

“She has a fantastic depth of pedigree,” Browning explained. “She also offers a lot of breeding opportunities being by Hard Spun and out of a Vindication mare. From a sire-line perspective, she can be bred to a lot of different stallions that stand all over the world. She combines race record, pedigree and physical looks and presents a fabulous scenario for someone looking to have the opportunity to fulfill their dreams come November the 9th.”

For Ingordo, Hard Not to Love offers everything that he seeks out in a broodmare prospect.

“They have to have some speed and Hard Not to Love is a very fast horse,” he said. “They have to have a good physical presence and I feel like Hard Not to Love is one of the better-looking horses that will walk through any sales ring this year, next year or two years from now. Then when you take into account her race record and pedigree, those are all the things that you need to have a blue hen, foundation-type mare.”