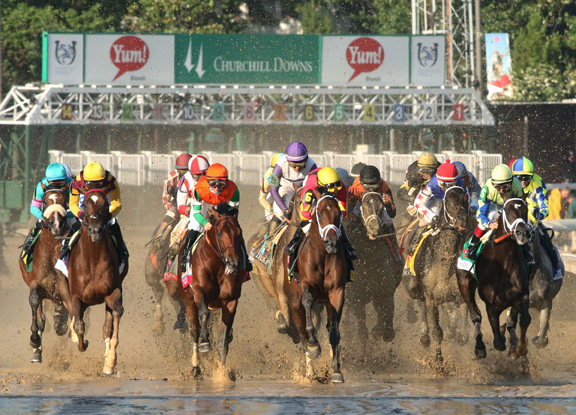 Projected autumn purse levels for maiden special weight races on the Kentucky circuit were revealed during a video meeting of the Kentucky Thoroughbred Development Fund (KTDF) advisory committee on Tuesday.

Churchill had closed out its spring/summer season at the $79,000 level for MSW races.

The MSW races for the 17-day Keeneland Race Course meet will be $70,000, the same level as the July mini-meet.

Bob Elliston, Keeneland's vice president of racing, said that his track will “basically give away the same amount of money this fall as we did last fall” in terms of overall purses.

“As we sit today, there will be limited participation of owners or fans on-track, so at this hour we are not projecting significant daily earnings from on-track wagers. We hope that changes,” Elliston added.

Both tracks had their requests approved unanimously for KTDF funding, which means a recommendation from the advisory committee to release that money will be forwarded to the full Kentucky Horse Racing Commission board for final voting at its next meeting.

Kentucky Downs MSW purse levels were not discussed on Tuesday because the track had already requested funding for its September season back in June. At that time, a track official said the MSW level projected to be $90,000.

Because of the COVID-19 pandemic that shut down racing, the KTDF was not able to generate revenue via (HHR) gaming and on-track wagering between March and June. It has since been able to recoup some funding with the limited reopening of HHR.

“To give you a sense of how fragile this is…had the governor not taken the act that he did to permit historical racing to comeback online, for us it may be $200,000 to $300,000 a month in KTDF funds that wouldn't be earned. So God forbid if we have a continuation of a problem or an escalation of a problem where we had to rescind the activity. It could really encroach upon the numbers that we had,” Elliston said.

Bill Landes III, the chairman of the fund's advisory committee, who represents the Kentucky Thoroughbred Owners and Breeders Association (KTOB), echoed that sentiment. “Our situation, as everybody knows, is in flux,” he said.