Mshawish to Taylor Made in 2017 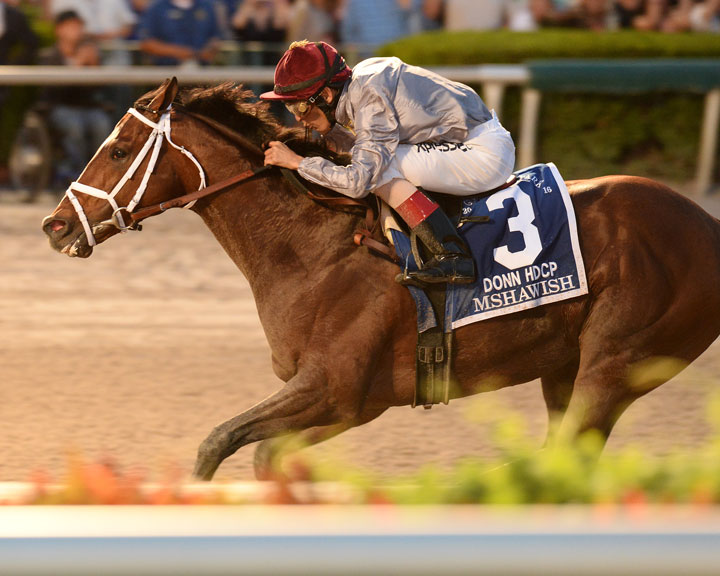 Al Shaqab Racing's Mshawish (Medaglia d'Oro–Thunder Bayou, by Thunder Gulch), winner of the Feb. 6 GI Donn H. on dirt and 2015 GI Gulfstream Park Turf H. on grass, will stand at Taylor Made Stallions in Nicholasville, Ky, upon the conclusion of his 6-year-old season. Trained by Todd Pletcher, Mshawish lines up next in the $10-million G1 Dubai World Cup Mar. 26.

“We are thrilled to have the opportunity to stand such an exciting horse as Mshawish, and thankful to the entire Al Shaqab Racing team,” said Ben Taylor, vice president of Taylor Made Stallions. “It's exciting because Mshawish has always been an elite horse that's performed well all over the world, but he's really shown a different dimension on the dirt. He ran a 2 3/4 on the [Ragozin] Sheets in the [GIII] Hals Hope [Jan. 9], and his win in the GI Donn H. established him as one of the best dirt horses in the world. Physically and genetically, Mshawish is really going to appeal to breeders. He's a good-looking horse, extremely sound, and will be the most accomplished son of leading sire Medaglia d'Oro to retire in America. The sky is the limit for him the rest of this racing season, and beyond in the breeding shed.”

Pletcher added, “Mshawish has always impressed me with his versatility, high cruising speed, and neat ability to also have an exciting turn of foot.”

Mshawish will continue to be owned and campaigned by Al Shaqab and Pletcher throughout 2016, with his year-end goal being the $5-million GI Breeders' Cup Classic at Santa Anita. The deal calls for a 50% syndication of Mshawish upon retirement, with Al Shaqab retaining the other 50% of the horse.

“All of us at Al Shaqab are delighted that Mshawish will be retired at the end of the season to stand at Taylor Made Farm,” added Khalifa al Attiya, general manager of Al Shaqab Racing. “He joins Khozan as our second horse to retire to stud duties in the U.S. It is so important to us that we not only race good horses, but that we also produce stallions. Therefore, we are very proud that, in a relatively short period of time, we now have six exciting young sires on our roster around the world, with the hope of many more to come.”