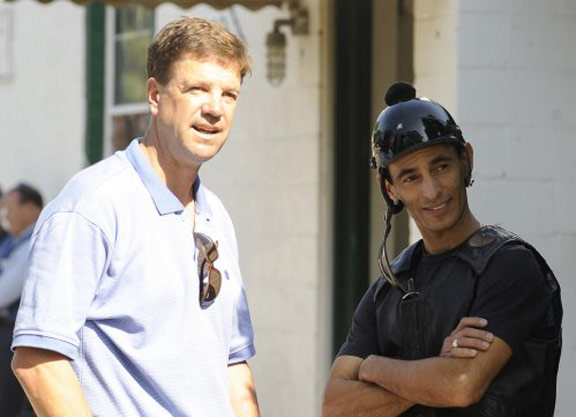 Editor’s Note: Trainer H. Graham Motion has penned the following response to a KHRC ruling Tuesday fining him for a Robaxin positive with last year’s GIII Bewitch S. winner Kitten’s Point (Kitten’s Joy). Click here to read a TDN article on his initial appeal to the suspension and fine.

After over 11,000 starters and more than 2,000 winners over the course of more than 20 years, [Tuesday] I was fined by the Kentucky Horse Racing Commission for the first positive in my career and Kitten’s Point was disqualified from her win in the 2015 GIII Bewitch S. at Keeneland. This hearing took place in a meeting where I was denied the opportunity to address the commission. Of course I wanted to defend myself, but moreover I wanted to address some of my concerns with this medication and how it was handled. The entire process has been extremely disappointing and troubling to me.

I always felt that if the day ever came where, by some unforeseen circumstance, I was charged with a drug violation I would not lawyer up to defend myself, but rather would take my punishment and move on. It would upset me to see trainers go to such great lengths to defend themselves. But, when I found myself in that position I felt differently. I felt that my staff and I had gone to extraordinary lengths to protect myself and my clients. When I was made aware of a withdrawal time I would add plenty of cushion as was the case with Kittens Point. The last time she was treated with Robaxin was seven days before the race, more than double a recommended withdrawal guideline published by the KHRC. After all, if we as trainers can not rely on the guidelines that are given to us, how on earth can we be expected to operate within the rules?

More over, I was troubled to learn that the current threshold for Robaxin as set by the RMTC and adopted by the KHRC was not supported by good science, including going completely against the recommendation set by the head of the KHRC’s testing lab Dr. Sams. Unfortunately in my case I was not allowed to defend myself based on the science, including a recently approved paper published by Heather Knych which clearly states that the RMTC guidelines for Robaxin are misguided. In my opinion this is information that should be turned over to horseman as quickly as possible. Surely the KHRC are not looking to trip up horseman with unsupported thresholds and guidelines? In a time of ever changing restrictions on certain medications it should be imperative that horsemen are kept informed.

Equally as important to me is the way in which our samples are handled. I strongly believe that it is a good thing that post race testing has become increasingly more sensitive, but shouldn’t there be a responsibility with the commission that our samples are handled with the utmost of care. We are now being tested for nanograms, that is a billionth of a gram. It is disturbing to me that the samples are frequently collected and handled in unsecure environments, very little has changed with regard to this process over the years considering the technology and sensitivity of the testing process.

So there, I have said it.

All I was asking for was two minutes, it didn’t seem like an unreasonable demand. By all means we need to keep our game honest, but at what cost to the guys that are trying to play by the rules.