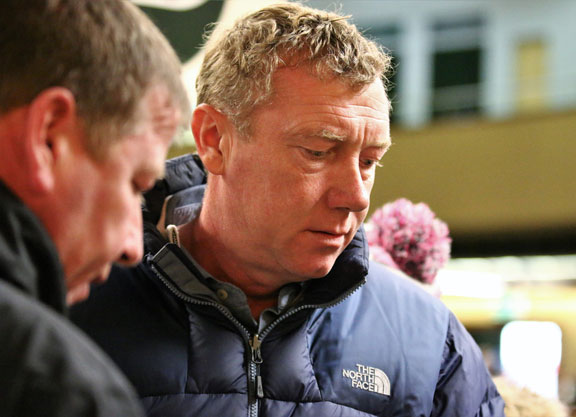 The Morrin family's Pier House Stud has been doing business at Goffs for decades and the Curragh-based farm's current custodian Brendan Morrin is continuing the family tradition by sending a strong draft of seven yearlings, a mixture of homebreds and pinhooks, to the Goffs Orby Sale on Sept. 30 and Oct. 1. Buyers can be spurred on by the fact the farm is a proven producer of quality, high-class racehorses such as Group 1 winner Capla Temptress (Ire) (Lope De Vega {Ire}) and multiple stakes winner Shamwari Lodge (Ire) (Hawk Wing).

The first of the Pier House draft that will enter the ring at Doncaster will be lot 58, a colt by Le Havre (Ire) who is a full-brother to a stakes winner in Havre De Paix (Fr), who was a 230,000gns broodmare purchase two years ago by Deerpark Stud. The colt was purchased by Pier House for €72,000 at Goffs last year and Morrin said, “He is a lovely big, scopey horse with great action. There are only a handful by the sire in the sale so hopefully he might stand out a bit. His full-sister is a stakes winner so the mare is a proven producer and this is a very good individual.”

Morrin's draft lacks nothing in sire power and next up is lot 71, a homebred daughter of No Nay Never from the family of champion 2-year-old filly Damson (Ire) (Entrepreneur {GB}). The catalogue states the dam Castle Cross (Ire) (Cape Cross {Ire}) has yet to breed a winner but that omission was rectified very recently when her Zoffany (Ire) 2-year-old Minsky (Ire) landed a novice event at Yarmouth in impressive fashion.

“She is a nice filly and the half-brother winning was a good boost to get just before the sales,” Morrin said. “He looks like he could go on to better things too so that augurs well for the filly, who is a good type and moves well.”

Morrin was even more effusive in his praise of lot 165, a filly by first-crop stallion Ribchester (Ire) from a family replete with black-type performers. The dam, Galley (GB) (Zamindar), has already bred two stakes winners in Portage (Ire) (Teofilo {Ire}) and Cape Magic (Ire) (Cape Cross {Ire}) and the €100,000 Goffs pinhook hails from a family that has already been kind to the Morrin.

“We sold her half-brother by Sea The Stars (Ire) last year to Richard Hannon and did well out of him so we decided to go back to the same source,” Morrin said. “The colt last year was a big horse and while he hasn't been out yet the reports are good. We sold a Ribchester at Goffs UK and we like what we've seen of them so far; they have lovely temperaments. This is a proper filly with a great big stride to her and we really like her.”

Day two of the Orby sees Pier House kick off with a Gleneagles (Ire) colt (lot 265). The sire has been represented by some smart looking 2-year-olds this year including Star Seeking (Ire), who earned 'TDN Rising Star' status earlier this month. Bought for 62,000gns as a foal at Tattersalls last year the chestnut is out of dual winner Magic Art (Ire) (Nayef) from the extended family of Group 1 winners Kirklees (Ire) (Jade Robbery) and Mastery (GB) (Sulamani {Ire}). “This is a big horse so he may not be a typical 2-year-old type,” Morrin said. “That said, he doesn't lunge like a backward horse. He moves lovely and whatever he does as a juvenile he should make up into a lovely 3-year-old.”

Fans of Starspangledbanner (Aus) will be keen to hear that Morrin's lot 365, a son of the Coolmore stallion, is built very much in the mould of his father.

“This is a very strong colt, a real bull of a horse, just like his sire,” Morrin said. “He wasn't over big when we bought him but he has grown into a fine horse and we are very pleased with him.”

Pier House offers a filly from the first crop of Irish National Stud stallion National Defense (GB) (Invincible Spirit {Ire}) as lot 437, and Morrin said he could not be happier with how the homebred out of Thames Pageant (GB) (Dansili {GB}) has developed.

“She's probably one of the best-looking yearlings on the farm,” he said. “The National Stud actually took a video of her to use to promote the stallion and she's an absolute queen to look at. We think Invincible Spirit is a very interesting sire of sires; you just have to look at how the likes of Kingman (GB) and Cable Bay (Ire) are doing and the Profitable (Ire) yearlings look nice too, so we thought National Defense was worth supporting. This filly looks fast and there has been very little prepping on her; she just looks a natural racehorse.”

With a Kodiac (GB) filly withdrawn, the Pier House draft is completed by lot 440, a homebred filly by Caravaggio out of a half-sister to G1 Al Quoz sprint winner The Right Man (GB) (Lope De Vega {Ire}). “She wouldn't be quite as big as the previous filly but she is a nice type, a good mover with a lovely temperament; she should be an early 2-year-old,” Morrin said. “We have a few by Caravaggio to sell this year and they're nice horses. They look fast and my late father used to say you can never have enough speed in a family and that is something we strive for when breeding.”

Pier House Stud is very much a family affair, something that is quite evident at the foal sales when there could be three or four members of the Morrin clan following one into the ring.

“I live on the home farm here which is 120 acres and my brother Ger, who used to manage Swordlestown Stud for the late Cathal Ryan, has his own farm near Ballymore Eustace,” Morrin explained. “He keeps all the mares and foals and the foals then come over to me when they're weaned. I have another brother, John, who helps out here and invests in the business while my other brother, Tom, is a vet and he does all our work. He also does the veterinary work for Ballyhane Stud.

“It's a big enough enterprise and everyone does their bit, but we all get on well together and it runs quite smoothly. My partner Carol is also a huge help and ensures everything runs smoothly when I'm away at sales.”