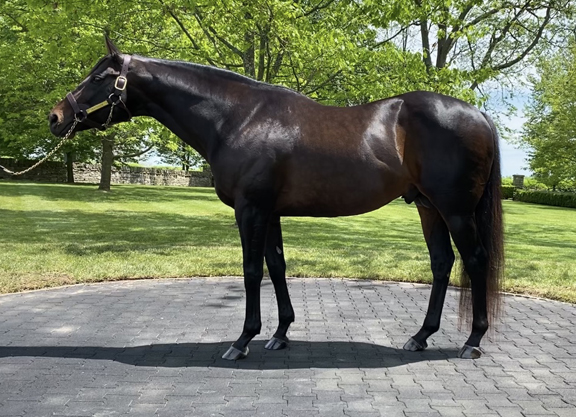 Protonico became the first second-crop sire to produce a Grade I winner this year after Medina Spirit's victory in the GI Kentucky Derby.

For all the round-the-clock pedigree scrutiny and conformation analysis that goes into finding a stallion that will produce a winner on the first Saturday in May, it took a horse standing for $5,000 and lacking that coveted Grade I win on their race record to get the job done.

Of the 26 fifth-year stallions standing in Kentucky today, Protonico was one of five to breed less than 20 mares last year. And yet, here he is now sitting atop the Leading Second-Crop Sires list after his son Medina Spirit charged home to win the 2021 GI Kentucky Derby at 12-1 odds.

When Protonico began his career at Taylor Made Farm in 2017, he bred just 34 mares. After moving over to Darby Dan Farm the next year, he couldn't do much better there with a 51-strong book. Eventually, he found a home at the Ryan family's Castleton Lyons Farm outside of Lexington and not long after, produced a Kentucky Derby winner from his first crop of 3-year-olds.

“It's kind of a fairytale story,” Castleton Lyons equine manager Pat Hayes said. “It just goes to prove that a good racehorse can come from anywhere- at any level and any price point in the stallion ranks. It gives a lot of assurance to breeders that good stallions might not be priced expensively, but they are out there. So you just have to dig a little deeper, I guess, and hope you land on one.”

While most of the commercial market may have initially turned its nose at the near million-dollar earner, Protonico's owner and breeder Oussama Aboughazale never wavered in his belief in the horse.

“The first time I met Mr. Aboughazale was in the spring of 2019,” Hayes recalled. “He put his arm around me and said, 'Pat, this horse will breed a champion.' So for all this to happen with his first crop is truly a testament of Mr. Aboughazale's belief in him. He told us he was going to support him with 10 to 20 mares every year and he has lived up to that and bred some really nice mares to him.”

Perhaps Aboughazale developed such a passionate faith in Protonico when he had a bird's-eye view of the son of Alpha Spirit (A.P. Indy) during his early days on the track. Aboughazale trained Protonico in his first two career starts, taking the colt to a 12 3/4-length debut victory before he was transferred to Todd Pletcher's barn for his 3-year-old campaign. 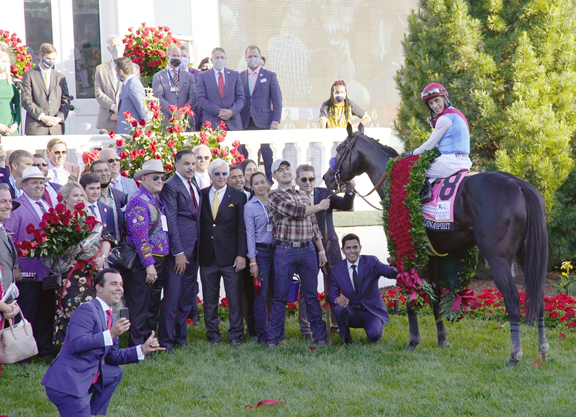 Medina Spirit's win in the 2021 Kentucky Derby gave his sire the first Grade I victory of any second-crop sire this year. | Horsephotos

As a sophomore, Protonico reeled off victories in the GIII Smarty Jones S. and GIII Discovery S. but came just short of a Grade I win in the Clark H., where he bested third-place finisher Constitution (Tapit), but came up just half a length short of Hoppertunity (Any Given Saturday). He came back at four to take the GIII Ben Ali S. and GII Alysheba S. for Aboughazale's Sumaya U.S. Stable.

“The stallion game is so competitive here,” Hayes said. “He was just a tick off in the Clark H. to win a Grade I, and I think that really hurts a stallion coming to retire in Kentucky. But his pedigree was there. There were a couple of other Giant's Causeways retiring at the same time as him, but looking at his race record, we thought he was just as good as a lot of them.”

So the team at Castleton Lyons was rewarded last weekend, when their belief in the previously-disesteemed stallion was fulfilled by Medina Spirit's victory and the calls starting coming in with breeder's begging for a slot with Protonico in the last few weeks of breeding season.

“Going into the Derby, I think everybody at the farm was a little nervous,” Hayes admitted. “We thought it was possible, but watching the race and seeing him go wire-to-wire was awesome. Since then, the phones have been ringing quite a lot. It's been pretty hectic, but we've gotten a lot of contracts to Protonico since, which is what every stallion owner wants to hear.”

What was the first thing Hayes heard from Aboughazale after the big day at Churchill Downs?

“I spoke with him yesterday and his comments were, 'I told you so,'” Hayes relayed with a laugh.

Hayes added that it should come as no surprise that a grandson of the 'Iron Horse' would display such grit.

“Medina Spirit has that heart and courage that Protonico had as a racehorse. When they were all bearing down on him in the [Kentucky Derby] stretch, he just kept fighting and fighting. Bob Baffert has touched on this a lot this week, that the horse never gives up and doesn't know how to say stop. It's great for a stallion to pass that along and Medina Spirit really embodies a lot of what Protonico was as a racehorse. They have quite a similar way of running with a low head carriage and they're very economical movers.”

Karl Keegan, who founded Lucan Bloodstock last year, was the eye behind the famed recommendation Aboughazale gave to Amr Zedan that resulted in Medina Spirit's $35,000 purchase for Zedan Racing Stables at the 2020 OBS July Sale.

“I was stabled at barn 15 and this horse kept catching my eye at barn 16, so I went to take a closer look and I was blown away.”

At the time, Keegan was working with several Sumaya Stables-owned horses, so he called their team to pass on the tip.

“That night I went home and watched his breeze a bunch of times and was amazed he had stopped the clock in :33 flat,” Keegan said. “We had a conference call the next day with the Sumaya team and they were happy about my positive review of the son of their stallion, so that gave Mr. Aboughazale the confidence to pass on the information to his good friend Amr Zedan and as they say, the rest is history.”

Protonico has had only 10 starters from his first two crops of runners, but three are already winners. Keegan, who breaks 2-year-olds for Aboughzale in Ocala, believes there are many more to come. 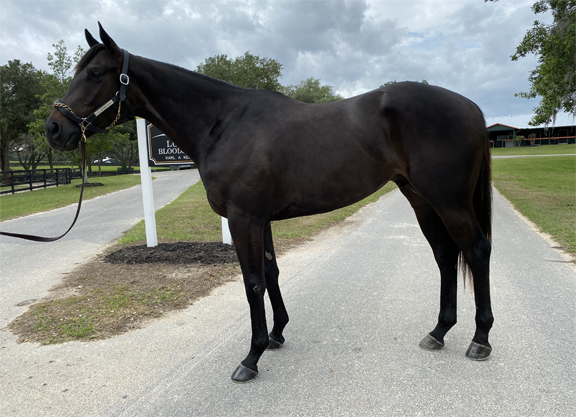 “We had five Protonico 2-year-olds this winter at Lucan,” he said. “They were all good-sized horses with strong bone and exceptional depth of girth. From day one in the round pen to breezing on the racetrack, they went out every morning and did their job.”

Hayes added of the youngsters on the ground at Castleton Lyons, “One thing we're really seeing with them is the athleticism and the walk. They've all got great bodies and are generally correct. Physically, Protonico is a really nicely-balanced horse. He's a great mover and has a really strong body. He has a lot of Giant's Causeway's traits, but even more so of A.P. Indy from the damside.”

One young son of Protonico that stands out to both Keegan and Hayes is a 2-year-old named Protonic Power. The colt is a three-quarters sibling to Princess Noor (Not This Time), the speedy filly purchased for $1.35 million last year who went on to take the GI Del Mar Debutante S. and GII Chandelier S. for Zedan Racing Stables.

“He's owned by Samaya Stables and he looks great,” Hayes said. “We're looking forward to seeing him at the races this year.”

Keegan reported that Protonic Power has wrapped up his early training and is shipping to Todd Pletcher on Saturday.

“He's a very good-looking, powerful horse with good balance,” Keegan said of the juvenile. “He's training super. He reminds me a lot of Medina Spirit, just a tad smaller. I had seen him at Castleton Lyons when I was up in Kentucky for the [2020] Keeneland September Sale and I was very excited at the chance to break and train him. When he got to our farm I went back and looked at some photos and  video I had taken of Medina Spirit at the OBS Sale and saw a lot of similarities.”

While the team behind Protonico eagerly anticipates more chapters to come in their stallion's Cinderella story, they aren't quite finished celebrating an unforgettable weekend as the stack of contracts on Hayes's desk continues to grow.

“This is a huge thing for Castleton Lyons,” Hayes said. “It's been a thoroughbred farm since the late 1700s and has had a lot of highs and lows over the years. Since the Ryan family took it over, they've typically had stallions in the barn since 2004 and we've had Malibu Moon, Bernstein, and Gio Ponti, who was a great homebred and is still standing here. To have a new stallion with some buzz around him right now is great for the farm and the staff and more importantly, great for the owners.”