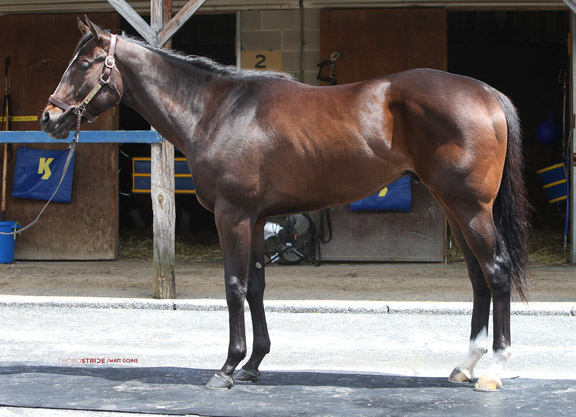 TIMONIUM, MD – The under-tack show ahead of next week's Fasig-Tipton Midlantic 2-Year-Olds in Training Sale kicked off under sunny skies and unseasonably cool temperatures in the mid-50s at the Maryland State Fairgrounds Tuesday. A colt by More Than Ready turned in the day's fastest quarter-mile work, while a colt by Malibu Moon and a filly by Empire Maker shared the fastest furlong time.

Kip Elser's Kirkwood Stables sent out hip 166, a son of More Than Ready out of graded winner Separate Forest (Forestry) to work the quarter-mile bullet of :21 2/5 during the fifth of seven sets Tuesday. Elser purchased the colt for $75,000 as part of his Gulfstream Gallop pinhooking partnership at last year's Fasig-Tipton October. After galloping at the Fasig-Tipton Gulfstream under-tack show, the dark bay colt RNA'd for $115,000.

“He galloped well and I was surprised he didn't get more attention at Gulfstream,” Elser said. “We took him home, gave him three weeks in the paddock and galloped him and breezed him a couple of times. And that's all he did.”

Elser said of the colt, “He's like a lot of More Than Readys, he's not real big. But I have loved More Than Ready since the day I bet on him the day he broke his maiden at Keeneland for Todd [Pletcher]. And he's been good to me ever since. He's a remarkable sire–200+ stakes winners all over the world. He's been good for everybody that's ever been near him.”

Three years ago, Elser had success in the Midlantic sales ring with another colt who had RNA'd at a previous juvenile sale that spring. By Mucho Macho Man, the colt RNA'd for $55,000 at OBS March before working the quarter-mile bullet in :21 1/5 and selling for $625,000 to Michael Lund Petersen. Named Mucho Gusto, the handsome chestnut went on to win the 2020 GI Pegasus World Cup Invitational.

“They liked him better here,” Elser said of that 2018 result.

Asked if he thought the buyers might also like this colt by More Than Ready more in Timonium, Elser chuckled and said, “I'd imagine.”

The first 195 catalogued juveniles worked over seven sets, beginning at 8 a.m. and continuing until shortly before 3 p.m. Tuesday.

“This is always as a good a track as there is anywhere,” Elser said of conditions at the Timonium oval. “These guys are consistent. They do a great job. They care about it. One of the things that really helps–it makes for a slightly longer day–but  cutting it off at 22 in every set so every horse gets a fresh racetrack. I'm a big fan of this racetrack and the crew that takes care of it and I always have been. Not just this year, but every year.”

During the day's first set, a colt by Malibu Moon (hip 164) worked the furlong in what would be the day's co-bullet :10 flat. Out of Seeking Atlantis (Seeking the Gold), the bay is a half-brother to Seeking Her Glory (Giant's Causeway). His second dam is multiple graded stakes winner Atlantic Ocean (Stormy Atlantic).

Bred by Castleton Lyons and Kilboy Estate, the juvenile RNA'd for $135,000 at the 2020 Keeneland January sale. He is consigned to the Midlantic sale by Eddie Woods.

“I was delighted with the work,” Woods said. “He's a big, stretchy horse. So for him to be able to do that around here is pretty good. He wasn't on his right lead, unfortunately, but the video still looks good. He just tries so hard. And he's coming off a mile track. So they have trouble adjusting to a little track like this and the leads some of the time.”

Woods continued, “I haven't had him that long. He came up from Bill Harrigan. Bill owns him in his partnership. They did a great job, as usual, getting him ready.”

Last year's Midlantic sale was pushed back to the end of June due to the pandemic and Woods did not offer a consignment at the 2020 auction. The Irishman admitted he was happy to be back in Timonium this year.

“All of the sales are important, just to keep our industry rotating, rolling along, and this is part of the rotation,” Woods said. “And this is a good sale because there are buyers who come here that don't go anywhere else. It's always been a good place to sell a nice horse, but then anywhere is a good place to sell a nice horse. They always find them. You look around, most of the top-end people, they attend all the sales. It's the other guys that kind of clean up, the locals come in and buy here. There are a lot of racetracks within a short commute of here, so hopefully they need product.”

Working during Tuesday's fourth set, a filly by Empire Maker (hip 109) shared the bullet furlong time of :10 flat. The bay is out of Pontiana (Deputy Minister)–a daughter of Grade I winner Shine Again (Wild Again)–and she is a half-sister to stakes-placed Addibel Lightning (Colonel John).

The juvenile was consigned by Kevin McKathan's McKathan Bros. Sales and was purchased for $125,000 at last year's Fasig-Tipton October sale.

The seventh and final session of Tuesday's under-tack show was delayed when hip 130 was injured and had to be pulled up on the backstretch following her work. The filly was taken off the track by horse ambulance.

The under-tack show continues through Thursday with sessions beginning each day at 8 a.m. The Midlantic sale will be held next Monday and Tuesday with bidding commencing both days at 11 a.m.