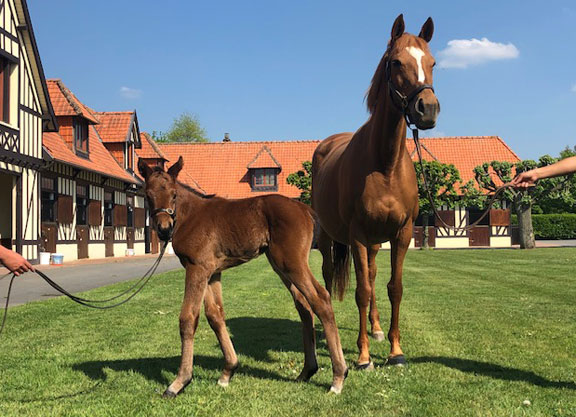 In the midst of a global pandemic, Thoroughbred enthusiasts can find some respite in the excitement of the arrival of the future stars of the sport. The team at Ecurie des Monceaux, in the Pays d'Auge region of France, celebrated an especially exciting addition overnight on Wednesday when its budding blue hen Starlet's Sister (Ire) (Galileo {Ire}) produced a bay filly by Dubawi (Ire).

Racing as a homebred for William Preston, Starlet's Sister failed to win in four tries for trainer Alain de Royer Dupre. She was a full-sister, though, to the G3 Prix Cleopatre winner Leo's Starlet (Ire) and a half to the listed-winning and G1 Prix Saint-Alary-placed Anabaa's Creation (Anabaa), and of course a daughter of Galileo whose dam Premiere Creation (Fr) (Green Tune) was Grade I-placed in the U.S., so Monceaux decided to roll the dice on Starlet's Sister as a broodmare, purchasing her privately as a 4-year-old.

Starlet's Sister's first foal, a daughter of Myboycharlie (Ire), brought a modest €12,000 as a yearling at Arqana's October yearling sale in 2015, but after winning the G3 Prix Penelope and finishing second in the Prix de Diane in 2017 she was purchased privately by Peter Brant and expatriated to the U.S. Sistercharlie (Ire) has won seven Grade Is over the last two seasons and was in 2019 named America's champion turf mare.

Next for Sistercharlie came the G3 Prix Bertrand de Tarragon winner My Sister Nat (Fr) (Acclamation {GB}), also purchased privately by Brant and Grade III-placed for Chad Brown last November. Shortly after buying Sistercharlie Brant signaled his admiration for Starlet's Sister by snapping up her first two yearlings colts at Arqana's August yearling sale: a €340,000 son of Siyouni in 2017 and a €400,000 colt by Charm Spirit (Ire) the following year. The former, Sottsass, won last year's G1 Prix du Jockey Club and stays in training as a 4-year-old, while the latter, Radiant Child (Ire), is an unraced 3-year-old in training with Chad Brown. Starlet's Sister's 2-year-old son of Fastnet Rock (Aus) was bought by David Redvers for €700,000 at Arqana last August to join the Qatar Racing roster, and the mare has a yearling filly by Dubawi. After producing another filly from a return visit to Darley's lynchpin, Starlet's Sister is booked back to Siyouni this season.

“Starlet's Sister's new Dubawi filly is a special filly, with quality and a great physical,” Bozo said. “We are so blessed to have this mare.”

The Dubawi over Galileo cross has been prolific, returning seven stakes winners (16% from foals), headed by Night Of Thunder (Ire) and Ghaiyyath (Ire). Siyouni over Galileo mares has worked out well, too, with Sottsass and Maqsad (Fr) the crosses two stakes winners from 21 foals. Galileo has, of course, meshed very well with daughters of Siyouni's sire Pivotal, that cross producing six Group 1 winners thus far.

“Siyouni has obviously worked well with Starlet's Sister and he's worked well with other Galileo mares, so it was an easy decision,” Bozo said. “The yearling filly is lovely, she has a lot of quality and very much takes after Dubawi.”

Starlet's Sister is, however, far from the only standout in the Monceaux pastures. Regular visitors to Arqana's August yearling sale will be familiar with Platonic (GB) (Zafonic) and her daughters, who have cumulatively produced eight seven-figure yearlings and three yearling sale top lots. The 21-year-old Platonic is carrying her 14th foal, a Siyouni due in early May, and Bozo said if all goes well she will visit Wootton Bassett (GB).

“Platonic is in great form,” Bozo said. “She is in foal to Siyouni and if things go well, if she's fine after foaling and we have enough time, we will cover her with Wootton Bassett. We don't want to travel her anymore because she likes her home and she's beginning to be an old mare now, and we're happy to send a nice mare like that to Wootton Bassett, who is quickly proving himself as an emerging stallion.”

Platonic's star producer has been the 15-year-old Prudenzia (Ire) (Dansili {GB}), the dam of G1 Irish Oaks winner Chicquita (Ire) (Montjeu {Ire}) and the globetrotting Magic Wand (Ire) (Galileo {Ire}), winner of the G1 Mackinnon S. and placed in no fewer than nine additional Group 1s in four countries. Prudenzia has supplied a remarkable five seven-figure yearlings and two yearling sale toppers, leaving aside Chicquita's €6-million pricetag at the Paulyn dispersal in 2013. Prudenzia has a yearling colt by Galileo (Ire), and while she came up barren for 2020 after being again covered by Galileo, she has just returned home from a trip to Newmarket carrying a full-sibling to her Dubawi filly that fetched a sale-topping €1.625-million from Godolphin at Arqana last August.

“It's the same mating as the 2-year-old currently in training with Andre Fabre called Philomene (Ire),” Bozo said. “She has a 3-year-old also in training with John Gosden [Qatar Racing and Lady O'Reilly's Enemy (GB) (Muhaarar {GB})] who won his only start at two and we're looking forward to seeing him run again this year.”

The sales ring high point for Platonic's daughters must be last year's Arqana August sale, where Prudenzia and her 8-year-old full-sister Prudente (Fr) provided, as back-to-back lots, the sale's two highest-priced lots and only seven-figure yearlings. Prudente's first foal, a Galileo colt, preceded Prudenzia's Dubawi filly in the ring and fetched €1.5-million from Japanese trainer Mitsu Nakauchida. Prudente has a yearling colt by Siyouni to go to market this year, and Bozo brought us up to date on her latest developments: “Prudente is in foal to Lope De Vega,” he said. “She hasn't foaled yet but she's close, and she'll then go to Night Of Thunder. He's proving to be a very interesting stallion. He's bringing some power and he's bringing Galileo and Dubawi, which is a very exciting thing to bring into this family.”

“She's the same as Platonic, they're getting up in age and they live together,” Bozo said. “She's in foal to Siyouni and she's due in early May. The same thing, if she foals and is in good form after foaling and we can cover her again, she'll go back to Siyouni. She has a very, very nice yearling filly by Siyouni so we're going back to the best stallion in France.”

While racing action in the Northern Hemisphere is currently limited due to COVID-19 restrictions, Monceaux managed to make headlines earlier this month as the breeder of 3-year-old filly Lashara (GB) (American Pharoah), who won at Gulfstream Park in Florida for owners Cindy Hutson and Bob Masterson and trainer Mark Casse. Deuce Greathouse had selected Lashara from the Monceaux consignment for €850,000 at the August sale of 2018, and she is the first foal out of Marbre Rose (Ire) (Smart Strike). Marbre Rose was campaigned as a homebred by Monceaux in partnership after being led out unsold at €95,000 at Arqana August in 2012, and she was twice Group 3-placed over a mile in France before crossing the Atlantic to win Woodbine's GIII Seaway S. Marbre Rose has a Dubawi colt “who looks like a fast type with a lot of power” and is currently in foal to Siyouni and booked back to him.

Marbre Rose is out of Manerbe (Unbridled's Song), who Monceaux bought as a yearling and who won once in the U.S. She has served her owners well as a broodmare; in addition to Marbre Rose she has produced Gidu (Ire) (Frankel {GB}), a €410,000 yearling who has won a pair of stakes in America. Manerbe, a half-sister to Grade I winner and producer Zoftig (Cozzene), is also the dam of the Listed Prix de Saint-Cyr winner Aviatress (Ire) (Shamardal). Monceaux sold Aviatress to the Roth family's LNJ Foxwoods for €450,000 as a yearling in 2017 and later bought back into her to go to stud. She was recently scanned in foal to Siyouni for her first covering.

“It's really a family that is blooming at the moment,” Bozo said. “We bought Manerbe as a yearling and she's been a really great mare for us. She won't have a foal this year but she has a Kingman yearling colt and she is in foal to Siyouni [for 2021]. Her Kingman colt is very athletic, very much like Unbridled's Song. He'd be one of the good colts we'll have this year at the sales.”

“Golden Valentine has her first foal by Galileo who is a yearling that we're going to sell in Arqana this year, and he's a lovely scopey colt with great balance,” Bozo said. “It's one of the nicest pedigrees we have, and the mare has produced a colt foal by Dubawi. Unfortunately I haven't seen him because he was born in England in the great care of Lordship Stud, and I haven't been able, because of COVID-19, to go see all these foals. But from the videos I've gotten he seems to be a quality colt, and she's going back to Dubawi.”

Also having foaled at Lordship Stud for Monceaux are Birch Grove (Ire), a stakes-winning daughter of Galileo who has produced as her first foal a Frankel (GB) filly, and Militante (Ire) (Johannesburg). The dam of G3 Prix de Lieurey winner Wind Chimes (Ire) (Mastercraftsman {Ire}) has produced a filly foal by Galileo.

“Birch Grove is a mare we bought at Tattersalls in December [for 700,000gns last year] for a partnership and she foaled a filly foal by Kingman,” Bozo said. “Again, I haven't been able to see her but I'm pleased with the videos I've got from Lordship Stud. She's going to Dubawi to reproduce the Dubawi/Galileo mating.”

“Militante is a mare I really love,” he added. “She has a smashing yearling filly by Frankel and she foaled a Galileo filly foal that again I haven't seen but hopefully she'll come back soon. She has been covered by Kingman.”