Home » Archive » Shared News » Lashara Has Hutson in the Game

Lashara Has Hutson in the Game 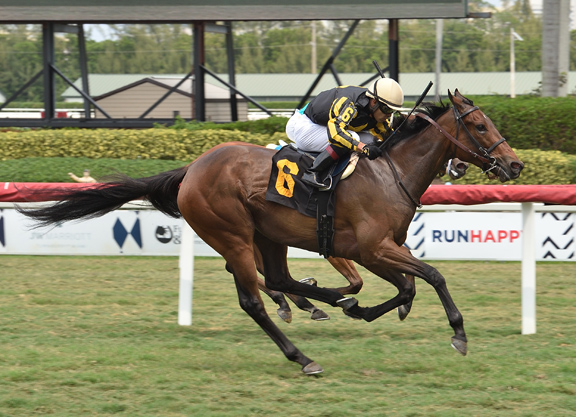 When Cindy Hutson decided to upgrade her small racing stable a few years ago, bloodstock agent Deuce Greathouse suggested a trip to Deauville for the 2018 Arqana August Yearling Sale where owner and agent purchased a daughter of Triple Crown winner American Pharoah for a headline-grabbing €850,000. The filly, now named Lashara (GB) and owned by Hutson in partnership with Robert Masterson, graduated in her turf debut on her third birthday at Gulfstream Park Saturday.

Hutson, whose late husband Dan owned the Hutson Ag Company in Murray, Kentucky, first decided to get involved in racing some five years ago.

“I was visiting a friend of mine from high school, Alan Usher,” Hutson recalled Monday morning. “I was visiting with him and he lives in Louisville. And they were talking about the horses and running and I just got interested and asked if I could partner with him. That's how it got started.”

Owning racehorses was a natural fit for the Kentucky native.

“I am from Kentucky and I went to the Kentucky Derby a few times,” Hutson said. “The horses are beautiful and I grew up with them around, my grandkids all ride. I love watching the horses run and I really enjoy visiting the barns and meeting the trainers and the jockeys. It's just been a later hobby for me. I don't know that much about it, but I'm learning.”

After racing seven or eight horses, Hutson decided to switch her focus to fewer horses of higher quality.

“I met Deuce through Alan and Deuce asked me to go to Deauville with him,” Hutson said. “We went and of course we saw Lashara there. It was very exciting–I didn't realize how much attention we were going to get.”

Greathouse was already familiar with Lashara's family when the filly (hip 158) went through the ring at Arqana. His family's Glencrest Farm owned her third dam Mrs. Marcos (Private Account) and bred and campaigned that mare's Grade I-winning daughter Zoftig (Cozzene).

“Zoftig was probably the best race filly that Glencrest bred and raced themselves in the last 20 years,” Greathouse said. “She was pretty amazing. Obviously, it's a little further back in that family, but it's a great family, turf and dirt. You like sticking with what you've had luck with in the past.”

Greathouse purchased the mighty Tepin on behalf of Robert Masterson as a yearling in 2012, and he brought Masterson in to partner with Hutson on the Arqana yearling. The filly was then sent to Tepin's trainer Mark Casse.

“I did not know him at all,” Hutson said of Masterson. “He wasn't in Deauville, but Deuce called him and said, 'There is this beautiful horse here and Cindy is wanting to go half.' So he said, 'Sure.' He picked the trainer because he knew more about it than me.”

Out of Marbre Rose (Smart Strike), a stakes winner on turf and a half-sister to Gidu (Ire) (Frankel {GB}) who is graded placed on the grass, Lashara made her first start sprinting over the main track, finishing a well-beaten eighth in Hallandale Mar. 15.

“We had to get her started, so we ran her on the dirt,” Greathouse said of that first start. “Typical of a lot of good grass fillies, she worked good on the dirt. But a lot of those grass horses will fool you in the morning, and not really handle the dirt in the afternoon. She got the perfect schooling, though. She got bounced around a little bit, got some dirt in her face and obviously got plenty out of her first start. And then she came back and worked great on the grass.”

Lashara prepped for her grass debut with a bullet four furlongs in :47.60 (1/40) over the Palm Meadows turf Apr. 4 and was sent off the 8-5 favorite Saturday. Well back in the early going, the bay filly charged up into contention turning for home and closed stoutly down the lane to win by 3/4 lengths (video) over Champagne Lady (Uncle Mo).

“My granddaughter and I watched the race on TV here at my house,” Hutson said. “She pulled from all the way back and smoked them-she did a great job. We were really excited to see her win.”

Like much of the racing calendar, Lashara's next start is up in the air.

“I think that was a very salty maiden race,” Greathouse said. “The filly that was second was a full-sister to [Grade I winner] Mo Town. I think Lashara is a graded-stakes caliber filly, but I think anybody who makes any predictions about where they are going next right now would be kind of crazy because we have no idea what's going on.”

Hutson currently has three horses in training and is taking a wait-and-see approach to growing her stable.

“My plan is to see how Lashara does and see what comes of that,” she said. “If we sell some of these other ones, we'll want to get another one for sure.”