Another Star To Ascend In Deauville 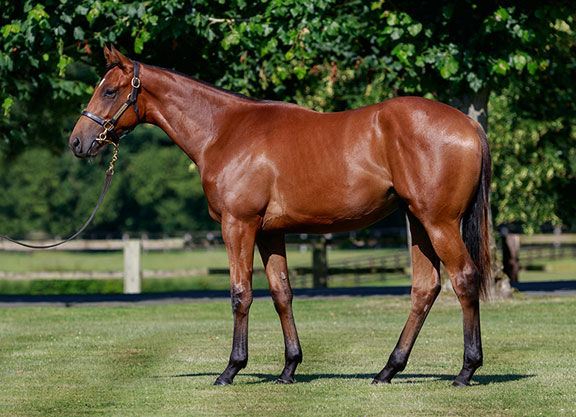 DEAUVILLE, France–Deauville is commonly referred to as the 21st arrondissement, and during the opening session of Arqana’s August yearling sale on Saturday the number 21 is likely to be a star attraction, as it has been assigned to Monceaux’s Fastnet Rock (Aus) colt out of star producer Starlet’s Sister (Ire) (Galileo {Ire}).

The bay received another timely update just last weekend when his half-sister Sistercharlie (Ire) (Myboycharlie {Ire}) took her sixth Grade I when defending her title in the GI Beverly D. S.

“She throws very correct horses that are good movers, but especially with great minds that are so easy to deal with,” said Ecurie des Monceaux’s Henri Bozo. “To have a career like Sistercharlie has had, she needs a great mind and I think that’s the main feature of her progeny.”

Starlet’s Sister was unplaced for trainer Jean-Claude Rouget, and acquired privately by Monceaux as a 4-year-old.

“We bought her out of training when she was four through Hubert Guy,” said Bozo. “She was by Galileo out of a nice family–not the best at the time, but we decided to give it a chance. She was by Galileo, and the trainer said she had talent even though she couldn’t show it on the track. So we gave it a go and bought her.”

“It’s a bit of luck in the business that you have sometimes,” Bozo said. Explaining the decision to send the mare to Myboycharlie for her first cover, he said, “I wanted to cover her at a reasonable fee with a proven stallion with a kick, and that worked well with Myboycharlie. But this mare can produce with any stallion. She’s one of these gold mines that we’ve been very fortunate to acquire.”

Reflecting on My Sister Nat and Sottsass, Bozo said, “We then sent her to Acclamation who is a stallion I like. In a different style she produced a very gifted filly who was a Group 3 winner and Group 2-placed in France and, according to the trainer, had a lot of talent. We then sent her to Siyouni, who is a stallion we’re using more and more. He works very well with Galileo mares and Sottsass is a champion. He’s a very impressive horse, he won the French Derby beating a nice horse very easily.”

Starlet’s Sister’s biggest fan, Bozo aside, surely is Peter Brant. Brant purchased Sistercharlie privately prior to her runner-up effort in the 2017 G1 Prix de Diane, and just a few months later he turned up to buy Sottsass at Arqana August for €340,000. He added Radiant Charm, currently in training alongside Sistercharlie with Chad Brown, to his stable last August, with Michel Zerolo working as agent.

Reflecting on the early stages of Sistercharlie’s racing career, Zerolo said, “What I liked best about her was her third race, which was a conditions race at Saint-Cloud where she was very impressive coming from the back of the pack to win a race that was slowly run. She was very impressive.

“Sottsass was a good-looking horse, a very good mover and very athletic,” Zerolo added. “He had a great demeanour. It was love at first sight. Sottsass probably takes a lot after his mother; there’s a little bit of Siyouni in him but also a mix of Galileo as well. He’s a very good-looking horse.”

It would surprise no one were Brant to have his eye on the Fastnet Rock colt this weekend, and Bozo said of him, “we sent the mare to Fastnet Rock, which is a stallion I really love. He’s proven and he’s very good. He can produce very genuine horses who last and the mating with Galileo mares has been amazing. She produced a beautiful colt who is very correct, walks very well and is a powerful animal with a good mind. He should follow his siblings’ footsteps.”

At just 10 years of age, should Starlet’s Sister continue in the same kind of form, she is poised to become a highly influential broodmare. The chestnut has a Dubawi filly foal at foot at present and is back in foal to that Darley sire.

Asked if the Dubawi filly could feature in the Monceaux draft next August, Bozo said, “it’s early times but there’s a chance she will. It will depend on what we have from the mare [next year], who is carrying to Dubawi again but I think she’s another special individual. With a Galileo mare, Dubawi is an obvious choice so for next year we’ll see if we go to Dubawi again or if we go back to Siyouni.”

With what Starlet’s Sister has achieved thus far from a range of different sires, it would seem her options are nearly limitless.