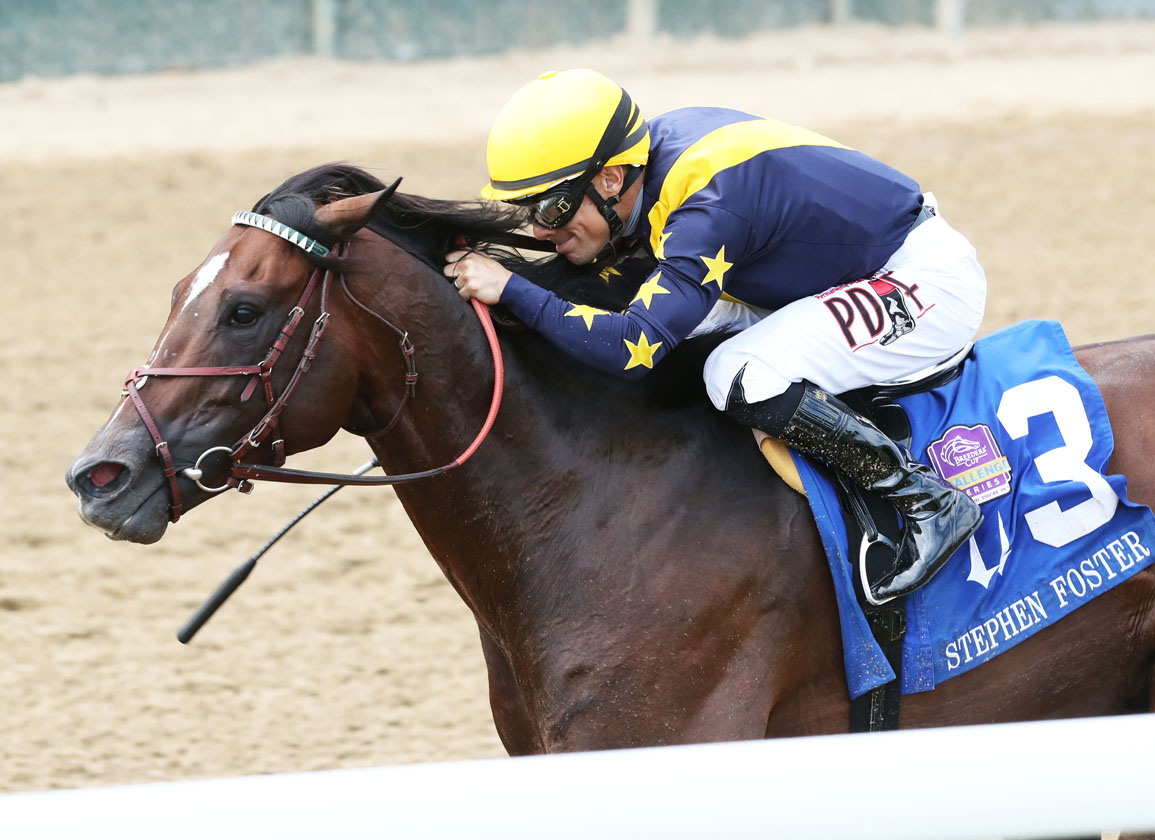 The streaking Olympiad (Speightstown) punched his ticket to the GI Breeders' Cup Classic in style with an ultra-impressive fifth consecutive victory in Saturday's 'Win and You're In' GII Stephen Foster S. at Churchill Downs.

The 3-2 favorite raced in between rivals as five of them stacked up passing the grandstand the first time. Olympiad found a perfect spot rounding the clubhouse turn and raced in a tracking second behind Caddo River (Hard Spun) through sharp fractions of :23.05 and :46.45. He turned up the heat on the pacesetter on the far turn as last year's promoted GI Kentucky Derby winner Mandaloun (Into Mischief) wound up with a three-wide move of his own.

Olympiad hit the front at the quarter pole, drew clear with authority in the stretch and was never seriously threatened by the late rally of GI Cigar Mile H. winner Americanrevolution (Constitution) to score by 2 1/4 lengths. Proxy (Tapit) flew from the clouds for a well-beaten third; Mandaloun, making his first start since a well-beaten ninth in the Saudi Cup, was a tiring fourth.

“I thought it was a very game win this afternoon,” winning Hall of Fame trainer Bill Mott said. “There were some nice horses in this field and I thought he did things rather easily. It was really nice to see him win like that. We've always thought about running him in the [Aug. 6 GI] Whitney [at Saratoga], so I think that would be the next possible target.”

Winning jockey Junior Alvarado added, “This horse has such a big stride on him and really extends it late in races. I think as he's gotten older, he's gotten faster in each start. Today, we sat in a good position just off of the early pace and he showed how powerful his stride can be. I asked him just a little bit in the final furlong and he continued to get faster. He's a great horse and has shown his talent all year long. It will be a fun rest of the year.”

Tokyo Time is the dam of the maiden 3-year-old colt Friendship Road (Quality Road), a 2-year-old filly by War Front and a yearling colt by American Pharoah. She was most recently served by Quality Road.