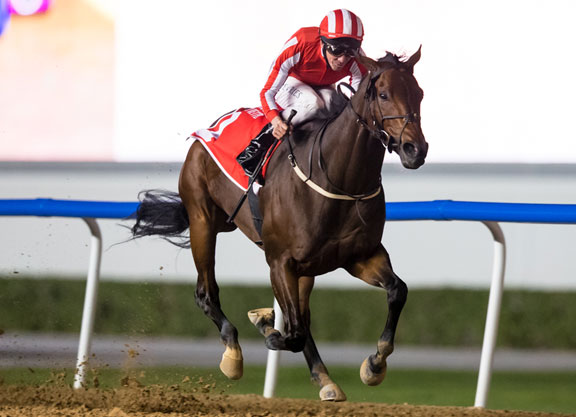 Salute the Soldier (Ger) (Sepoy {Aus}) found the added real estate of the 2000-metre G1 Al Maktoum Challenge Round 3 no problem and earned his first Group 1 win at Meydan in front-running style on Saturday evening.

The Fawzi Nass trainee scooted straight to the fence and battled with Tailor's Row (Street Cry {Ire}) and Roman Rosso (Arg) (Roman Ruler) into the clubhouse turn before shaking off those rivals to take command outright. Approaching the far bend, Tailor's Row called it a day and Roman Rosso was left to press the Victorious colourbearer as Hypothetical (Ire) (Lope de Vega {Ire}) stalked that pair just behind.

Salute the Soldier kept finding at the head of affairs inside the final quarter mile, with Hypothetical appearing to bring the strongest challenge, but the 6-year-old gelding held firm to the line to win by 1 3/4 lengths. Hypothetical was second three lengths in front of Roman Rosso. The margin back to  Thegreatcollection (Saint Anddan) in fourth was 1 1/4 lengths. Salute the Solider is the second Group 1 winner for his sire Sepoy (Aus) (Elusive Quality).

“I expected the pace to be set from the outside, he jumped well, and the guys next to me didn't want it so I was happy to lead,” said jockey Adrie de Vries. “I got my own pace. He is just getting better, and he is so much fun. He is a great character, there is always something special about him. He didn't want to go to the start today, he has his tricks in the morning as well. I think he still has got a bit left in the tank, he continues to improve and I hope we have him spot on for the big day.”

Added Nass, “He showed us last year that he absolutely glides on the Meydan dirt, and distance wise he always showed he would stay a lot further. He was actually never built as a sprinter as you can see. Luckily it paid off going the extra couple of furlongs.

“When you have a horse that has already qualified for the Dubai World Cup, we did think why take a risk or running a race [Al Maktoum Challenge Round 3] where [we] could get beaten. But we thought about it and it is pretty long gap from his last race to Dubai World Cup day, and the horse is quite enthusiastic, and we thought why not run him today.”

Third in the Listed Dubai Duty Free Cup S. at Newbury in September of 2019 in the colours of Mr. and Mrs. P. Hargreaves and Alan Spence for trainer Clive Cox, the bay was knocked down for 380,000 guineas to Oliver St Lawrence Bloodstock later that fall at the Tattersalls Autumn HIT Sale. A winner of the 2020 G3 Burj Nahaar on Super Saturday last term for these connections, Salute the Soldier did not face the starter again until a fourth-place run in the Listed Dubai Creek Mile on Dec. 17. He reported home third in the G2 Al Maktoum Challenge R1 on Jan. 21 prior to his G2 Al Maktoum Challenge Round 2 score on Feb. 11.

Salute the Soldier is the second top level winner after MG1SW Alizee (Aus) for his four-time Group 1-winning sire Sepoy. Originally a G1 Blue Diamond S. and G1 Golden Slipper winner who progressed to take the G1 Manikato S. and G1 Coolmore Stud S. at three, the son of Elusive Quality stood under the Darley banner in both hemispheres and is currently based at Darley's Northwood Park in Victoria.

The sixth foal out of his unraced dam, Salute the Soldier is the best by a large margin. Street Fire's only black-type winner, she has an additional four winners to date. Her 2018 filly, Fire Dancing (GB) (Iffraaj {GB}), has yet to race, and she has a yearling filly by that sire, too.