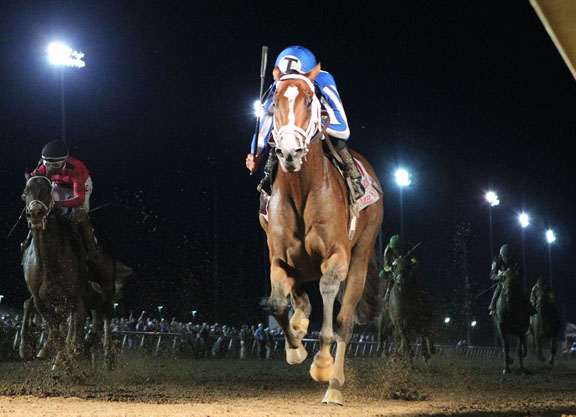 The 4-5 post-time favorite to add to previous victories in the GIII Pat Day Mile and in the GIII Matt Winn S., Mr. Money (Goldencents) continued his winning ways with a convincing three-length victory in the $500,000 GIII Indiana Derby Saturday evening.

Outposted in gate 11, Mr. Money hit the ground running and managed to secure a good stalking position from third as Maryland raider Alwaysmining (Stay Thirsty) and Long Range Toddy (Take Charge Indy) eyeballed one another on the front end. The front-runners were forced to deal with a bit of in-race adversity in the form of longshot Eskenforit (Eskendereya), who dumped jockey Julien Leparoux a couple of strides away from the gate and ran a fair bit of interference, particularly in the final half-mile. Mr. Money traveled in the slipstream of the loose horse around the turn and into the stretch and, with Eskenforit lapped on his outside, raced away to the victory. Gray Magician (Graydar) capitalized on a cozy inside trip to grab second, while Math Wizard (Algorithms) proved that his runner-up effort in the GIII Ohio Derby was no fluke, closing from the latter half of the pack to finish a game third despite being hampered by Eskenforit in upper stretch.

A respectable fourth in last year’s GI Breeders’ Cup Juvenile, Mr. Money was an unfinished product when seventh to future GI Preakness S. winner War of Will (War Front) in the GII Risen Star S. Feb. 16 and fifth to stablemate By My Standards (Goldencents) in the GII Louisiana Derby. Dropped back to Churchill’s one-turn mile for the Pat Day Mile, the bay defeated next-out GI Woody Stephens S. hero Hog Creek Hustle (Overanalyze) by better than five lengths and he was exiting a dominating 6 1/2-length tally in the Matt Winn June 15.

A half-brother to the 2-year-old colt Mr. Kidd (Palace), a yearling filly by Awesome Again that fetched $190,000 as a weanling at KEENOV last fall and a filly foal by Speightstown, Mr. Money is out of a winning daughter of O’Toole, a full-sister to GSW Witty and to GISP Helsinki. His stakes-winning third dam produced G1 Dubai World Cup hero Well Armed (Tiznow) and Life Well Lived (Tiznow), the dam of GISW American Patriot (War Front).