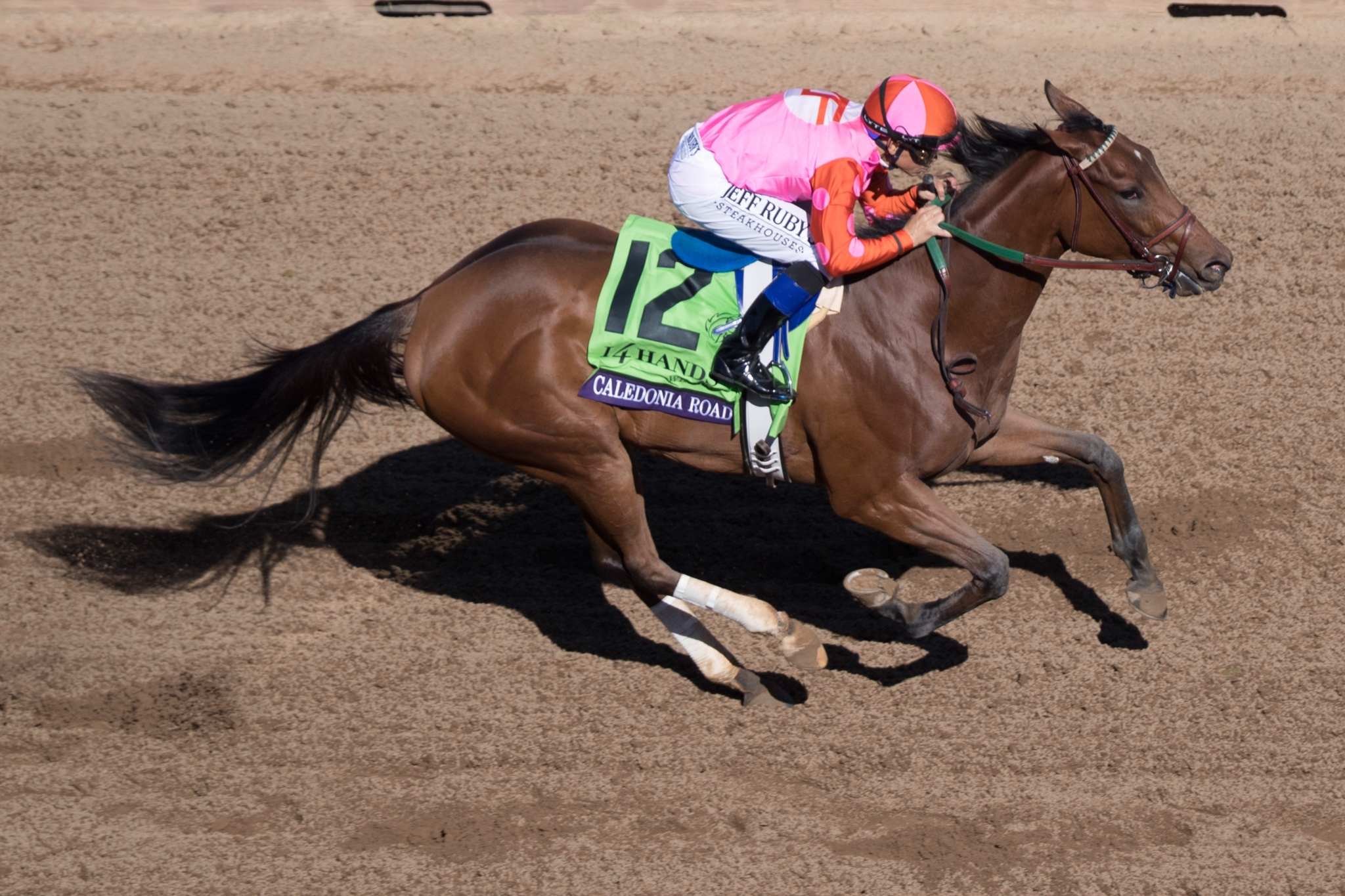 As is the case on racing's biggest days, this year's Breeders' Cup featured both the highs and lows that are often witnessed at the highest level of racing. Several of the weekend's winning (and losing) connections offered updates Sunday regarding their charges' exit out of their respective races in addition to some insight into the future:

“That was a horrible trip,” offered Ruis. “He had to race wide all the way around there. He never could get in.”

“He'll get 60 days,” confirmed Ruis. “We'll keep him there and tack walk him. We'll plant some grass for him, just for him. He's just a baby. We'll let him grow into his 3-year-old season. He's had a hard campaign.”

Ruis indicated Bolt d'Oro will be targeted at next spring's GII San Felipe and GI Santa Anita Derby ahead of a tilt at the 2018 Triple Crown.

GI Juvenile Fillies victress Caledonia Road (Quality Road), campaigned by Zoom and Fish Stable Inc., Charlie Spiring and Newtown Anner Stud, took the money and ran, exiting Del Mar early Sunday morning and beginning her voyage back to trainer Ralph Nick's South Florida base. She was expected to make a stop in Kentucky before reaching her final destination at Gulfstream Park in Hallandale.

“How could you not be feeling great,” said Nicks after garnering his first Breeders' Cup win. Caledonia Road captured her debut at Saratoga by 2 ¾ lengths before finishing second in the GI Frizette at Belmont.

“I expected her to run really well,” said Nicks. “You never know when you get to this level of competition. I thought her race at Belmont was outstanding, because she got away bad and made a strong middle move. The way she's done since then is nothing but move forward. “I expected a good race out of her, but for her to go out there and dominate those fillies is just an amazing feat for her.”

“We'll probably work backwards from the GI Kentucky Oaks,” he said. “We'll get her home and evaluate her, see how she is and kind of be smart about what we do.”

Carl Moore's Finley'sluckycharm (Twirling Candy), who finished ninth as the third choice in the GI Filly & Mare Sprint, was headed back to Kentucky and continues on to Bret Calhoun's winter base at the Fair Grounds and where she is expected to get 30-40 days off.

“She came out of the race good,” Calhoun said of the filly who finished worse than second for the first time in 12 sprint races. “[Jockey] Brian [Hernandez Jr.] thought she was just spinning her wheels out there but we have no excuses.”

According to Calhoun, the three-time graded stakes winner is expected to give the four-year-old a race at the Fair Grounds in March before a tilt at the GI Madison at Keeneland in April followed by the GI Humana Distaff at Churchill Downs in May.

Stonestreet Stables and Peter Leidel's Lady Aurelia (Scat Daddy), who crossed the line in 10th as the 9-10 favorite in the GI Breeders' Cup Turf Sprint, appeared fine Sunday, according to trainer Wesley Ward. The Group 1 winner will get a breack before bing pointed toward a 4-year-old campaign.

“She came out good, but unfortunately it's just been a long season,” admitted Ward. “She's heading to Robert Turner at Stonestreet [Farm] and she's going to get a little breather. I would like to get her relaxed physically and mentally and, hopefully, get back going again next year. She's accomplished a lot this season, but unfortunately we couldn't close it out. We'll try next year.”

“They are all getting a bit of a break and we won't see any of them until early spring,” confirmed Casse. “We have bigger fish to fry in the spring with [GI] Kentucky Oaks horses, hopefully, so we don't need to rush them into anything.”

Already looking ahead to the next mission of Stormy Liberal (Stormy Atlantic), trainer Peter Miller offered a glimpse at what may lie ahead for the 30-1 shot winner of Saturday's GI Turf Sprint.

Miller also saddled Roy H (More Than Ready), winner of the GI Sprint and Richard's Boy (Idiot Proof), runner up to his stablemate in the Turf Sprint.

“They've also asked about, Roy H and Richard's Boy, but Stormy Liberal is more likely, because he's had more of a break,” admitted Miller. “He had a break coming into this race [off since June], so he's a fresher horse. Richard's Boy has run hard and Roy H has run hard, so we'll back off of those two for a while.”

Miller indicated long-range plans for all three runners will include mapping out a course to next year's Breeders' Cup at Churchill Downs.

“They have all eaten up and they are all in great condition,” affirmed Keating.

“Nothing has been decided yet, but I think that [O'Brien] will be thinking of sending Highland Reel and Lancaster Bomber out to the Hong Kong International races [Dec. 10].”

The Irish-based runners heading back to Ballydoyle are scheduled to leave early Monday morning.

Also listed among possibilities to make their next starts in Hong Kong's International races:

Wuheida (GB) (Dubawi {Ire}) – posed for a Godolphin team photo Sunday morning and is another whose future racing career remains undecided. Godolphin traveling lad Tim Denniff said Sunday: “She is absolutely fine today and has been a real star. [Trainer] Charlie Appleby is due to have a meeting with Sheikh Mohammed in the next couple of days and a decision on whether she is finished for the season or has one more run in Hong Kong will be discussed.”

Additionally, French Group 1 winner Marsha (Ire) (Acclamation {GB}), sixth in the GI Turf Sprint and who gave her trainer Sir Mark Prescott his first Breeders' Cup runner, remains on course to be offered at the Tattersalls December sale in Newmarket.

The primary contingent of English and French horses were scheduled to depart yesterday.

Newtown Anner Stud's Beckford (GB) (Bated Breath {GB}), fifth in the GI Juvenile Turf, will reportedly get some R&R at his owners' farm in Kentucky before returning to the races in America in the early part of next year and returning to trainer Gordon Elliott in Ireland.