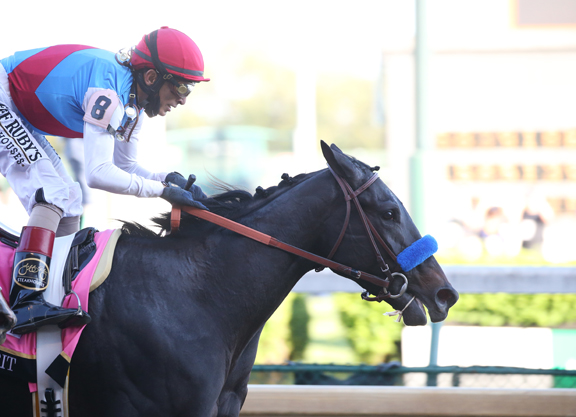 An attempt by the connections of Medina Spirit (Protonico) to have a third-party lab perform a new series of tests on the colt's bodily fluids in the wake of the colt's GI Kentucky Derby betamethasone positive has resulted in allegations by the Kentucky Horse Racing Commission (KHRC) of a “lack of candor and contemptuous conduct by the New York Laboratory, [trainer Bob Baffert and owner Zedan Racing Stables], or both.”

According to a status report and motion for order filed in Kentucky's Franklin Circuit Court July 19, the KHRC wants the judge in the case to compel that Baffert and/or Zedan Racing disclose what methods of testing were performed on a urine sample whose remnants allegedly came back damaged after undergoing testing July 14 in New York.

It is the second time in seven weeks that a party in this court case has alleged that samples came back contaminated from an accredited lab.

On June 1–the same date that Medina Spirit's referee sample was announced as positive–the KHRC informed Baffert and Zedan that body fluid remnants had been damaged during transport to the split-sample testing lab.

The July 14 new round of testing performed by the New York Equine Drug Testing and Research Laboratory was part of a court mandate in a lawsuit initiated by Baffert and Zedan Racing on June 7 that sought, in part, some form of “limits of detection” testing that could purportedly show that the betamethasone was present along with other compounds in the topical ointment Otomax.

Betamethasone is a corticosteroid allowed in Kentucky as a therapeutic medication, but state rules require at least a 14-day withdrawal time before racing.

Attorneys for Baffert and stable owner Amr Zedan have stated a desire to prove that the Derby winner's betamethasone positive–which has yet to be adjudicated by the KHRC–resulted from an ointment to treat a skin condition and not from an intra-articular injection.

Yet any level of detection on race day is a Class C violation in Kentucky, with no distinction listed in the rules pertaining how the substance got inside a horse.

Sullivan wrote that, “In signed affidavits, Guilfoil and Howard said the [New York] lab's program director, Dr. George Maylin, initially insisted on retaining remnants of the original sample, and subsequently said he had not read the court order requiring the return of those remnants despite a June 21 email in which he had pledged to abide by that order….

“When the remnants were ultimately produced, however, the KHRC filing says the urine tube contained only one to two milliliters of 'bloody fluid,' a broken serum separator tube and another tube with serum that had been saved–all presented at room temperature instead of frozen, as preferred. According to Guilfoil and Howard, Maylin explained that most of the urine sample had been used up in testing, but did not provide a clear answer when twice asked what testing had been conducted,” the Courier-Journal story explained.

Maylin did not immediately respond to an interview request from the Courier-Journal on Tuesday.

W. Craig Robertson, an attorney for Baffert and Zedan, told the paper the plaintiffs would be responding in court, adding that, “The statements contained in the KHRC's status report are inaccurate. We have intentionally had no direct communication with the New York lab, so we are unaware of any testing or the results.”