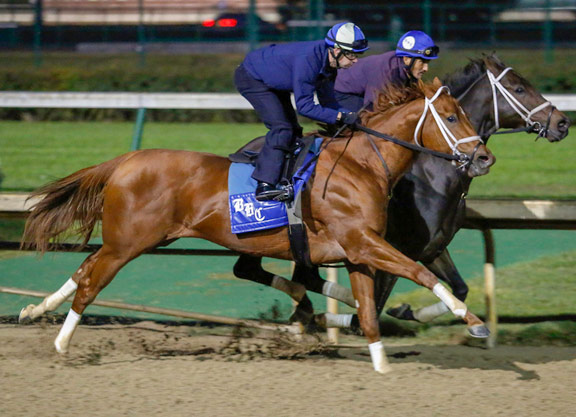 Ever since Monomoy Girl (Tapizar) surged past the Churchill Downs finish line to take the 2018 GI Breeders' Cup Distaff, fans have eagerly awaited her return. It's been a long road over the past year and a half, but the now 5-year-old Eclipse champion is slated to make her 2020 debut beneath the Twin Spires Sat., May 16.

The five-time Grade I winner will be the star of Churchill Downs' opening day, facing six other fillies and mares in a one-mile $80,000 allowance optional claimer. Her competition includes dual stakes winner Fashion Faux Pas (Flatter), as well as the GSW & GISP 'TDN Rising Star' Talk Veuve to Me (Violence).

“It's been an uphill battle since the Breeders' Cup, but she's responded well this time around,” said trainer Brad Cox. “We have her ready to run and she's moving great; she's happy.”

Following her championship-clinching victory in the Distaff, Monomoy Girl received a freshening before returning to the Fair Grounds at the beginning of 2019. She was able to put in five recorded works and was preparing for her 4-year-old debut when a sudden case of colic sent her to the sidelines.

BSW Bloodstock's Liz Crow carefully monitored Monomoy Girl's progress as she worked through the setback. “She was in pretty rough shape at Rood and Riddle. She lost a lot of weight, and it was pretty serious.”

Monomoy Girl was sent to rehab at WinStar before heading to Churchill in July of last year to rejoin Cox.

“She was doing extremely well and we felt like she was a couple weeks from the races,” said Cox.

But this time, a hamstring injury kept her from the starting gate.

Crow said, “She breezed four times, and on the fourth breeze, she didn't come out of it well the next day. She was off behind.”

She was sent to Paul Sharp's stable in Florida and stayed there for the remainder of 2019.

At the beginning of this year, Monomoy Girl rejoined the Cox barn for the third time. She was able to put in three works at Fair Grounds before shipping to Lexington and has been training consistently at Keeneland since.

Crow credits Dr. Wes Sutter of Rood and Riddle for getting the mare back to the track for a third time.

“I really don't think we'd be back here without him,” she said. “He played a major role both when she colicked and when she had her hamstring injury. He's been involved in every step of the process.”

Monomoy Girl put in a work in the company of stablemate and multiple graded stakes winner Owendale (Into Mischief), clocking five furlongs in :59 4/5.

“It was a fantastic work,” said Cox. “She's a really good work horse. Honestly, I think she's moving as well as she's ever moved.”

Jockey Florent Geroux, who has ridden Monomoy Girl in all but one of her 11 career starts, was up for the breeze and will also be aboard for Saturday's start.

“She's coming along very nicely,” Geroux said. “She's very stable every week. We're happy with her and are hoping she can run back to her winning ways of when she left.”

Both Crow and Cox give credit to owners Michael Dubb, Sol Kumin, Mike Caruso, and Stuart Grant for sticking with their mare through these setbacks.

Crow said, “I remember thinking [after the hamstring injury], 'Are they going to retire her?' But they are game. To have a filly that's a champion, that's worth a lot of money in the sales ring, and to say 'we're not going to sell her, we're going to try again even though the odds aren't in our favor,' I think that's pretty cool.”

“The owners have never quit believing in her,” Cox added. “And neither have we. But they know that I'm not going to run her if she's not where she needs to be. They've trusted me and we work well together. She's a fantastic filly. She's a champion.”

“I think it's really important for racing fans to have something they can follow,” Crow said. “I'll tweet a picture of her and it's amazing the response you get. People really love her and I think the rivalry between her and Midnight Bisou (Midnight Lute) during her 3-year-old campaign captured a lot of fans.”

“The ultimate goal would be to get her back to the Breeders' Cup,” Cox said. “That's a dream right now, and it's a long ways off, but as long as she's doing well, it's something that hopefully it's in the cards.”

Monomoy Girl has already visited Keeneland's winner's circle after claiming the GI Ashland S. during her sophomore season in 2018.

As for Saturday's start, a victory would push the champion past $3 million dollars in earnings and would mark her fifth win at Churchill.

“It's been an emotional roller coaster, for sure,” said Crow. “The setbacks have been hard, but we're all so excited that she's back and I think it'll be really meaningful to get to see her run, to see her back in the starting gate.”