Monomoy Girl Returns a Winner Beneath the Twin Spires 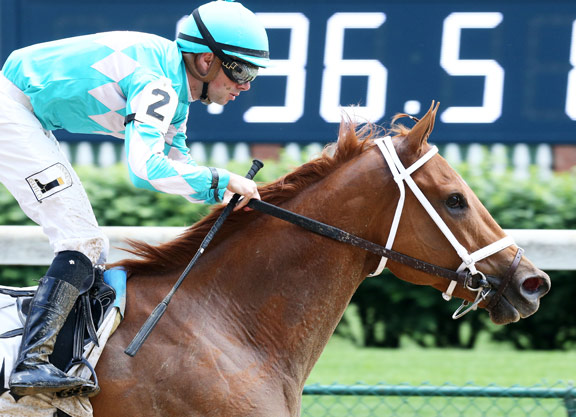 Champion Monomoy Girl (Tapizar) returned a winner after 18 months on the sidelines. Hammered down to 1-2 favoritism at the oval where she registered her two greatest triumphs, the chestnut was away in good order from the two-hole and was perched in a close-up fourth off the fence as Fashion Faux Pas (Flatter and Talk Veuve to Me (Violence) dueled through early splits of :22.87 and :46.33. Talk to Veuve to Me took control entering the far turn, but Monomoy Girl came roaring up behind her and was in front in a matter of strides. The Eclipse winner cruised clear in the lane under a hand ride from Florent Geroux and hit the line 4 1/2 lengths clear of a late-rallying Red Dane (Ity) (Red Rocks {Ire}).

“I felt very confident when she came off the turn in front,” trainer Brad Cox said. “It was a great race off the layoff. It was very positive seeing her be able to rate behind horses like that.”

Geroux echoed similar sentiments, saying, “She was able to rate a lot easier today than when she was 3-years-old. She gave us all the signs in the morning that she was ready. I think it is on to bigger things.”

Monomoy Girl took home the Eclipse Award for champion 3-year-old filly in 2018 after a season that included victories in the GI Kentucky Oaks, GI Acorn S., GI CCA Oaks and GI Breeders' Cup Distaff. She returned to Brad Cox in 2019, but was sidelined by colic after a quintet of published works. Returning to Cox again, Monomoy Girl was sidelines once more after a few works due to a hamstring injury and was shelved for the rest of 2019. She had been working steadily at Keeneland in preparation for this return.

The winner is a half-sister to Mr. Monomoy (Palace Malice), GSW, $327,162, winner of one of the divisions of this year's GII Risen Star S. Their dam Drummette summoned $1.85-million from Bridlewood Farm at the 2018 Fasig-Tipton November Sale carrying a foal by Mastery. The resulting foal is a now-yearling filly and was bred back to Tapit.