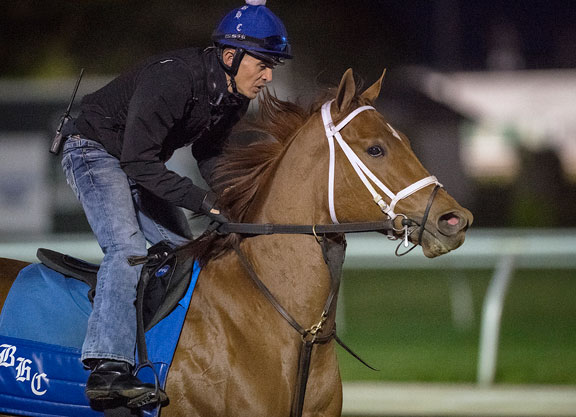 Champion and five-time Grade I winner Monomoy Girl (Tapizar) is recovering from a mild case of colic and will miss a planned start in the May 4 GI La Troienne S., co-owner Sol Kumin confirmed to TDN Wednesday. The story was first reported by Blood-Horse. The Brad Cox trainee, last seen capturing the GI Breeders’ Cup Distaff to wrap up her Eclipse-winning season, has been shipped to WinStar Farm for a brief respite and is expected to return to training soon in preparation for a potential 4-year-old debut in the GI Ogden Phipps S. June 8.

“Brad moved her from Fair Grounds to Kentucky to go to Churchill, and when she got there she got a little colicky,” Kumin said. “Obviously with a filly like that, we didn’t want to screw around, so we figured we’d just give her a little time. If there are no complications, the plan would be to ship her back to Brad in three weeks.”

Annexing the GII Rachel Alexandra S. and GI Ashland S. to begin her sophomore campaign, the chestnut scored a gutsy triumph in the GI Kentucky Oaks and kept it rolling with victories in the GI Acorn S. and GI Coaching Club American Oaks. She crossed the wire first in the GI Cotillion S., but was disqualified to second before exacting revenge in the Breeders’ Cup. Monomoy Girl was sent to Ocala after that for a full two months off. She returned to the worktab Feb. 17 at Fair Grounds and breezed five times, most recently going five furlongs there in 1:03 flat (18/21) Mar. 23.

“We went to Paul Sharp [Stables] and felt because she had a long campaign and started early, we should just give her 60 days,” Kumin said. “It was the right thing to do, so we gave her the time and she came back to Brad, he galloped her for a while and she had five breezes. We were deciding between the Apple Blossom and the La Troienne and our gut was to run in the second race rather than face Midnight Bisou and Elate second, third off the layoff when we were first off. That was the target as of 10 days ago, but stuff happens.”

Monomoy Girl was briefly considered for a start in the GI Pegasus World Cup after her Breeders’ Cup triumph, but ownership ultimately elected to pass after the intense nature of her 3-year-old campaign. With a much less taxing season expected for her this year, Kumin said a start in the 2020 Pegasus remains a distinct possibility.

“The Breeders’ Cup is 100% our goal for the year, but we talked about the Pegasus last year and we decided to give her time,” he said. “This year, she’ll be starting later, and we wouldn’t give her as much time off since she’ll only run two or three times before the Breeders’ Cup. We’ll have to see and we’ll talk to all the partners.”

Kumin also sounded cautiously optimistic about bringing Monomoy Girl back for a full 5-year-old campaign, while allowing that a lot can happen before then and saying a decision would be made by her entire ownership later on.

“This is a group that really enjoys racing,” he said. “All the partners love racing, so if she’s in good form and wants to run, I would think that this group would consider bringing her back. We’re all racing guys and if the horses are in good condition and want to run, we’ve generally run them in the past.”