Monomoy Girl Arrives at Spendthrift Farm, To Visit Into Mischief Next Year 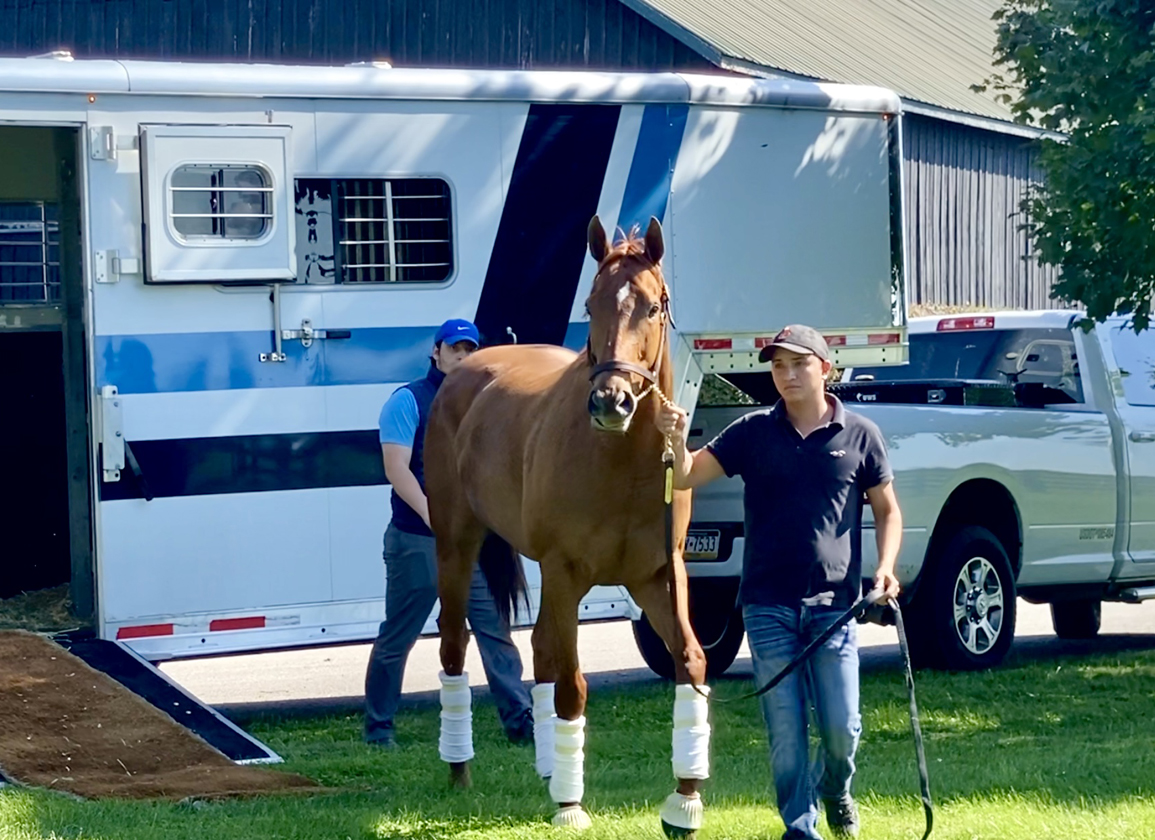 Two-time Breeders' Cup Champion Monomoy Girl (Tapizar–Drumette, by Henny Hughes) arrived at Spendthrift Farm on Monday, shortly after noon, from Churchill Downs, and the farm announced “unofficially” that she will be bred to perennial leading sire Into Mischief in 2022.

The six-year-old mare was retired from racing last week after she was discovered to have sustained an injury during training.

Spendthrift General Manager Ned Toffey was on site for the arrival and spoke on their decision to send her to Into Mischief.

“It's not a tremendous amount of pedigree research there, it's just one of those breed the best to the best-type things,” he said. “She's certainly among the very best and we feel that Into Mischief is too.”

Monomoy Girl took in her surroundings with ease after stepping off the van in Lexington and then strode into the quarantine barn, where she will reside for the next 30 days.

“Having been retired because of a fairly minor injury, we'll go very slowly with the acclimation process here to her becoming a broodmare,” Toffey said. “[She is in] our regular quarantine barn where Beholder was when she first came to Spendthrift. We'll set up a pen that will let her get outside, eat some grass, get some sun on her back and get used to her surroundings. We'll do some hand walking and continue to take things slow with her. After she's acclimated, probably about 30 days, we'll find her a buddy who will likely be another filly just off the track. They'll eventually work their way into our group of barren and maiden mares here.”

Purchased by Liz Crow for $100,000 at the Keeneland September Sale and originally campaigned by the ownership group of Michael Dubb, Sol Kumin's Monomoy Stables, Stuart Grant's The Elkstone Group and Bethlehem Stables, the Brad Cox trainee was sent through the ring at last year's Fasig-Tipton Night of Stars Sale after taking two editions of the GI Breeders' Cup Distaff in 2018 and 2020. She sold for $9.5 million to Spendthrift Farm there, and MyRacehorse Stable and Madaket Stables soon joined in the partnership. This year, she captured the GIII Bayakoa S. and finished second to MGISW Letruska (Super Saver) in the GI Apple Blossom H.

Toffey said the crew at Spendthrift is thrilled to have Monomoy Girl join the likes of another champion in Beholder at Spendthrift.

“It's really exciting to have these kinds of horses here, to have her join Beholder, and eventually Got Stormy (Get Stormy) will be chiming in here pretty soon herself. It's the kind of broodmare band we'd like to have as a really, really top-notch group of mares and hopefully we'll be able to keep daughters out of these two great mares for years to come.”