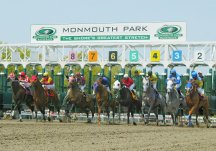 An investigative news story centered on not-for-profit tax documents filed by the New Jersey Thoroughbred Horsemen’s Association, Inc., (NJTHA) has made public a $30-million debt that the NJTHA owes to Darby Development LLC, which is the firm that the horsemen’s group has contracted with to operate Monmouth Park.

The Asbury Park Press broke the exclusive story Monday. A link to the full article is here.

The article also raises the issue of how revenues from recently legalized sports betting will be shared, and what the eventual implications might be in terms of increased purses or a longer race meet.

A Monday voicemail message requesting a comment from Dennis Drazin, the chairman and chief executive of Darby, was not returned prior to deadline for this story.

In interviews earlier this summer, TDN‘s requests to learn more about any sports betting revenue-sharing agreement that might be in the works yielded “no comment” replies from track officials.

“The management agreement between Darby and the non-profit NJTHA is unique among American racetracks; most tracks are owned and self-operated by large gaming companies, without relying on an outside firm,” the article explained. “Still, the head of Darby Development says the company is in no hurry to collect the debt, and a board member of the horsemen’s group says the recent introduction of sports betting at Monmouth Park has the potential to bring a financial rebound.”

The article further noted that according to the NJTHA’s agreement with Darby, “that money is not payable until all obligations due to the [New Jersey Sports and Exposition Authority] including lease payments and $9 million in loans to the NJTHA, are satisfied. The earliest that money could be taken by Darby is 2024.”

The article said that when the track was on target to lose $8 million in 2012 and its ownership was in flux, Drazin, an attorney who was the former counsel to the NJTHA, “stepped down from his post as the chairman of the New Jersey Racing Commission and became an advisor to the horsemen, while Darby was formed to operate the track. Drazin indicated he had to prove his family had $20 million in assets before the Sports and Exposition Authority would lease the track to the horsemen.”

The article quoted John Forbes, president of the NJTHA, as saying that, “Most all of the risk has been taken, quite frankly, by Drazin and his family. They’re the ones on the hook. That’s just a fact.”