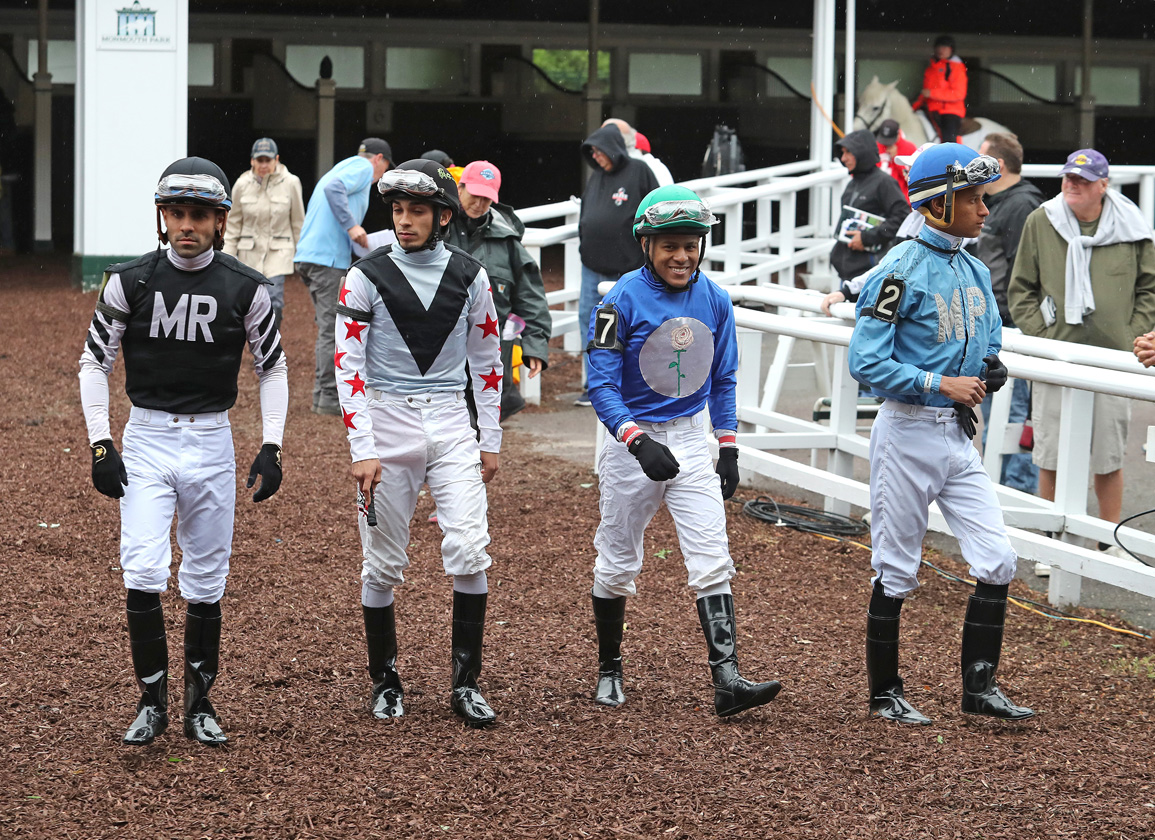 OCEANPORT, NJ-Every year, opening day at Monmouth Park marks the unofficial start of the summer season on the Jersey Shore. This year, it seems, Mother Nature didn't get the memo. Fans on-hand for Friday's card braved temps in the mid-50's and steady rain that intensified as the twilight card wore on. Among the casualties, the day's feature–the Jersey Derby–was taken off the turf, losing a pair of 3-year-olds in the process, however, the show marched on resolutely. At the conclusion of the six-race card, total handle was $1,528,236, while the on-track figure was $125,956. In 2020, Monmouth's opening day, which was delayed until July 3 because of the pandemic, drew total handle of $3,422,830, with $159,350 handled on track.

“I come out for opening day every year,” said a Monmouth regular. “Rain or shine, I'm here. “It's a decent crowd considering the weather. We usually love to go to the picnic area. You can bring family and friends and enjoy a day of racing. It's just a wonderful place.”

Like all other racing venues across the nation, Monmouth eagerly welcomed the new season following a forgettable 2020 largely shaped by the COVID-19 pandemic. Despite the excitement to be back, a major topic of discussion Friday was the recently announced restriction on whip use which was met by mixed reactions from local horsemen.

“It's the elephant in the room,” said trainer Kelly Breen, who won the day's feature with Mr. Amore Stable It's A Gamble (English Channel). “It's not what I envisioned in horse racing.”

Breen, who has been coming to the Jersey oval since 1986, believes the new rule was adopted without including the people it affects the most, the horsemen.

“I truly believe it's changing the whole dynamic of a race. After watching the first couple of races here, I still really don't know what to expect. I'm not sure what the jockey can do. The times and pace for the first two races were slow. I believe the use of the crop changes the way a race is run.”

Coming into this season's meeting, Breen was quick to point out a significant positive–purses. However, he admitted the pace at which the rule was enacted caught many unaware.

“We really have to adapt quickly,” he said. “But I'm learning. I'm trying to adapt like everyone else. That's the best we can do.”

Adding his own insight from a rider's perspective, Jose Ferrer appeared saddened by the latest change in whip rules.

“It's a shame,” he said. “I feel we can't really communicate with the horse as well.”

He continued, “Many people are still confused about the whip. They think it's a big piece of metal, and it hurts the animal. It's made out of rubber and it's cushioned inside. It's not like it was back in the day. It's plastic. They don't realize we spend every day and night with these animals. We love them, why would we want to hurt them?”

Ferrer was one of several jockeys who didn't carry a whip at all in any of the races Friday.

“I have been riding with the whip for 37 years, I'm worried I am going to get fired up and give them that wake-up call, like I am used to doing all these years,” he said. “But that wake-up call will cost me a suspension and a fine–$500 and a five-day suspension. The fine is harsh. It's so new for us, so we just have to get used to it. I don't want to risk making a mistake.”

Hall of Fame jockey Julie Krone, who serves as an assistant to Phil Antonacci, offered a different perspective to the new whip rule facing her contemporary colleagues.

“It is nice to see the racing at Monmouth go so smooth and safe,” she said. “Jockeys look so focused and strong riding with their beautiful hand rides.”

“I'm always happy to be back at Monmouth Park, and the lessening of the COVID restrictions should make for a good season,” he said. “The major controversy that everyone is talking about is the new whip rule. Every State has a whip rule, it's just our racing commissioner just happened to come up with the strictest whip rule. Having spoken to many of the jockeys before we even took entries, most of them said they'll give it a try, and if they have a problem, I'm sure the Racing Commission and the horsemen will be willing to sit down and talk about it. The first few races looked good finishing, so we just have to see how it progresses.”

“The morning of entries, I was with Jose Ferrer and a bunch of other jockeys and we spoke to the Stewards,” he continued. “They laid out what would be acceptable. They said they wouldn't just slap a fine on them and would talk to them after a race to see why they used a whip if it comes to that. It looks like everyone is working together to see how this is going to work out.”

And while most were happy to return to the seaside oval following a tough year, one face was noticeably missing from this season's new season at Monmouth.

“John Forbes was such fixture at Monmouth,” McBurney admitted. “Especially for me, I'm used to just picking up the phone and talking to him and bouncing ideas off of him. If I had a problem with a racehorse or with an owner, without having him to talk about it has been a little bit difficult. He's very missed.”

However, despite all the recent changes causing a stir at the moment, the things that brings the fans back season after season remains unchanged.

“I love everything about Monmouth, the architecture, the feel of it,” summed up a Monmouth racegoer. “The feeling you get when you walk in the gates. That sense of excitement is palpable. It's just a great get together.”