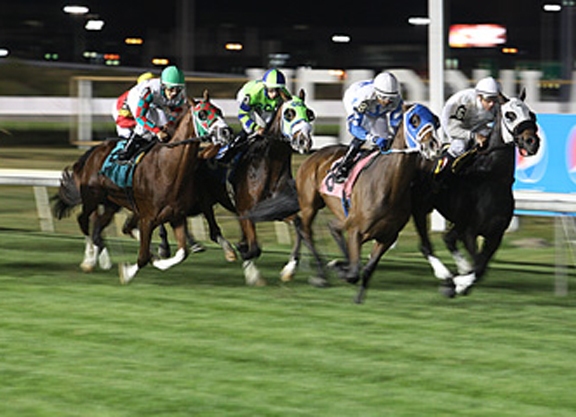 The “Monmouth Park at the Meadowlands” all-turf Thoroughbred meet, which runs for 14 dates from Sept. 28 through Oct. 19, will offer an across-the-board takeout rate of 15%–the lowest in the nation–Monmouth Park announced Wednesday.

“While other tracks have offered lower takeouts on specific bets, we are going across the board on all wagers,” said Dennis Drazin, advisor to Darby Development LLC, operators of the Monmouth and Meadowlands meets. “You hear over and over again that fans want big fields, low takeout, competitive racing and that's what we are set to offer.”

“Our goal is to not only reward those that have followed the all-turf Meadowlands programs the last several years, but to bring new faces to the facility and our simulcast markets,” Drazin continued. “This is an interesting experiment and one that we hope proves popular with the fans and continues to build on the Meadowlands Thoroughbred momentum.”

The New Jersey Racing Commission granted approval to the adjusted takeout Sept. 14. The new rate replaces the previous takeout rates which were: 17% for win, place and show wagers; 19% for exactas and daily doubles; 20% for the Jersey Six; 25% for pick threes, trifectas and superfectas; and 15% for the pick four and pick five.