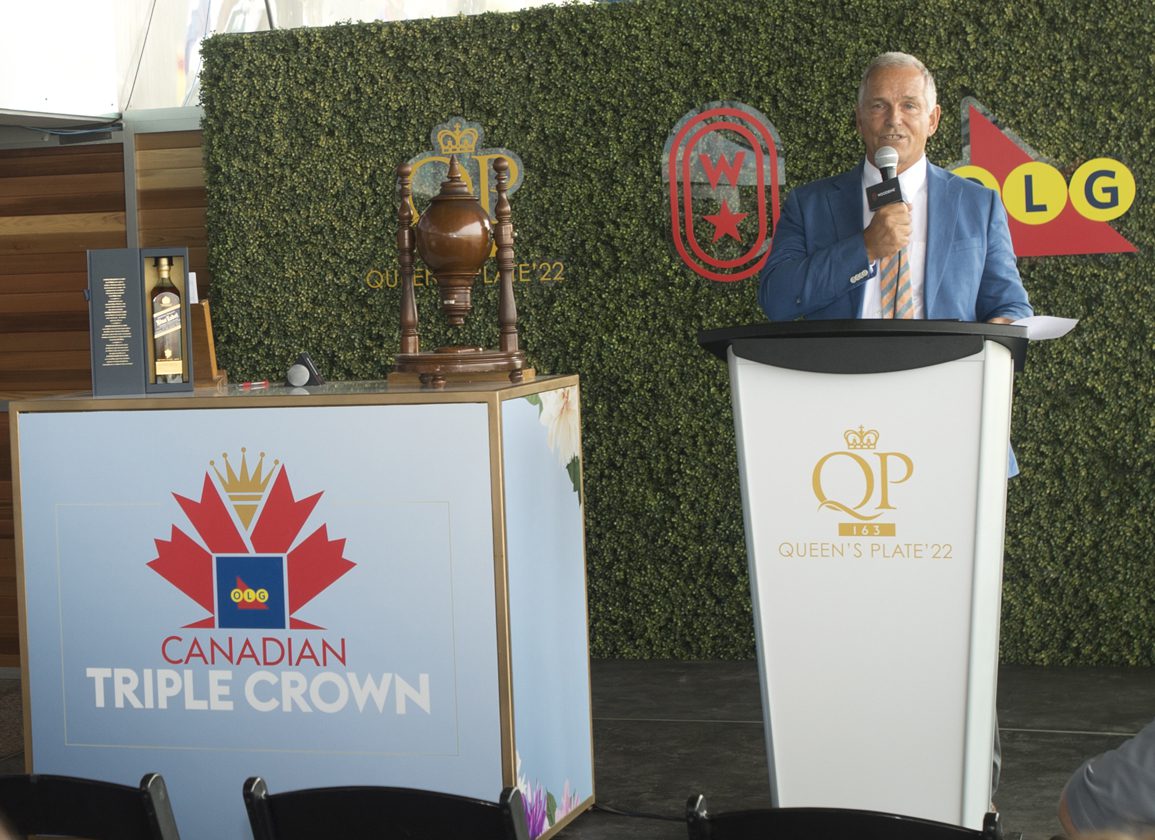 X-Men Racing, Madaket Stables LLC, and SF Racing LLC's Moira (Ghostzapper) was listed as the 5-2 morning-line favorite during Wednesday morning's post position Queen's Plate draw, held at Woodbine's newly-opened Stella Artois Terrace. In addition to the Woodbine Oaks winner, who will exit gate 8 with regular pilot Rafael Hernandez aboard, a total of 10 colts have signed on for Sunday's $1-million 10-furlong Classic, the first jewel in the Canadian Triple Crown.

“Typically, when you win the Oaks, depending on how impressive they are doing it, you always have to think of The Queen's Plate,” said trainer Kevin Attard, who is looking for his first Plate win. “It's something we have always had in the back of our minds, and we geared her campaign so the Plate would be her third race of the season and she'd be fresh.”

The double-draw format was in place for the session, with the order of selection first established beforee allowing the connections to choose their post positions.

“He's not overly large in stature, but he's stout,” said Vassilieva. “He has a stout, muscular body and a big heart. He loves to sleep. Every day, around 10:30 or 11, he eats his breakfast and then goes to sleep. You will find him around that time, every day, sprawled out in his stall. Which is always a good sign to me, that he knows how to rest and relax.”

No stranger to the Queen's Plate, trainer Mark Casse, who won the Plate with Lexie Lou (2014) and Wonder Gadot (2018), will be represented by Heste Sport Inc.'s Sir for Sure (Sligo Bay {Ire}), who will break from post 10 as well as Gary Barber, Wachtel Stables, Peter Deutsch, and Leonard Schleifer's Hall of Dreams (Lemon Drop Kid), who breaks from the rail. The stablemates finished 1-2 in the Plate Trial July 24.

“The Plate Trial was actually my second choice,” said the dual Hall of Fame conditioner of the likely more fancied of the two Casse runners come raceday. “Two days before the Plate Trial, there was an Ontario-sired allowance going a mile and a quarter, and I was trying to find the easiest path to The Queen's Plate because he's a little behind from the injury. But the race didn't go. [Owner] René [Hunderup] was good with running him in the Plate Trial, so we did. I didn't need him to win, I just needed him to show he still wanted to play the game. I thought it was powerful and he got a great ride from [jockey] Declan [Carroll].”

Always a dominant force south of the border, Hall of Fame trainer Todd Pletcher will try to add a second Plate victory with Chiefwood Stables' Causin' Mayhem (Into Mischief), who broke his maiden at Belmont before finishing third last out in the Plate Trial. Pletcher previously won with Archers Bay in 1998.