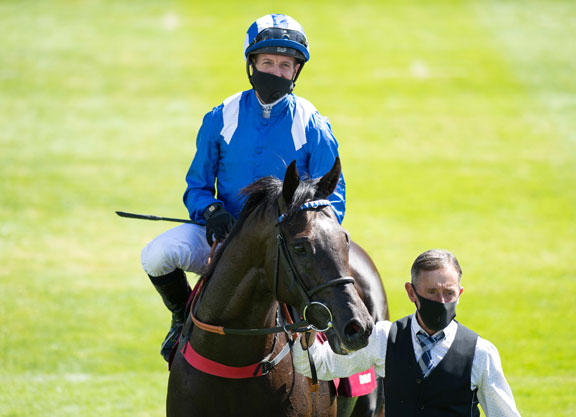 Mohaather (GB) (Showcasing {GB}-Roodeye {GB}, by Inchinor {GB}), a group winner at two, three and four who earned his first Group 1 victory last out in the Sussex S., has been retired to stud due to bone bruising in his near hind fetlock joint.

“Towards the end of last week it was noticed that Mohaather was not moving as well as he had been immediately after the Sussex S.,” said Angus Gold, racing manager to owner Sheikh Hamdan. “Precautionary x-rays were taken over the weekend which have revealed significant bone bruising in his near hind fetlock joint. Unfortunately this will put paid to the rest of his campaign, and as a result Sheikh Hamdan has taken the decision to retire the colt to stud.

“Mohaather won group races as a 2-, 3- and 4-year-old and reserved his best effort for his last outing, where he beat the winners of this year's English and Irish 2000 Guineas, together with dual Group 1 Royal Ascot winner Circus Maximus, quickening from an impossible position inside the last two furlongs in the manner of a top-class miler. While it is sad that he will not get the chance to take on the best of the milers in the Queen Elizabeth II at Ascot and the Breeders' Cup at the end of this year, he retires at the top of his game, and on behalf of HH Sheikh Hamdan Al Maktoum I would like to thank Marcus Tregoning and his team for the outstanding job they did with him.”

Bred by Gaie Johnson Houghton, Mohaather was bought by Shadwell for 110,000gns during Book 2 of the Tattersalls October Yearling Sale in 2017. Sent to Marcus Tregoning, he was spotted three times at two, winning twice including the G3 Horris Hill S. He showed promise on debut at three with a victory in the G3 Greenham S., but was not seen again until running fifth in the Queen Elizabeth II S. on Champions Day. Seventh behind Circus Maximus (Ire) (Galileo {Ire}) in the G1 Queen Anne S. at Royal Ascot first up this year, he then took the G2 Summer Mile by 3 3/4 lengths prior to the Sussex.

Mohaather is a full-brother to Prize Exhibit (GB), winner of four graded stakes in the U.S., and is a half to the dam of Johnson Houghton's G1 Queen Anne S. winner Accidental Agent (GB) (Delegator {GB}).