Mogul on Song For Sheema Classic 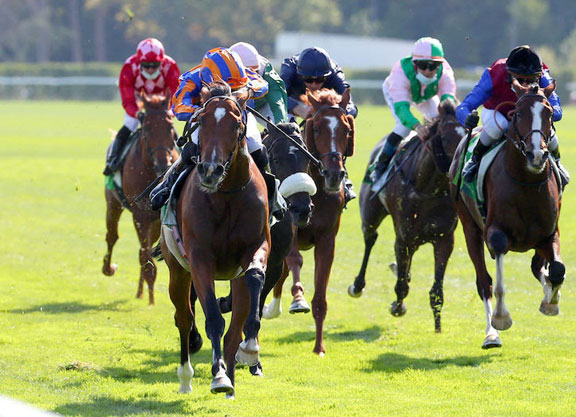 Mogul (GB) (Galileo {Ire}) is in good form ahead of a start in the $5-million G1 Dubai Sheema Classic at Meydan on Mar. 27. Last seen in action taking the G1 Longines Hong Kong Vase at Sha Tin in December, the Coolmore partners-owned 4-year-old also saluted in the 2020 G3 Gordon S. at Goodwood in July, ran second in the Aug. 19 Great Voltigeur S. and returned to the winner's circle in the G1 Juddmonte Grand Prix de Paris at ParisLongchamp in September. Fifth in the GI Longines Breeders' Cup Turf a month prior to his Hong Kong triumph, the 3.4-million gns Tattersalls October Book 1 yearling will fly to Dubai on Monday and step out for morning trackwork after clearing 48 hours of quarantine on Thursday.

“We're happy with everything he's done,” trainer Aidan O'Brien, who won the race with the late St Nicholas Abbey (Ire) (Montjeu {Ire}) in 2013, told the Tamarkuz Media notes team. “He had a little break after Hong Kong and then he got going again and seems to be in good form. He's a horse who takes his racing very well and we think he's ready to start back again.

“I suppose it is his first run of the season, but he ran in December and that's hopefully an advantage. He wouldn't have had as long a break as he would have had last year, so we're hoping he's well enough and fit enough to do himself justice, really.”

Comparing Mogul and his year-older full-brother Japan (GB) (Galileo {Ire}) who won the 2019 G1 Grand Prix de Paris and G1 Juddmonte International S., O'Brien added, “Mentally they're a bit the same, but physically they're different. Mogul is probably a stronger, more powerful type of horse than Japan. Japan looks like a mile and a quarter, mile and a half horse, physically, whereas this horse looks more like a sprinter-miler. They're relaxed horses who sleep and eat well.

“He's a big, strong, powerful horse and there's a lot of Danehill in him, so he [Japan] carries plenty of condition. Even though he is fit and has done plenty of work, he still looks round and strong and looks more like a horse who will improve with the run, but that's the way he always looks.

“The quicker the ground the better. The flat track will suit him and a nice even pace will suit him. He likes to take his time and he comes home well. He's flying out on Monday and we will be on the track as soon as we can.”