King Of Queens: Repole Gets a 1-2 Belmont Stakes Finish with Mo Donegal and Nest 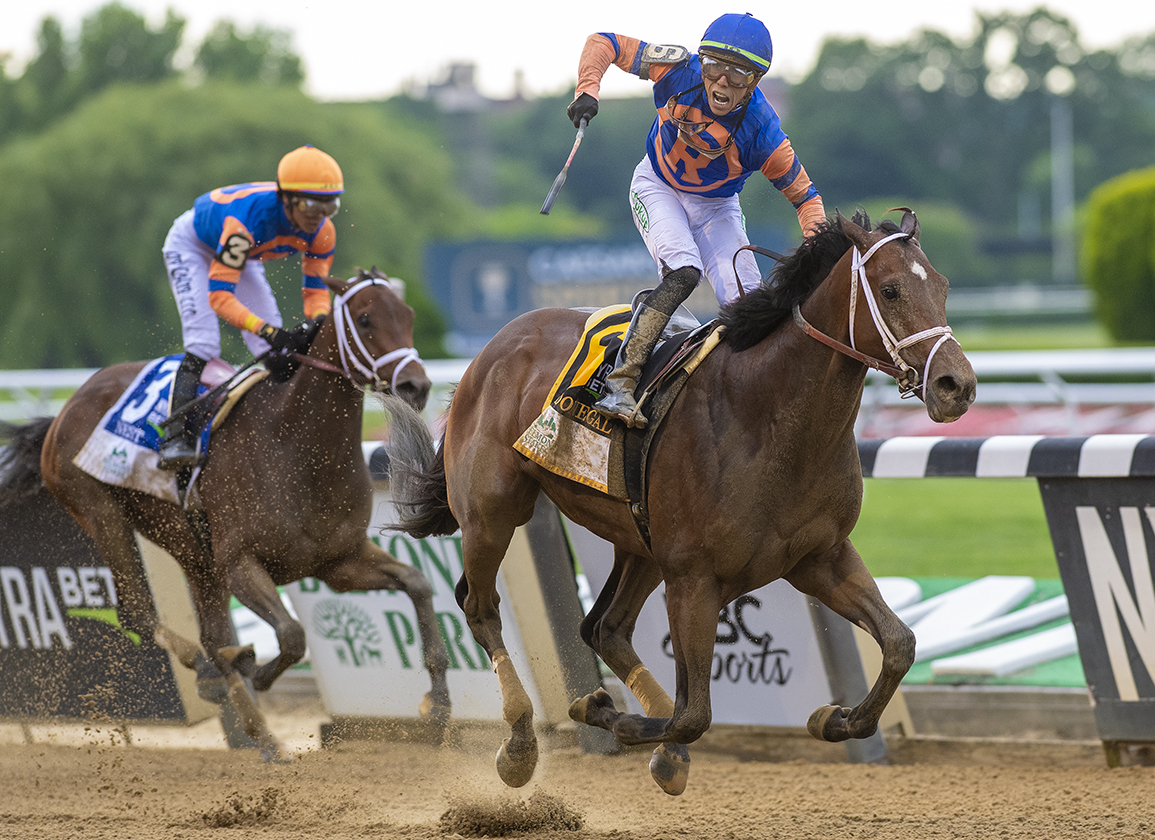 ELMONT, NY – The kid from Queens got his GI Belmont Stakes.

Carrying the royal blue-and-orange, New York Mets-inspired silks of Middle Village native Mike Repole, Donegal Racing and Repole Stable's Mo Donegal (Uncle Mo) delivered an authoritative, three-length victory as the 5-2 favorite before an announced crowd of 46,103 in Saturday's GI Belmont Stakes. It was the fourth victory in the third leg of the Triple Crown for Hall of Fame trainer Todd Pletcher.

The filly Nest (Curlin), also campaigned in partnership by the co-founder of Glaceau and trained by Pletcher, was a valiant second after stumbling at the start. Ashview Farm and Colts Neck Stables co-bred both of the top two finishers.

“It's a 40-year dream,” said Repole, who came within three- quarters-of-a-length of upsetting the 2011 Belmont with Stay Thirsty. “Coming to this track and Aqueduct, being a kid from New York, this is New York's race. In 2011, I came in second with Stay Thirsty and I watched the replay 150 times. I will no longer watch that replay. Getting a first and second here, it makes up for it. This was the biggest goal of my racing life, and I just accomplished it and I ran one-two.”

Repole continued, “I used to cut out of school and it made me an entrepreneur. I used to bet $20 and that's a lot of pressure when you had to pay back your parents. I'm always going to be Mike from Queens. This is New York's biggest race and to win it here, with my family and friends and 70 people here, this will be a big winner's circle. Trained by Todd Pletcher, who is such a great friend, and with Jerry Crawford and Donegal Racing; success is best when shared.”

Repole concluded, “For my silks, for a horse named 'Mo,' by Uncle Mo, it's pretty special.”

Mo Donegal raced in between rivals in sixth as GIII Peter Pan S. winner 'TDN Rising Star' We the People (Constitution) showed the way around the clubhouse turn through an opening quarter in :23.99 over the fast going in the 1 1/2-mile Classic. Irad Ortiz, Jr., aboard 2016 Belmont winner Creator (Tapit), had Mo Donegal well within striking distance in fifth with positions unchanged as We the People led GI Preakness S. fifth Skippylongstocking and GI Kentucky Oaks runner-up Nest following a half-mile in :48.49.

Traveling nicely heading into the far turn, Mo Donegal made his move while four wide leaving the quarter pole and rolled by the top two three-sixteenths from home. With Ortiz, Jr. staying busy down the stretch, Mo Donegal was never seriously threatened by his stablemate while wandering some down the center late. Jose Ortiz, aboard the runner-up, congratulated his older brother as the two enjoyed a nice moment celebrating together past the wire.

“I'm delighted, obviously, with the outcome,” Pletcher said. “It's our family's favorite race. Our kids grew up here and went to school here and we've always felt like it's our hometown race. When we're fortunate enough to win it, it adds some specialness to it. That hometown feel. That part of it is really cool. Also, just the mile-and-a-half challenge is something we've been fortunate enough to do well at. It's the 'Test of the Champion,' so to be fortunate enough to win it four times and with some five, six seconds with some pretty nasty beats, too, is very special. It's been fun.”

Repole came on board to join the ownership group in late April, purchasing an undisclosed interest in Mo Donegal ahead of his better-than-it-looked, fifth-place finish with an impossible trip in the Kentucky Derby. Mo Donegal is the first horse to register the Wood Memorial-Belmont double since Empire Maker in 2003.

“I want to thank all the partners for Donegal Racing,” Jerry Crawford of Donegal Racing said. “They've believed and today they've been rewarded. I think this victory today shows that the sport is more accessible than they may realize. I can't say enough for Todd Pletcher and Irad Ortiz, Jr. for the great job they've done with this horse. We were a little confident going into this race today and when he turned for home, I said 'forget about it.' I knew Todd thought he could get a strong last quarter mile, and he surely did.”

Mo Donegal, a $250,000 KEESEP yearling, is the 11th Grade I winner for Ashford Stud's leading sire Uncle Mo. Repole and Pletcher, of course, teamed up to campaign the champion 2-year-old colt of 2010, led by a memorable win in the GI Breeders' Cup Juvenile at Churchill Downs. This is the seventh Grade I winner for broodmare sire Pulpit. Mo Donegal's dam Callingmissbrown (Pulpit), a two-time winner for breeder My Meadowview LLC, is a daughter of GI Acorn S. victress and GI Kentucky Oaks runner-up Island Sand (Tabasco Cat). Mo Donegal is her second foal and her only produce since is the unraced juvenile filly named Prank (Into Mischief), who brought $500,000 from Alex Solis II and Jason Litt at KEESEP. This is also the family of Queen's Plate hero Niigon (Unbridled).