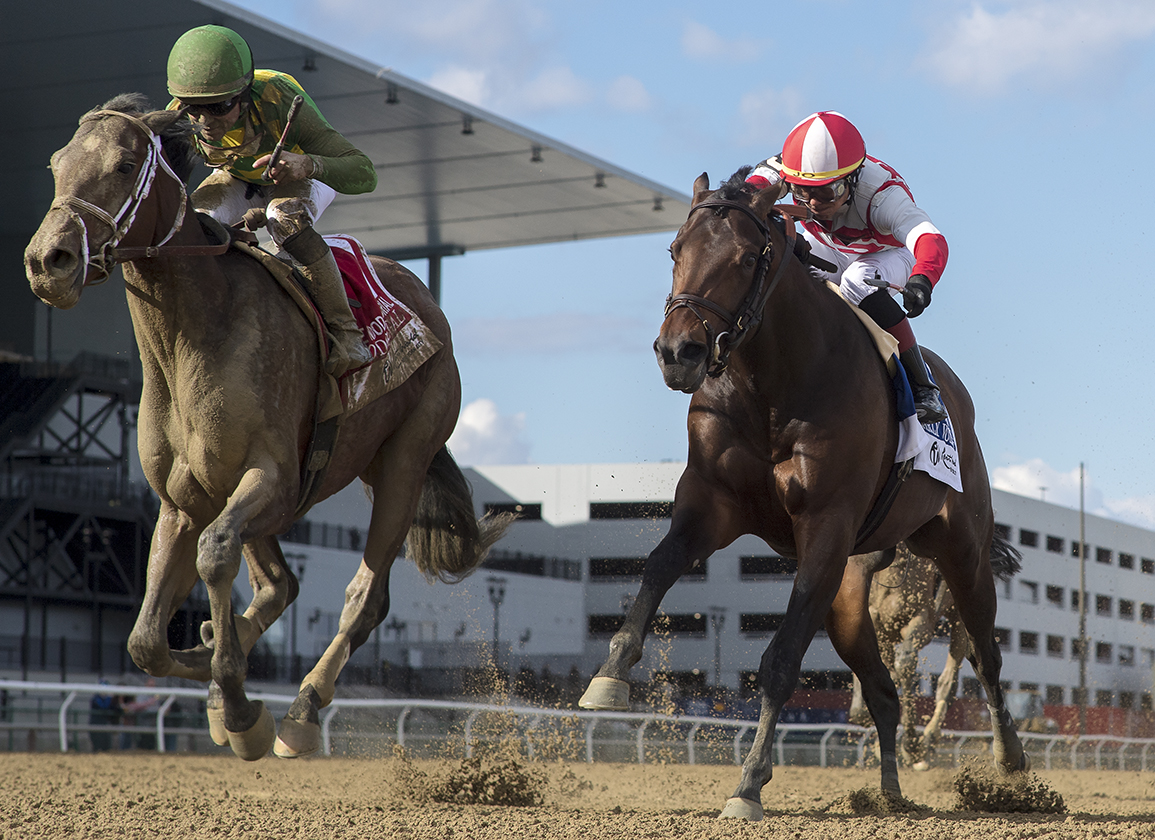 Mo Donegal (Uncle Mo) returned to the scene of his previous career best score to stamp his ticket to the Run for the Roses with a late-rallying score over Early Voting (Gun Runner) in the GII Wood Memorial S. at Aqueduct Saturday. It was the seventh Wood Memorial victory for Hall of Famer Todd Pletcher, tying Sunny Jim Fitzsimmons record. His previous winners were Eskendereya (2010), Gemologist (2012), Verrazano (2013), Outwork (2016), Vino Rosso (2018) and Bourbonic (2021). Verrazano went on to win the GI Haskell Invitational and Vino Rosso took the GI Breeders' Cup Classic, but the last Wood Memorial placer to take home the roses was 2003 victor Funny Cide.

Mo Donegal was off a breath slow, but not nearly as slow as race favorite Morello (Classic Empire), who typically runs near the front, but was relegated to last early with Mo Donegal just ahead of him on the fence. It was Early Voting in control and he clocked an opening quarter in :23.86 with 49-1 shot A. P.'s Secret (Cupid) tracking from second. The Klaravich colorbearer put up a half-mile in :47.75 as Mo Donegal continued to bide his time near the back.

Picking it up on the backstretch to be fifth as three-quarters went in 1:11.59, the 2-1 second-choice cut the corner to be a joint second at the top of the stretch with the pacesetter well within reach. Early Voting found more in the lane and tried to go on with it, putting some distance between himself and Mo Donegal. However, the GII Remsen S. winner was just finding his best stride under Joel Rosario and tugged his way past Early Voting in the final strides to win by a neck. Skippylongstocking (Exaggerator) completed the trifecta) and favored GIII Gotham S. winner Morello could only manage sixth after his poor start. Gaining 100 points for the victory, Mo Donegal moves into fourth on the GI Kentucky Derby leaderboard with 112 points total.

“I thought he ran a great race,” said Pletcher, who won the GI Central Bank Ashland S. Friday with Nest (Curlin). “It didn't really unfold the way we thought it would. When Steve [Asmussen]'s horse [Morello], didn't get away well, I was worried the fractions were a little soft, but he was able to overcome that and come with a big run. I think he got his last quarter-mile in :23.69, which is pretty impressive. He was resolute. He kept coming and I was thrilled to see him get there.”

As for the Kentucky Derby, Pletcher said, “You need a good trip in the Derby and with his running style, he's going to have to work his way through some traffic. But I think he's got some good experience and he showed today he can overcome a bit of a trip and zigzag when he needs to. Most importantly, it looks like he has the stamina to see out the trip.”

“It was a perfect trip,” said Rosario. “He kept digging in at the end and kept coming. It was a good race. I tried to save ground and it looked like the track was good inside, so I tried to stay there for as long as I could. He was handling everything well.”

“I thought he was on wings,” said Jerry Crawford of owner Donegal Racing. “I think the performance he gave today was even better than it looked to the naked eye. I've been here all day [Friday] and [Saturday] and not one horse has closed on the dirt in two days and he came from far back. So, he had to be not just the best today, he had to be much-the-best to prevail.”

As for runner-up Early Voting, trainer Chad Brown said, “He ran a great race. He was second-best today. He got a great ride and the winner ran a really good race as well. I was very proud of the horse.”

He continued, “I have to digest this and look at what happens everywhere today [before deciding on the Derby]. Also, first and foremost look at the horse and put everything together to see if he'd have a reasonable chance to win the race. Based on his limited experience and such, I'm not sure, but let's see. He has the points, so probably. I don't want to make a decision until I evaluate everything.”

Third when unveiled in a 6 1/2-panel event at Belmont Sept. 30, Mo Donegal showed his appreciation for more real estate with a late-running graduation going 1 1/16 miles at that oval Oct. 21. Getting his nose down ahead of Saturday's GI Toyota Blue Grass S. winner Zandon (Upstart) in the track-and-trip GII Remsen S. Dec. 4, he made a late run for third behind last week's GI Curlin Florida Derby victor White Abarrio (Race Day) on a track that is not kind to closers in Gulfstream's GIII Holy Bull S. Feb. 5. He was scratched from the GII Fasig-Tipton Fountain of Youth S. last month with a fever and re-routed to this event.

Mo Donegal is one of 43 graded winners for Uncle Mo and his second Wood Memorial winner following the Pletcher-trained Outwork form the Coolmore stallion's first crop. He was also the second graded winner for Uncle Mo Saturday, who was represented by GII Shakertown S. winner Golden Pal at Keeneland. His dam Callingmissbrown (Pulpit) is a daughter of GI Acorn S. victress Island Sand (Tabasco Cat). Mo Donegal is her second foal and her only produce since is a juvenile filly named Prank (Into Mischief), who brought $500,000 Alex Solis & Jason Litt at KEESEP. Callingmissbrown was barren when bred to Catholic Boy for 2021 and is expecting a foal by Curlin.