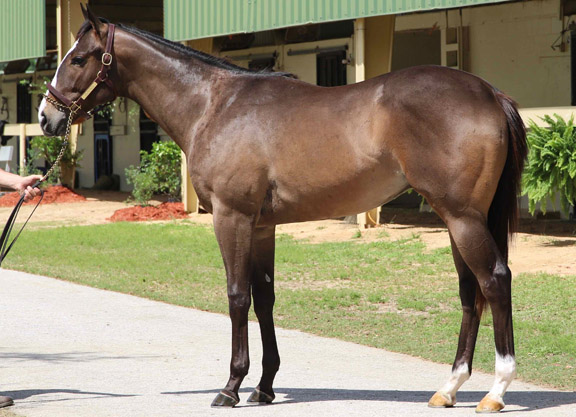 A total of 646 horses of all ages have been cataloged for the Ocala Breeders' Sales Company's Winter Mixed Sale, which kicks off a two-day run in Central Florida Tuesday morning. The sale begins at 11 a.m. ET with a consignor preferred session (hip 1-186) to be immediately followed by the horses of racing age section (hip 201-351). The balance of the horses (hip 401-710) will be offered during the sale's open session Wednesday morning at 11 a.m.

“We've had a chance to go around and look at the horses and there are some awfully nice horses in the sale,” said OBS Director of Sales Tod Wojciechowski. “There have been no significant changes in world landscape really in terms of economics. Our breeze show went off great Monday, the weather has been excellent and we are looking for a good sale.

He continued, “I think one thing about the timing is that having the Eclipse Awards on Thursday prior to the sale means that we might get some people we otherwise might not have seen. Maybe they make the drive up to see their horses and it's really a fortuitous time to conduct a sale.”

The under-tack preview was held Monday morning over the nearby SafeTrack surface and a trio of 3-year-olds shared the bullet, stopping the clock in :32 3/5 for three furlongs:

“While our horses-of-racing-age section isn't new, the breeze show is something unique to us,” said Wojciechowski. “It's an added piece of the puzzle to help our buyers make their decisions.”

But Florida-based stallions are always an integral component of any OBS sale and this event is no exception.

“Florida has always been something of a proving ground for stallions and the buying public is well aware of that fact,” Wojciechowski said.

Khozan (Distorted Humor) made an enormous impression with his first crop of runners in 2019 and is the sire of 11 youngsters in the catalog, five of which are newly turned yearlings. The Journeyman inmate is also represented by eight in-foal mares, while horses like Kantharos's well-received son Bucchero (seven mares) and GISW Girvin (Tale of the Cat, nine mares) represent the Sunshine State's young guns with their first mares in foal.

A then 3-year-old colt by Goldencents topped last year's Winter Mixed Sale on a bid of $200,000. Now named Golden Notion, the bay hit the board in each of his three starts last season and is back in steady training with Brad Cox at Oaklawn. Golden Notion worked a half-mile in a bullet :47.80 (1/101) in the Hot Springs mud Jan. 26.

For the catalog and additional information, visit www.obssales.com.