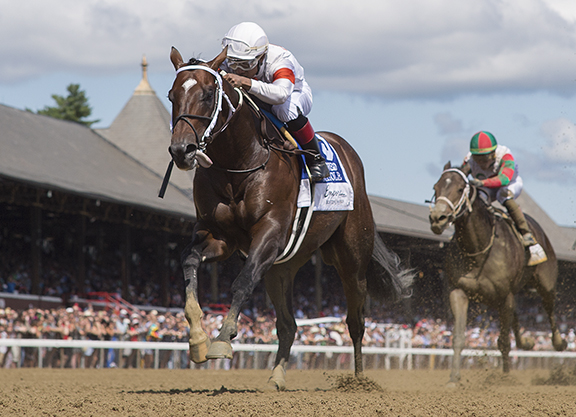 SARATOGA SPRINGS, N.Y.–After suffering his first loss of the season in his last trip around the Saratoga oval in the GI Alfred G. Vanderbilt S July 27, Mitole (Eskendereya) was out for revenge Saturday and he certainly got it with another good-looking score in the GI Forego S. Favored at 4-5, the bay broke on top and was soon joined by 3-2 second-choice Promises Fulfilled (Shackleford), winner of the GI H. Allen Jerkens Memorial S. at this oval last term. The top two betting knocked heads a bit with Promises Fulfilled gaining a slight advantage as the first quarter went up in :23.05. Mitole stuck his head in front entering the far turn and the race was all over from there. Promises Fulfilled folded his tent and Mitole cruised clear to win as he pleased in a new stakes record time of 1:20.80. Grade I winner Firenze Fire (Poseidon's Warrior) got up for second and 32-1 shot Killybegs Captain (Mizzen Mast) checked in third.

“I think the circumstances for the Vanderbilt just didn't suit him; coming off the huge run in the Met Mile and cutting back to three-quarters,” winning trainer Steve Asmussen said. “But he came out of the race in good shape, trained beautifully for this, and the results speak for themselves. Just like going into the Churchill Downs handicap and the Met Mile, Ricardo [Santana, Jr.] knows the horse, lets him be himself, and the best version of Mitole usually takes care of itself.”

The Hall of Famer continued, “I think that this was very significant coming off the loss in the Vanderbilt. We'll speak with the Heiligbrodt and see how he comes out of the race and see how he trains. Obviously, we'll try to align ourselves for the Breeders' Cup.”

“Today he broke sharp and put himself in a position where he wanted to be,” said Santana. “He's a really nice horse to ride, and he does everything right.”

Mitole burst onto the scene at Oaklawn last winter, winning three of his four starts there, including the Bachelor S., by a combined 26 lengths. Following another romping effort in the Chick Lang S. last May, he was shelved for the season and returned to action in Hot Springs Mar. 2 with another decisive score. Following suit with a win in the GIII Count Fleet Sprint H. in the slop at Oaklawn Apr. 13, the bay registered his first win at the highest level in the GI Churchill Downs S. May 4. Scoring a gritty win over next out GI Whitney S. victor McKinzie (Street Sense) in a salty renewal of the GI Met Mile June 8, Mitole suffered his first loss of the season when third to repeat winner Imperial Hint (Imperialism) in Saratoga's GI Alfred G. Vanderbilt S. last out July 27.

Mitole is one of two Grade I winners for his sire Eskendereya, following GI Met Mile and GI Los Alamitos Futurity S. victor Mor Spirit. They are also two of the four graded winners for their sire with the others being of the fairer sex, Eskenformoney and Isabella Sings. The late Edward Cox, Jr., bred and raced Mitole's dam Indian Miss, who never found the winner's circle. The bay colt is her second foal and she has since produced the unraced 3-year-old Tipperary Jack (Violence), a juvenile filly by Creative Cause and a yearling filly by Oxbow. WinStar purchased the half-sister to GSW Live Lively (Medaglia d'Oro) for $240,000 carrying a foal by Into Mischief at the 2018 Keeneland November Sale as part of the Cox dispersal. The 10-year-old mare produced an Into Mischief filly May 26.