Mischevious Alex Dominates In the Carter 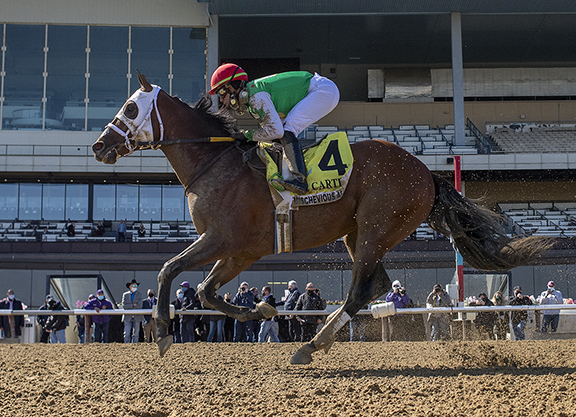 Mischevious Alex (Into Mischief) took his 2021 record to a perfect three-for-three and scored a career high Saturday in Aqueduct's GI Carter H. Breaking sharply alongside the fleet-footed Chateau (Flat Out), the 4-5 chalk allowed his foe to dictate terms, sitting two lengths back in second as Chateau clocked a :23.09 first quarter and :45.89 half-mile. Chateau turned for home in front, but Mischevious Alex was just winding up. The bay inhaled the pacesetter by mid-stretch and rolled clear with ease under a hand ride from Irad Ortiz to win by 5 1/2 lengths. Mind Control (Stay Thirsty) got up for second and Souper Stonehenge (Speightstown) was third with Chateau fading to be fourth out of five. It was the second graded win on the card for both Ortiz and trainer Saffie Joseph.

“I was a little concerned early in the race,” Joseph said. “He was a little far back and I know the track has been heavy and I didn't know if he could make up that much ground. Obviously, he was giving Irad some feel and he rode him with a ton of confidence. He ran well, but I didn't expect him to win a Grade I as easy as he did. I have a lot of respect for the competition.”

As for what's next, Joseph said, “[Part-owner] Chuck [Zacney] has always wanted to go to the [GI] Met Mile because we want to make him [Mischevious Alex] a stallion. Winning a Grade I today takes a lot of pressure off. In my opinion, he wants to sprint six or seven furlongs. Can he get a mile? Yes, against the right company. But it all depends on who shows up. The Met Mile is definitely under consideration and then the two Grade Is at Saratoga [Forego and Vanderbilt]. Hopefully, he comes out of it good and then we'll make a game plan.”

“He came to Saffie's barn in December and he took it from there,” Zacney said. “This was always our goal. We felt this horse deserved a Grade I. That's what we were shooting for, and now he has it.”

Romping by seven lengths in Gulfstream's GIII Swale S. in February of last year, Mischevious Alex followed suit with a facile score in Aqueduct's GIII Gotham S. a month later. With COVID-19 halting racing in much of the country, he did not make his next start until June 20, finishing fourth in Belmont's GI Woody Stephens S. Sixth next out in the GI H. Allen Jerkens S. at Saratoga Aug. 1, the $75,000 KEESEP buy was subsequently shelved for the season and transferred from John Servis to Joseph in the interim. Kicking off 2021 with a decisive optional claimer score at Gulfstream Jan. 10, Mischevious Alex captured the GIII Gulfstream Park Sprint S. last time Feb. 13.

Mischevious Alex is the ninth Grade I winner by leading sire Into Mischief and is also one of 39 graded winners and 92 black-type scorers by the red-hot stallion. He is also the fourth Grade I winner out of a daughter of Speightstown and one of 11 graded winners and 30 black-type victors out of mares by that WinStar stalwart. The winner is bred on the same Into Mischief/Speightstown cross as MGISW Mia Mischief and MGSW & MGISP Engage. His dam White Pants Night is a half-sister to GSW Hebbronville (Majesticperfection); MSW & GSP Master of Disaster (Dance Master) and SW A Day For Dancing (Dance Master). Mischevious Alex was her second foal and she has since produced the 3-year-old gelding Great Gasby (Tiznow); a juvenile colt by Outwork; and a yearling colt by Wicked Strong. White Pants Night was bred back to Audible last season.