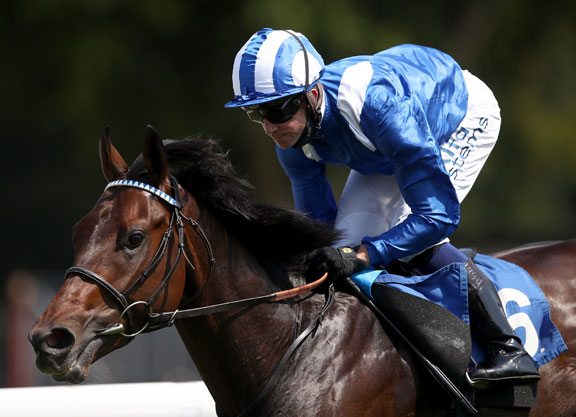 G1 Haydock Sprint Cup winner Minzaal (Ire) (Mehmas {Ire}) has joined the Shadwell stallion roster at Derrinstown Stud in Ireland. The Shadwell team of stallions for 2023 also includes the world's best turf horse of this year, Baaeed (GB), who will be based in England at Nunnery Stud.

Trained by Owen Burrows, Minzaal won the G2 Gimcrack S. at two before going on to win at the highest level this season at Haydock, in what would transpire to be his final racecourse appearance. In total, he won four of his 11 starts across three seasons, earning £473,938 in prize-money.

Minzaal, from the first crop of Tally-Ho Stud's promising young sire Mehmas, was bred by Derek and Gay Veitch at Ringfort Stud from the unraced Clodovil (Ire) mare Pardoven (Ire) and was purchased by Shadwell as a yearling for 140,000gns.

Shadwell principal Sheikha Hissa said, “Minzaal has been an outstanding sprinter for our operation for the past three years. I believe Owen, Jim [Crowley] and I agree that we have never met a sprinter with such a remarkable temperament, and I hope his progeny in the future will reflect the qualities we have seen and admired in Minzaal. I would like to thank everyone at Owen's, Shadwell, and Derrinstown for their expertise in training and taking care of Minzaal. I would also like to thank Ringfort Stud for breeding an excellent colt that we took a great deal of pleasure in racing – and now proudly stand as a stallion in our operation.”

Along with his two victories as a juvenile, Minzaal was third in the G1 Juddmonte Middle Park S., and filled that same spot the following year in the G1 QIPCO British Champions Sprint. Further stakes placings came his way at four, in the G2 Clipper Logistics York S. When third behind subsequent treble Group 1 winner Highfield Princess (Fr), before finishing second to that top-class mare in the G1 Prix Maurice de Gheest. Minzaal was found to be lame after his Sprint Cup victory, and when x-rays revealed a fractured knee he was retired the following day.

Shadwell's European bloodstock manager Stephen Collins said, “Minzaal ticks all the boxes for the commercial breeder. He was a speedy, precocious two-year-old who developed into a Group 1-winning four-year-old. He was also Group-1 placed, aged two, three and four. He is Mehmas's top-rated racehorse in his first three crops of racing age but more importantly he is currently the top-rated sprinter in Europe with an official BHA rating of 121. A versatile, good-looking colt with a wonderful temperament who acted in all ground conditions, he is a great addition to the Shadwell stallion roster.”

Owen Burrows, who also trained G1 Coronation Cup winner Hukum (Ire) for the Shadwell team this season, paid his own tribute to Minzaal. He added, “As a two-year-old, he'd do it every time if you asked him. There were a few bits of work that really got the heart pumping. We went to the Gimcrack and I never like to be too confident – you're more hopeful than confident. But it didn't surprise me in the slightest when he did what he did at York. It was an exceptional performance. Minzaal is easily the fastest I've trained. He was a very athletic horse who moved well and covered the ground. When he went up through the gears it was a sight to behold.”