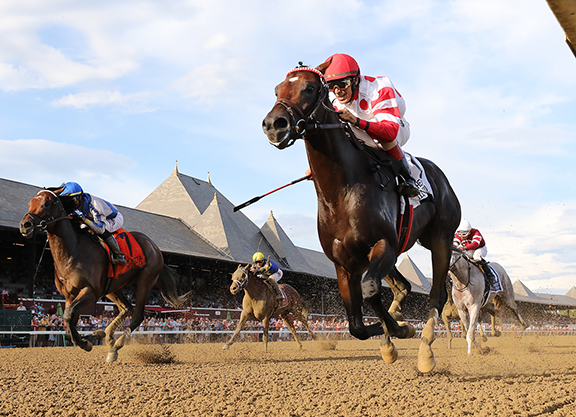 “Mind Control put in an excellent solo breeze and galloped out strongly,” trainer Todd Pletcher said. “He finished out in 1:14.33, 1:27.09, and got the mile in 1:41.71. Mind Control will ship to California Oct. 31 to put in his final preparations for the Breeders' Cup Dirt Mile.”

John Velazquez will have the mount in the Breeders' Cup, Red Oak Farm racing and operations manager Rick Sacco confirmed.

The day before his Breeders' Cup engagement, Mind Control's juvenile half-sister, Red Oak homebred Goddess of Fire (Mineshaft) will make her third lifetime start in the Tempted S. at Aqueduct.

“Goddess Of Fire is an improving filly and she should handle the added-distance races down the road,” said Sacco. “If the filly runs well in the Tempted S., we'll point her for the $250,000 [GII] Demoiselle S. at Aqueduct Dec. 4.”

Goddess Of Fire, a debut winner at Saratoga in August and most recently third in the GIII Pocahontas S., breezed a half-mile on the Saratoga training track Friday in :49.08 (8/45).

“Todd has been pleased with the filly's progression and he's been given the green light to take his time and let her mature at her own pace,” added Sacco.