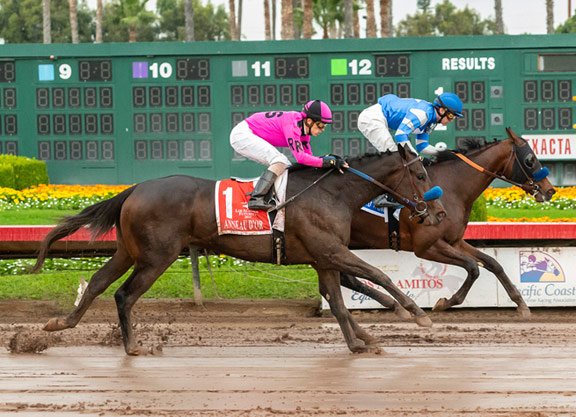 Thousand Words ran to the money in the GII Los Alamitos Futurity S. Saturday, which was previously run as a Grade I, providing Hall of Famer Bob Baffert with his sixth straight win in the event and 12th overall. Earning an 88 Beyer Speed Figure for his debut win at Santa Anita Oct. 26, the $1 million KEESEP buy was favored over his more experience stablemate, GIII Bob Hope S. victor High Velocity, while adding blinkers in this four-horse affair. Pressing his barnmate from second through opening splits of :22.47 and :45.87, Thousand Words poked his head in front entering the far turn. The Baffert duo battled stride-for-stride down the lane and were confronted by GI Breeders' Cup Juvenile runner-up Anneau d'Or in mid-stretch. High Velocity called it quits at that point, but Thousand Words boxed on, re-rallying when headed by his foe in late stretch to secure the victory.

“Turning for home I thought I could run one-two,” Baffert said. “But then I saw [Anneau d'Or] and I thought, `Oh no, he's going to get us.', but [Thousand Words] was game. When that horse came to him he took off and when he came back after the race he wasn't even blowing hard. Distance isn't going to be a problem. That's impressive when they can win like that second time out. [High Velocity] never really relaxed and was a little too keen early.”

The Hall of Famer continued, “Los Alamitos has the best surface and everybody's happy to work here. To come here and win at my old stomping grounds is a big thing. Good to get a win like this with a colt like this and I thought he was visually impressive today. I told [jockey Flavien] Prat before he ran that I thought I had found a good one for him for the [GI] Kentucky Derby next year.”

Thousand Words is the 29th black-type scorer and 14th graded winner for his late sire Pioneerof the Nile. His dam Pomeroys Pistol won a trio of graded events and finished second in both the GI Prioress S. and GI Test S. Her 2018 foal by Pioneerof the Nile passed away and she produced a colt by Hard Spun Apr. 12 of this year. She was bred back to champion Arrogate.